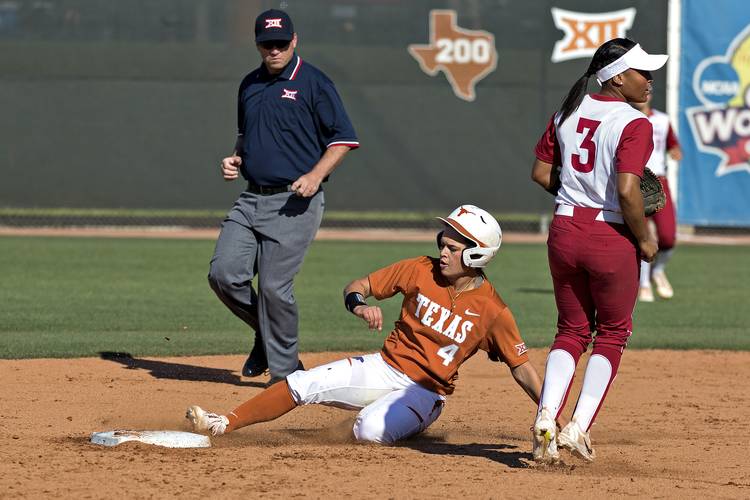 On Sunday afternoon, Texas honored the accomplishments of the seven seniors on its roster.

Over the next week, Texas may get to determine just how long those collegiate careers last.

The Longhorns stalled offensively at McCombs Field as No. 17 Baylor pulled away with a 4-0 win in the regular-season finale for both teams. The loss dropped Texas to 30-22, and the Longhorns now enter this week’s Big 12 tournament in Oklahoma City with uncertainty attached to their NCAA tournament hopes.

Regardless on Sunday’s outcome, Texas was locked into the fourth seed in the conference tournament. Texas will battle Oklahoma (47-8) and Texas Tech (18-34), the conference’s top and sixth seeds, in Friday’s pool play. If it floats to the top of its pool, Texas will play in the Big 12’s championship game on Saturday. The Big 12 last hosted a tournament in 2010.

“We didn’t have the season that we wanted,” said senior Mickenzi Krpec, whose team opened this past week with an RPI of 34. “I feel like if take that it into postseason and learn from what we did, I think we’ll flip it around and it will be a good postseason for us.”

Following her complete-game performance in Saturday’s 3-1 win over Baylor, Texas senior Tiarra Davis continued to silence a Baylor offense that was leading the conference with its .329 batting average. In what was likely her final start at McCombs Field, Davis struck out three and held Baylor to a hit. Davis, however, had started on consecutive days only once this season, so Texas went to its bullpen after the left-hander threw 30 pitches over three innings.

Senior shortstop Devon Tunning doubled on the first pitch the Longhorns saw from Selman, but the Baylor ace successfully danced with danger throughout the afternoon. Texas collected eight hits and had runners reach second base with less than two outs in the first, fourth, sixth and seventh innings. The Longhorns, however, were shutout for the fourth time in 2017.

“We had some mishaps in regards to some poor decision-making, and you can’t do that against a good ball club,” said Texas coach Connie Clark. “We did have our chances.”

Selman struck out five Longhorns, and catcher Sydney Christensen also assisted in the shutout. Christensen, a junior, recovered a wayward strikeout pitch with two outs in the fourth frame, throwing Bekah Alcozer out at first base with a Longhorn on third. In the sixth, Christensen stopped a pitch in the dirt in time to catch fellow catcher Taylor Ellsworth in a rundown between second and third base.

The victory was Baylor’s first in Austin since 2011.

Thanks to @TexasSoftball for honoring our seniors on Senior Day here in Austin! pic.twitter.com/f4HiDO2QfC

Rounding the bases: In addition to its seven seniors, Texas also recognized a quartet of Lady Bears. Lindsey Cargill, Riley Browder, Hawkins and Selman were given flowers before the game. … Ellsworth, a freshman from nearby Georgetown, went 2-for-3 to raise her team-leading batting average to .422. … Tunning and Krpec both had two hits, and Tunning also reached base on an error. … Davis now has 496 strikeouts in her career. Only five pitchers in Texas history have reached the 500-strikeout mark.

Class of 2017: There was a wait, but Damion Miller is ready to join Texas