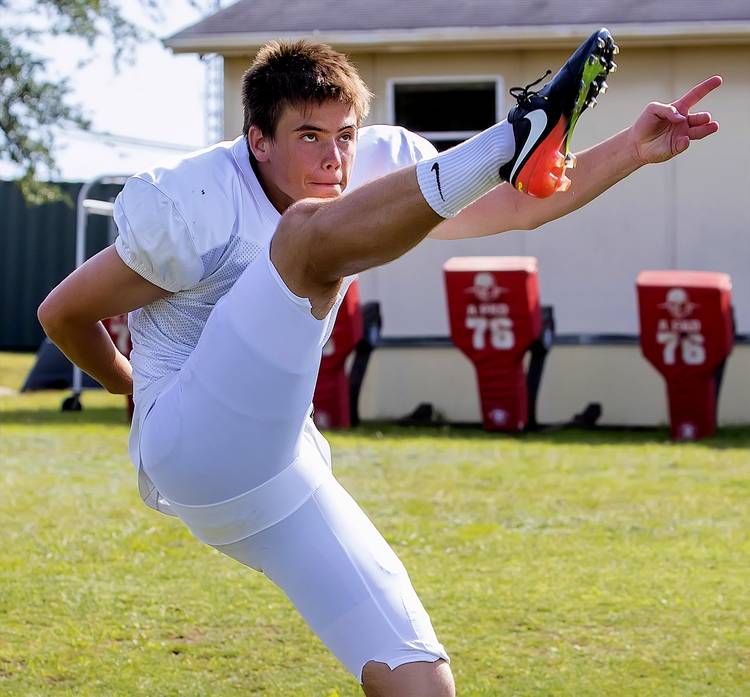 The Cavaliers, who had lost their opener to Converse Judson, found themselves down three on the road to Cibolo Steele. That’s when Cameron Dicker — Lake Travis’ kicker, who committed to Texas last week — walked onto the field facing a 46-yard field goal, hoping to tie it up and send the game into overtime.

“As a kicker, you’re either the most liked player, the most hated player or you’re just there. Most of the time, we’re just there,” Dicker said. “I walked out onto that field and it hit me that this game was on me. I thought to myself ‘If I don’t make this one, it’s going to be bad.’ But everyone was encouraging me, and for a kicker, it doesn’t get more fun.”

Dicker made the kick. Lake Travis went on to beat Steele in overtime and even its record to 1-1, avoiding that drop to 0-2. The Cavaliers then ran the table toward a Class 6A Division II state championship — one year after Dicker experienced state championship game losses as part of the school’s football and soccer teams.

“I felt cursed as a sophomore,” Dicker said. “To get that close to championships in both sports and come up short was tough.”

Texas offered Dicker on April 27. The two-star prospect committed to the Longhorns a week later, becoming UT’s seventh commitment of the 2018 class on May 4. Charlie Strong and his previous UT staff didn’t offer scholarships to prep kickers. Not a lot of programs do. But Tom Herman showed that special teams are important to him by making Dicker a priority.

“It felt good to get an offer and know Texas was that confident me,” Dicker said. “Being on campus and around the coaches felt comfortable. It felt like a family. All the work I’ve put in as a kicker paid off. It was a good feeling.”

Dicker took a strange route to becoming a college recruit. He grew up in Shanghai and didn’t play football for the first time until the fifth grade when American parents in Shanghai organized a youth league. Dicker said his first punt attempt went five yards. He moved to Lake Travis at the start of middle school and went out for the football team as a seventh grader.

He ended up on the “A” team. As the starting left guard.

“I wasn’t very good at kicking.” Dicker said. “I grew up watching soccer and playing soccer because that was the biggest sport where I grew up. In eighth grade, I told the coaches I wanted to only concentrate on kicking. I felt more comfortable doing it and I’m happy working on things on my own. It was my own path and it made me stand out.”

It was a good decision. In his two varsity seasons, he is 20 of 25 on field goals, with a long of 46 yards — the one that forced overtime against Cibolo Steele. He’s converted 161 of his 163 extra points. He doesn’t think he’ll be used as a punter in college, just place-kicking and kickoffs.

He’s also a star on the soccer field, but he knows those days are numbered.

“I’ll be hanging up my (soccer) cleats in college; I can’t afford to get hurt,” Dicker said. “I’ll still probably play with family and friends, but nothing major. It’s sad because that is my favorite sport, but I’m realistic and know this is a big opportunity for me.”

Dicker spends most of his football life in isolation. After warmups, he and the rest of Lake Travis’ kickers move to a different field and work individually until the final 15 minutes of practice for team drills. Dicker doesn’t compare the position he plays to anything football-related. He prefers using golf as an example.

“As a kicker, you’re playing against yourself,” he said. “It’s not about who is stronger or faster. There isn’t a guy in front of you that you need to beat. It’s all about muscle memory and consistency. It’s a mental battle as much as a physical one, if you’ve put in the work and trust your teammates to get the snap, hold and blocking correct. All kickers can feel secluded and relate to that stereotype of being a kicker. But the big chances make it worth it.