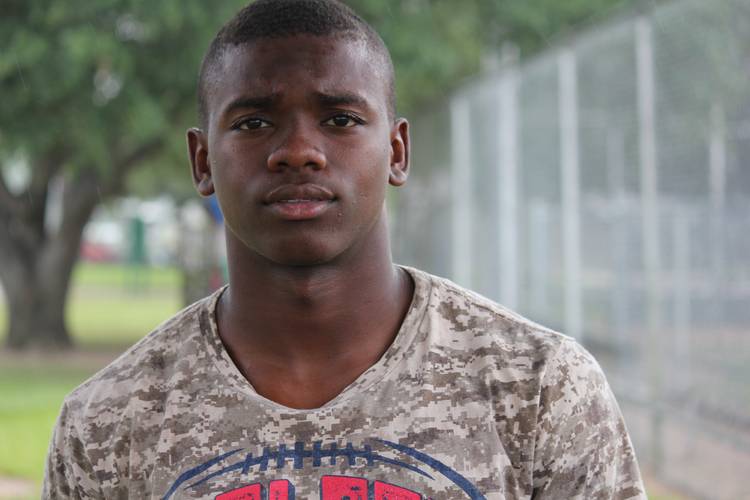 Anthony Cook is a wanted man. Each day during the spring evaluation period, a different school, and usually more than one, stops by the athletic office to talk to the Houston Lamar cornerback. Before Lamar’s 7-on-7 practice, it was Notre Dame. Ohio State had stopped by earlier in the week. It’s hard to keep track.

“Freshman year is when I started realizing I could do something with football,” Cook said. “The culture here at Houston Lamar for cornerbacks is fantastic. When I got here, it felt like I had no choice but to be next. There is a certain standard to uphold. Defensive backs go to college here.”

Cook can attend any college in the country. The 6-foot, 168-pound five-star corner is the No. 1-ranked player on the Fabulous 55. He’s the No. 10 overall national prospect and the No. 2 cornerback prospect for the entire 2018 class, per 247Sports’ composite ratings. Cook learned from previous Lamar standouts who went on to play in college, including current Texas defensive backs John Bonney and Holton Hill. It’s why they call the school DB High.

“I watched the way they walked. The way they talked. I wanted to do everything like those guys so I could be where those guys were,” Cook said. “It is my turn to set that standard for the younger cornerbacks here at Lamar and I try to stay humble and remind myself of that all the time.”

A five-star status means a choice of schools. Cook holds 35 offers, and that number would be higher if other schools thought there was a chance to gain his signature. He was invited to The Opening Finals this summer in Oregon and has already accepted an invitation to play in the U.S. Army All-American Bowl in San Antonio next January.

He cracked the varsity ranks as a sophomore, finishing the year with six interceptions, three of those returned for touchdowns. He had four interceptions as a junior. But don’t mistake the dip in production for a lack of quality. Opposing offenses rarely look his way.

Early in his sophomore year is when Cook said he learned that he could play football at the high school level. Against Port Arthur Memorial in the third game of the season, the Titans threw at the receiver he was covering five times. Cook said he deflected each one and also got in a big hit.

“I knew I could be good at this,” he said. “Now it feels like I only get a chance once or twice a game.”

The camp circuit provided Cook a chance to compete against the top competition in the state. Twelve of the top 15-ranked members of the Fab 55 are from the Houston area. The state’s top three wide receivers — Lamar teammate Al’Vonte Woodard, Manvel’s Jalen Preston and Alief Taylor’s Brennan Eagles — all competed at The Opening regionals and in the Under Armour All-America Camp Series. It was a proving ground for Cook.

“At the camps, I try to go out there and compete and show everyone I’m the best. I’m trying to prove it to them,” Cook said. “It’s fun. There are a lot of great players in this area. Bragging rights are definitely on the line.”

The accolades are fun. The press is exciting. The opportunities are endless. Still, Cook is a teenager and a high school student. He’s relying on help to get him through a tough and relentless process of major college recruiting.

“I put God first,” Cook said. “As soon as you start looking at this like a burden, it all goes away. I pray to God about my decisions and what is going to happen next. I know it is going to be a hectic year for me. It’s part of the plan and I’m going to stick to it.”

That plan includes focusing on the important characteristics of his future school. Not the glitz and glamour.

“I filter the B.S. It is easy to know what is real and what isn’t,” Cook said. “I weigh and evaluate my options. I need to know my position group is elite. Next, I want to know about strength and conditioning because that is who I’ll be with the most in college. And then, whichever school feels like home and I’m most comfortable.”

Cook and fellow Lamar cornerback D’Shawn Jamison — also a Fab 55 member — are ready to carry the torch for the school’s secondary and pass the torch to the next bunch. Cook is aware of where he needs to improve in that aspect.

“I know I need to become more of a vocal leader because I don’t talk a lot,” he said. “I try and lead by example, but I need to be more vocal about where each person needs to be. We can be really good if everyone keeps their head on right and we communicate.”