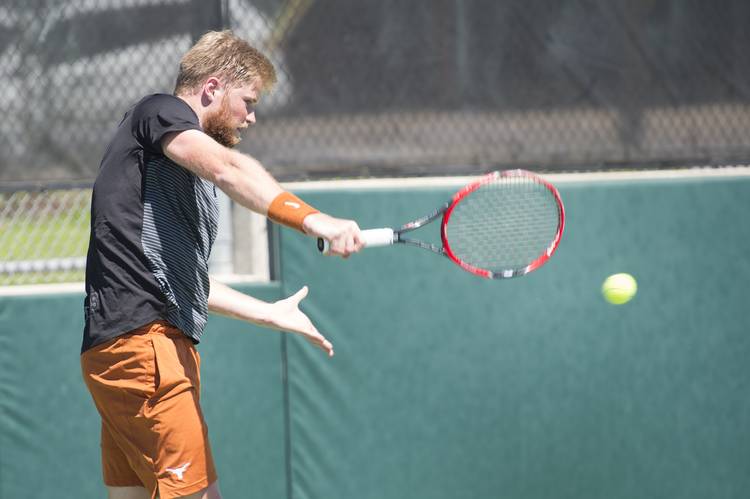 This all started on a tennis court in Spain.

About 10 years ago. Back when Christian Sigsgaard loved soccer and tennis wasn’t even in the picture. But on a family vacation in Spain when Sigsgaard was 10 years old, there were no soccer fields where his family was staying. Only tennis courts.

“I just started playing with my dad,” Sigsgaard recalled. “And I just continued improving.”

He liked the sport. Thought it was fun. So when Sigsgaard’s family returned home to Naestved, Denmark, he joined a tennis club, and started learning about the fundamentals of the sport — how to serve, how to hit a backhand, how to hit a forehand, how to train.

Sigsgaard quickly climbed up the amateur rankings in Denmark, becoming the top-ranked junior in the country in the Under-16 division. He represented Denmark twice in the Davis Cup, and was a three-time national singles champion and four-time national doubles champion there.

Sigsgaard now is a Texas freshman, and he’ll be on the court as the 10th-ranked Longhorns play Presbyterian in the first round of the NCAA tournament at the Caswell Tennis Center. He also received an invitation to compete in the 64-player singles draw May 24-29; he and Yuya Ito are the first UT freshmen to receive NCAA singles bids since 2008.

Sigsgaard is ranked 25th in the country in singles. But the rankings almost don’t matter. Not in tennis. Not in the NCAA tournament.

Sigsgaard’s journey to Texas and that No. 25 singles ranking was different. Unlike most collegiate tennis players, who began playing when they were four- or five-year olds, Sigsgaard didn’t pick up the game until five or six years later.

“I really wasn’t quite sure what to expect from him,” Texas coach Michael Center said.

Center didn’t know much about Sigsgaard when the freshman arrived at Texas. He knew Sigsgaard, 6-3 with a barrel chest, was a physically imposing player. To Center, Sigsgaard’s style of play reminded him of former UT standout Soren Hess-Olesen.

Hess-Olesen also was from Denmark; Sigsgaard actually knew him growing up.

“I was kind of looking to go to a university (in the United States),” Sigsgaard said. “I just spoke to him and I just had a choice to make.”

Sigsgaard’s move to the U.S didn’t come without its own difficulties, being in a different country, at a school filled with more 50,000 students and faculty and staff — which is about the population of his hometown.

Sigsgaard was surrounded, but alone. No friends. No family. Only his teammates and a racket and a ball. But the team helped him.

“The team has been really nice to me,” Sigsgaard said. “And I still talk to my parents back home.”

“In the beginning it was pretty tough,” Sigsgaard said. “It was pretty nice being up there, but I paid a little too much attention to the rankings.”

Said Center, “He started putting pressure on himself. That’s pretty standard; I think it was a challenge for him. Everyone’s shooting for him.”

Center encouraged Sigsgaard to not pay attention to the rankings. Just focus on his game.

Sigsgaard did just that. He finished the season with a 25-15 record and achieved his goal of making the NCAA tournament. Now his focus shifts to the Longhorns’ opening match on Friday and to the rest of the tournament, where the rankings don’t matter and anyone can win.