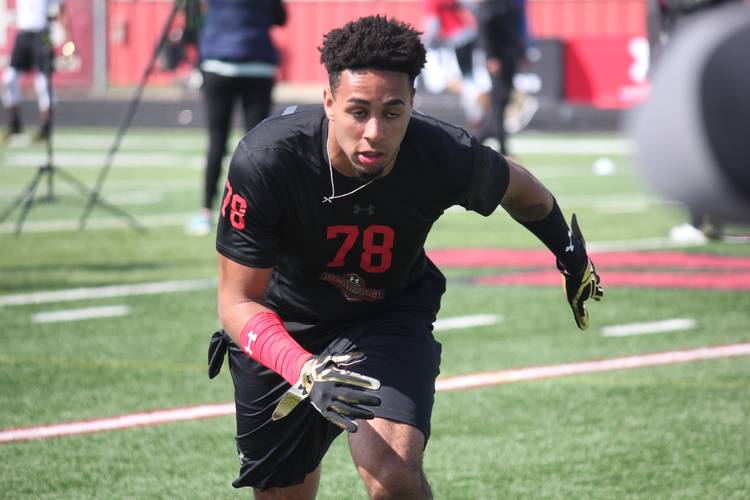 Caden Sterns returned home Saturday night after an unofficial visit to Texas. The four-star safety from Cibolo Steele sat outside with him mom and talked. Then there was silence. And then Sterns spouted out words that would change the course of his future.

“I told her, ‘I know where I’m going. I’m staying home,’” Sterns recalled. “It was the best decision for my family and myself.”

Sterns is big on family. His brother, Jordan, was an all-conference safety at Oklahoma State and recently signed with the Kansas City Chiefs as an undrafted free agent. He watched his older brother prove doubters wrong at Oklahoma State and believes the same thing will happen with Jordan’s NFL career.

“I can’t put into words how much my brother has influenced my life and led me through so many things,” Sterns said. “We’re humble kids from humble beginnings trying to make it for our family.”

Sterns also lives with three younger cousins, which helped influence his switch from LSU to Texas.

“My cousins don’t have many role models in their life outside of me, my brother and my step-dad,” he said. “It’ll be good for them to see me go to college and live my dreams. I’ll get to see them nearly every other weekend and they can watch how to go through it and prosper. That was a big influence on me, along with all the other great things Texas provides.”

Beyond Texas’ facilities and tradition, Sterns fell in love with the scheme Longhorns defensive coordinator Todd Orlando plans to implement. Sterns is a 6-1, 192-pound four-star safety prospect ranked No. 4 on the Fabulous 55. He’s the No. 39-ranked overall prospect in the nation and the No. 4-rated safety in the country, per 247Sports’ composite ratings, but he’ll begin his UT career at a different position.

“They want me to move around and start me at boundary corner,” Sterns said. “Their vision on how to use me was one of the deciding factors along with my family. I’m going to start at corner and then play safety and some nickel. I want to be a versatile player and I think I can excel at all three positions. That will separate me from other players.”

Stern’s Cibolo Steele team reached the Class 6A Division I championship game in 2016. He recorded 82 tackles, six pass breakups and four interceptions. He returned three of those interceptions for touchdowns and added 302 yards and five touchdowns as a receiver. He also returned a punt for a touchdown.

“We knew we had a player on our hands because his brother, Jordan, was on the team and we figured his little brother would be talented,” said Steele head coach David Saenz. “I was the defensive coordinator when he first arrived at the high school and it was obvious he was going to be special. He gets all this attention, but he’s still the first player working out and holding players responsible. And we’ve never once had to worry about him off the field.”

The recruiting process can be stressful for elite recruits and under-the-radar talent. Each path presents challenges. Sterns committed to LSU as a junior when Ed Orgeron was named head coach. A player like Sterns can pick from nearly any college in the nation. He holds offers from programs like Alabama, Oklahoma, Michigan and UCLA. The list would be longer if teams thought his previous commitment to LSU wasn’t solid.

“It’s tough at times,” Sterns said. “The key is to look at the positives and have a strong support system. Between God and my family, it made the process easier. It’s a blessing to have the options I was given and I needed to make the right decision for us. If you remember what and who is important, recruiting is a great thing.”

Stern’s focus now switches from his own recruitment to helping Texas build a strong 2018 class. The current group, which is now eight members deep, is ranked No. 10 in the nation. Sterns expects a higher finish.

“We want to bring a national title back to Texas. If all the best players in Texas, stay in Texas and play at Texas, we’ll get back to where we were,” he said. “I’m already working on guys and letting them know we need them to accomplish our goals. I want to surround myself with players who want the same thing and that is to win.

“I think we’ll have the top class in the nation by national signing day.”

If Texas’ Andrew Jones can ‘crack the first round,’ he’ll stay in the NBA draft

Class of 2017: A possible “steal,” Daniel Young looks to stand out in Texas’ backfield