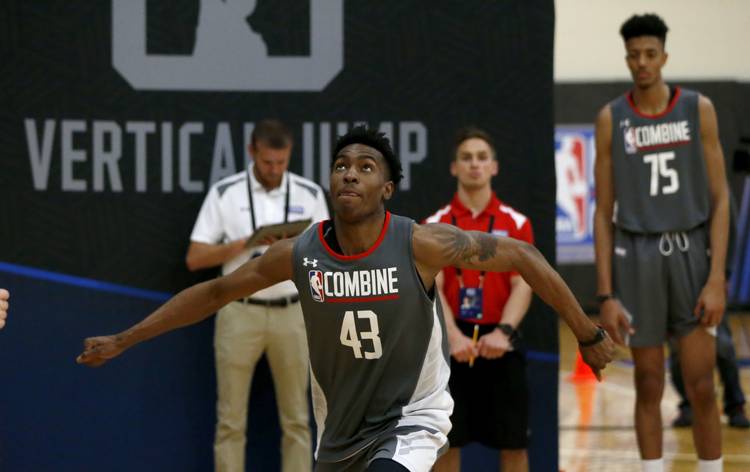 CHICAGO — The NFL draft was a borderline disaster for the Big 12.

Only 14 conference players were selected out of 253 picks over the three-day draft, the fewest since the Southwest Conference and Big Eight merged in 1996. Texas had only one pick in that lot — running back D’Onta Foreman.

The conference may have better luck with the NBA draft this summer. Six Big 12 players were taken last year, headlined by Oklahoma star Buddy Hield. Another half-dozen or more might be among the 60 selections this June, if the projections are accurate.

DraftExpress.com has six Big 12 players listed in its two-round mock draft. Kansas’ Josh Jackson (No. 3), Texas’ Jarrett Allen (No. 13) and Oklahoma State’s Jawun Evans (No. 28) are all slotted as first-rounders. Jackson and Allen are freshmen while Evans is a sophomore.

“You see a lot of seniors come out of the Big 12, the four-year guys,” said Kansas State’s Wesley Iwundu, another NBA scouting combine participant who met with the Spurs. He’s also projected to be a second-round pick.

“That’s what makes the Big 12 so tough,” he added. “With all of us being here, you have no choice but to respect the Big 12 and what it does for its players. Great league, great competition. You just go in there every night and work hard, you can have a chance to get here.”

Mason was grilled by the Chicago-based media on Thursday after word spread that he might be grabbed by the Bulls. He’s a rare bird at this event, one of those four-year players Iwundu mentioned. Surrounded by one-and-dones, Mason had the same cool confidence that defined his time in Lawrence.

“Ever since high school, I didn’t get the respect I deserved, but I didn’t pay attention to that,” Mason said. “I always knew what I was capable of and what I could do. I just focused on the things that I could control and try to get better each and every day.”

Morris played four years in Ames and left as the school’s all-time leader in most point guard categories. He also faced a throng of reporters having played two seasons for current Bulls coach Fred Hoiberg.

“My interviews went great,” Morris said. “I looked everybody in the eye. I gave them honest answers.”

It’s a difficult proposition for NBA executives. Which is better: A one-and-done player with tremendous talent but lots to learn, or a grizzled, developed player who is ready to go now?

Many Texas fans thought Isaiah Taylor should’ve stayed in school one more year. He left early, did not get drafted and landed in the NBA D-League. But he kept working, improved his shooting and wound up on the Rockets’ roster by season’s end.

The biggest knock on Big 12 basketball is that it’s a league full of talented players and coaches, but one that doesn’t live up to its full potential. Even Big 12 powerhouse Kansas, with 13 consecutive Big 12 titles, has only two Final Four appearances under coach Bill Self. Granted, he has a 2008 national title ring, too.

Last season, the Big 12 had the second-highest RPI of any league in Division I, just a fraction under the ACC. This conference has star power, to be sure. Coaches Shaka Smart (Texas), Bruce Weber (Kansas State) and Steve Prohm (Iowa State) were all on hand at the Quest Multisport gym to watch their players continue their dreams.

The league bills itself as the best basketball conference in America from top to bottom. Next month, we’ll find out if NBA executives agree.

Class of 2017: A possible “steal,” Daniel Young looks to stand out in Texas’ backfield