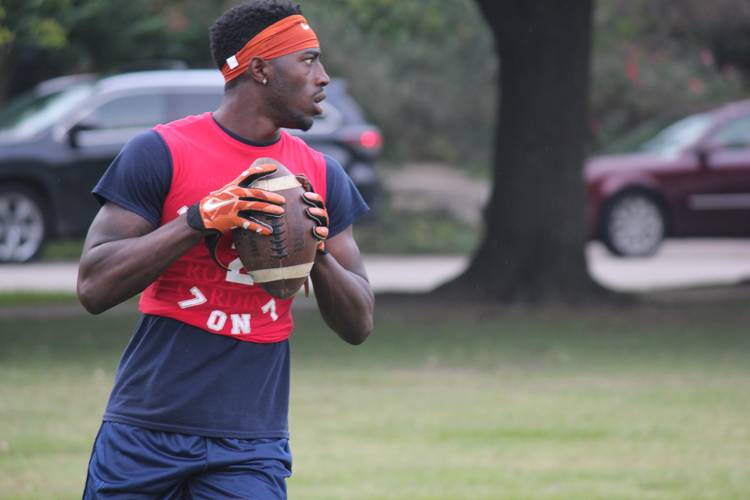 D’Shawn Jamison is ready to continue the tradition of DB High. The four-star cornerback from Houston Lamar is the 16th-rated cornerback in his class and the No. 121st overall prospect in the entire nation, per 247Sports’ composite rankings. He’s a member of the Fabulous 55 and holds 28 scholarship offers.

Yet, there’s a chip on his shoulder.

“When people doubt me or rate me lower than some other cornerbacks because of my height, it does add more fuel. I take it as an insult,” said Jamison, who’s 5-10, 174. “My height doesn’t determine the type of player I am. I’m as good as anybody.”

It’s a bold statement. Jamison is familiar with uber-talented cornerbacks. He started his high school career watching current Texas defensive back Holton Hill become an elite prospect who garnered attention from around the country. And Jamison’s teammate, Anthony Cook, is the No. 1-rated player in the state and the No. 2-ranked cornerback in the country.

“I switched positions to play defensive back at Lamar because we’re known for putting cornerbacks in college. I was a running back before high school,” he said. “It was a tough position because it seemed so easy in middle school and I always had the ball. It took me some time to adjust to the speed of the game and change positions in high school.”

Texas is among Jamison’s top schools. He wouldn’t be the first player to go from DB High to DBU. TCU also is in the mix.

“The energy around Texas is amazing. I like them a lot,” he said. “I want to make a decision before senior season. I’m narrowing schools down based on how I feel with the coaches, the depth chart, academics and what it can offer after football for my future.”

Jamison admits a few schools are standing out, though he’s still listening to the top ones on his list and new schools that stop by Lamar to see him, Cook, wide receiver Al’Vonte Woodard and others. It was estimated that nearly 40 different colleges stopped by Lamar during its first week of spring practices. More are sure to come.

“It’s a tough process,” Jamison said. “It takes up a lot of time but you learn how to balance that. It’s cool to know guys who have gone through this process and be in the same class with teammates going through the same thing. We can kind of talk to each other and get a feel for what we’re thinking. I’m lucky to be here, though. It’s an exciting time in my life.”

Jamison enjoys excitement. It’s the former running back in him. The school that eventually lands his signature is likely the one that offers a chance at the most excitement.

“I want to play at different spots,” he said. “I’ve played multiple positions at Lamar and I pride myself on being versatile. I think I can play cornerback, nickel, safety and then return kicks and punts. Just let me touch the ball.”