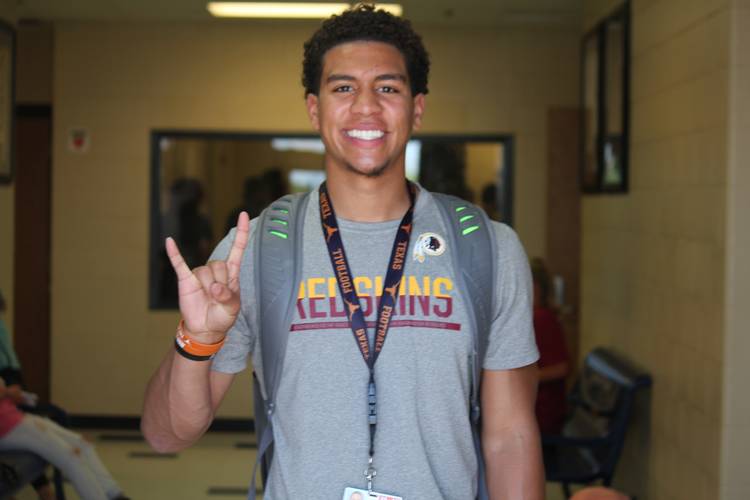 Casey Thompson chose a family feel over his family’s legacy.

He held an offer from Oklahoma, where his dad, Charles, and his brother Kendal both played, Thompson chose to cross the Red River when he committed to Texas on April 13 in his high school gym.

It was a shock to some, but not all.

“I let the coaching staff know a week before that I was committed,” Thompson said. “It felt like family each time I visited Texas. Tom Herman and his staff were straight with me and did a great job making me and my family feel like a priority.”

“It was cool (that) so many coaches who recruited me at previous stops came together at Texas and kept recruiting me,” Thompson said. “I knew I was a priority for the coaching staff because I was wanted by the head coach and offensive coordinator at their previous schools. It all came together.”

Thompson was groomed to become a quarterback. He began playing the position in the fourth or fifth grade, he said. He started playing football before elementary school, but he was a running back early in his career. His dad and older brother were college quarterbacks, though Kendal is now a wide receiver with the Washington Redskins.

“One of my strongest aspects is my mechanics, technique,” he said. “I’ve been training since I was 7 or 8. I was developed better than most kids at a young age. Ten years later, I’m a little ahead of most because I’ve been doing all these same drills my whole life. College coaches praise that part of my game.”

Thompson will face competition at Texas. The two quarterbacks already on campus — Shane Buechele and Sam Ehlinger — will be looking ahead to their junior and sophomore seasons by the time he reaches campus. And he’s also not the only four-star quarterback in the Longhorns’ 2018 class; after Thompson’s pledge, Texas flipped Cameron Rising, a four-star quarterback from California.

Competition isn’t new for Thompson, who claimed the starting quarterback spot at Southmoore (Okla.) as a freshman, beating out a sophomore who had started as a freshman. Through three years, Thompson has accounted for 109 total touchdowns and 8,730 yards of total offense. He’s passed for 70 touchdowns to just 17 interceptions.

“We talked about the Rising commitment. He said he wasn’t worried about it,” said Southmoore head football coach Jeremy Stark. “There will be a kid highly recruited before and after you and he’ll need to compete no matter what grade a player is in.”

“We’re rolling now,” Thompson said of the class. “We all want to be part of something special, and Texas is on its way back up. I can’t name names, but there are more players ready to jump on board. This class will be special.”

And he’s not too worried about the backlash from angry Oklahoma fans mad at him for choosing the Longhorns.

“I think that growing up in Oklahoma and being here, Oklahoma talks more trash about Texas than the other way around. I’ve been in Texas a lot and they don’t talk that much trash about Oklahoma,” he said. “OU fans worry about Texas fans a little more because it is the big rivalry for Oklahoma, where Texas is everyone’s rival. Oklahoma fans throw the Horns down even when they’re playing other teams.”