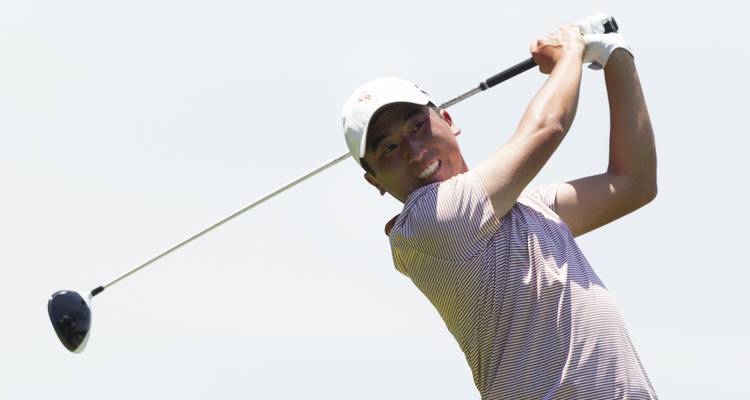 Doug Ghim’s roots in golf were not planted at a country club, like some other collegiate players, but in a Chicago-area backyard with a net designed to prevent balls from flying into the neighborhood.

“He couldn’t even go to the driving range because it was too expensive,” recalled his father, Jeff. “He was 7 and trying to hit 1,000 balls a day on the weekend, 500 during the week. So I made a net.”

Ghim has done all right for himself. Thanks to his diligence and an American Junior Golf Association ACE Grant that helped defray costs for travel and competition, Ghim earned a scholarship to Texas.

On Tuesday, he shot 2-under-par 69 to take the second-round lead in the NCAA’s Austin Regional at the UT Golf Club. The 54-hole event concludes on Wednesday. And the Longhorns, seeded third in the region, lost a nine shot lead during the round but rallied to finish four ahead of second place Oklahoma State, the top seed here, on a windy afternoon.

Ghim, a junior, is at 5-under for the tournament, one stroke ahead of Iowa State’s Nick Voke, whose 67 was the best round of the day. Longhorns Scottie Scheffler and Gavin Hall are tied for third, two back at 3-under.

Ghim took the individual lead with a 12-foot birdie putt at 17. He maintained it with a long chip that left a one-foot putt for par at 18. In the end, there was a measure of relief.

“It was getting a little dicey there for us,” Ghim said.

Jeff Ghim came to the United States from South Korea in 1984. He’s a golf teacher who has worked at several courses, public and private. His wife, Susan, is a flight attendant.

“We come from a humble family,” Susan Ghim said. “We did what we could.”

Now Ghim has a chance to show what he has accomplished to people closer to home. Five schools from the region will advance to the 30-team NCAA championship, which will be held May 26-31 at Rich Harvest Farms in Sugar Grove Ill., west of Chicago.

Ghim was the steadiest of the Longhorns on Tuesday with four birdies and two bogeys.

“It was great to bounce back,” Hall said.

Scheffler, the first-round leader after shooting a 66, came back with a 73 that included five bogeys, including one on 18, but also some highlights. He made a downhill 5-footer to save par on No. 8, a difficult par 3. He followed that with a 25-foot birdie on the par-5 ninth.

“I gave away some shots,” Scheffler said.

He did have at least one distinction. Scheffler was the only Longhorn who made par at No. 8. Ghim, Hall and freshman Spencer Soosman made bogeys. Steven Chervony had a triple-bogey after his tee shot bounced off the cart path and landed out of bounds. Chervony shot 76, one better than Soosman, whose score did not count toward the Longhorns’ total because only the top four among the five players are included each day.

No. 8 was not Chervony’s worst hole. He made 8 at the par-4 15th after hitting his tee shot into the trees, an unplayable lie, and requiring two tries to vacate the area. On the other hand, he made six birdies.

“So I know I’m on the right track,” Chervony said. “I just got loose on a couple of holes.”

Voke, the Iowa State senior from New Zealand, birdied three of the last six holes. But he seemed most pleased with a par at 18.

“My tee shot, I was a little nervous over that one,” Voke said. “I hadn’t been hitting my driver that great all day. I just popped one down the middle. It was from a place of courage.”

Four-star quarterback pledge Casey Thompson: ‘This class will be special’