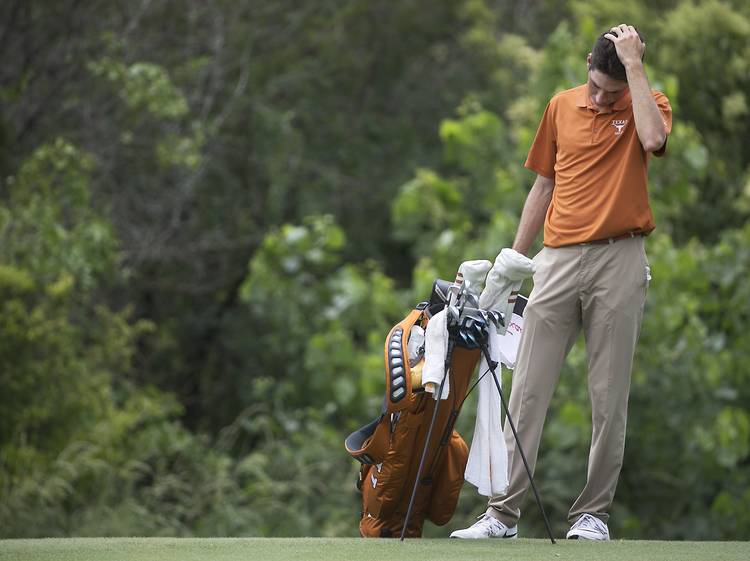 Texas golfer Steven Chervony reacts to closing his round with a double-bogey six on the par-4 18th hole during the final round of the NCAA Austin Regional at the UT Golf Club on Wednesday, May 17, 2017. CREDIT: Ralph Barrera/AMERICAN-STATESMAN

Oklahoma State caught Texas from behind Wednesday, shooting a 14-under par 270 to win the 54-hole NCAA Austin Regional by two strokes over the Longhorns at the University of Texas Golf Club.

Texas, seeded third in the region, led No. 1 Oklahoma State by four shots after two rounds. The Cowboys completed the event at 13-under.

“This is something that we really wanted,” Longhorn Steven Chervony said. “This is our home course, so for us not to win is a disappointment.”

Even so, Texas achieved what was necessary.

The top five schools from the region advance to the 30-team NCAA Championships, which will be held May 26-31 at Rich Harvest Farms in Sugar Grove Ill., west of Chicago. Iowa State, Ole Miss and Arizona State will join Oklahoma State and Texas.

The Longhorns were national runners up last season, losing the match play final to Oregon 3-2. Texas forfeited one of the five matches against Oregon because Beau Hossler, a five-time winner last season, suffered a shoulder injury in the semifinals that required surgery. The NCAA has since adopted a rule allowing teams to substitute another player in the match-play portion of the tournament.

Voke shot the best round of his life Wednesday, a 10-under-par 61, breaking the competitive collegiate record at the UT Golf Club by four strokes and winning the individual championship by five. Longhorn Bobby Hudson set the old record, 65, in 2008.

There were no slouches among Voke’s teammates, either. The Cyclones shot 21 under par Wednesday to finish in third place.

Longhorn Doug Ghim shot 67 and finished in second at 9 under par. Scottie Scheffler shot 66 for Texas and placed third at 8 under par.

Oklahoma State’s Viktor Hovland (67) and Kristoffer Ventura (69) tied for fifth at 3 under par.

Voke, a senior from Auckland, New Zealand, is the 95th best collegiate player in the country, according to golfstat.com computer rankings. He made eight birdies and an eagle, on the par-5 14th, in the final round. Voke hit a 3-iron 240 yards to the 14th green and then made a 17-foot uphill putt.

“To be honest, I woke up thinking a couple under would be a nice score,” Voke said.

Voke finished in a tie for 13th at the Big 12 Championship in late April. Even so, he regarded himself on the verge of something big.

“These days are very few and far between, but I knew with my game, and training, something like this could be on the horizon shortly,” Voke said. “It’s not necessarily out of the blue.”

Texas won the Big 12 by one shot over Oklahoma State. Though the Longhorns were disappointed Wednesday, they have confidence as the NCAA Championship approaches.

“We like where we stand,” Scheffler said. “We don’t like losing to anyone. Coming in second is no fun, but it was still a good tournament. We still have a lot of confidence going into Nationals.”

Fields said he is pleased with the Longhorns, who won two straight tournaments before finishing second this week.

“If you’d have told me at the beginning of the week that our team was gonna shoot 11 under par with the conditions that we’ve had, I would have said that is spectacular golf,” Fields said. “Oklahoma State played great today. They’ve been ranked as high as No. 1 this year.”