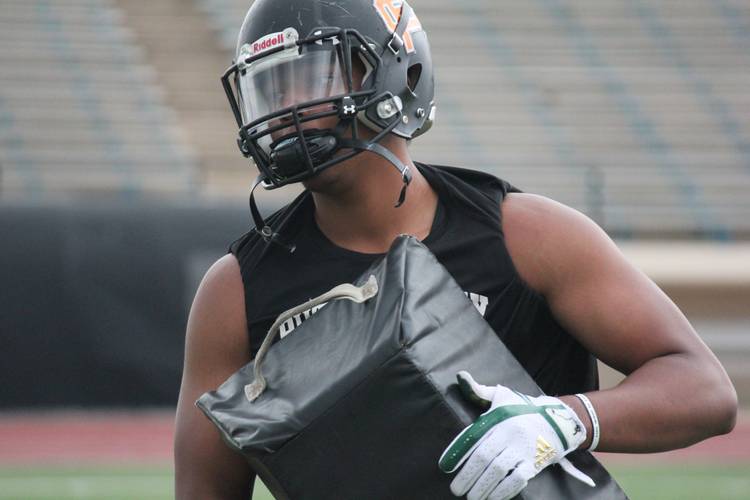 OKLAHOMA CITY — Ron Tatum III is an imposing presence. The 6-5, 270-pound defensive end commands respect on every football field. The Putnam City product committed to Texas over Oklahoma last month and is the lone defensive lineman currently pledged to the Longhorns.

Tatum is a big man with impressive film and four-star status. He’s already earned an invitation to The Opening Finals this summer in Oregon.

He just doesn’t talk much, unless he’s playing football.

“Ron is soft-spoken and doesn’t say a lot. He’s on the shy side,” said Putnam City head coach Preston Pearson. “He didn’t say much when he moved in. He just took care of his business and his teammates took notice of his consistency.

“On the football field, it is a different story. We can’t get him to shut up on a football field. He plays with an edge. He doesn’t end a play without a push and he wants to dominate every snap.”

Now Tatum’s job is to use his aggression to lead. Pearson wants him to be a vocal leader on the field because, frankly, he’s the best player on the team. Tatum moved to Putnam City High School from North Putnam before the start of his junior year.

“He was new to our school, so a lot of guys weren’t real tight,” Pearson said. “Now he’s been here a little over a year and now they push each other. He brings the other players up. His teammates know opponents will try to avoid him and that makes everyone else step up.”

Tatum’s the oldest of five siblings. His father, Ron Jr., lived in Phoenix when Tatum was young. Ron Jr. would train Tatum and his siblings during summers and holidays. Tatum now lives with his dad and went through the recruiting process with his father by his side.

“I knew the process of recruiting was coming for Ron,” Ron Jr. said. “We knew he had talent. He was always the biggest kid in his class. I noticed him racing up and down the street with the rest of the kids at like seven or eight years old. He was always on the chubby side, but he was winning the races. I knew he’d be an athlete with the right preparation.”

That preparation turned into scholarship offers during Tatum’s junior season. Kansas was the first to offer, on Oct. 10, 2016. Oklahoma followed two weeks later. Texas came into the picture on Jan. 19 earlier this year. The Tatums visited UT on Feb. 16 and the four-star end committed to the Longhorns at his school on April 26.

Tatum said he didn’t make his decision until the night before his announcement.

“I sat down with my family the night before and we talked about it. The next day, I chose Texas,” Tatum said. “It’s the family atmosphere at Texas. They treated us like family the first time we met.”

Tatum isn’t shy about his goals. He wants to play on Sundays. He has the frame and athleticism to play multiple positions. He’s quick enough to rush off the edge as a traditional defensive end and strong enough to take on interior offensive linemen against the run. As a junior, he compiled 80 tackles, including 12 tackles for loss and eight sacks. He also batted down three passes and forced a fumble.

“His mental state of mind is good. He knows where he wants to go, and that’s to play on Sundays,” Pearson said. “Anything that doesn’t help him go in that direction, he’s putting it off to the side. He’s focused on his goals. The normal high school stuff like proms and girlfriends come secondary. He’s football-driven.”

“If I’m not there, I know coach Giles can fill in for me with Ron,” Ron Jr. said. “Giles has a father mentality and I know he’ll push my son and keep him focused on his goals. We noticed what this staff was able to do against the better teams, especially Oklahoma, and it is exciting to envision Ron playing in that type of system.”

Choosing Texas sent shockwaves through the recruiting world. The state of Texas tends to produce more talent for the Sooners than the state of Oklahoma does for the Longhorns. Tatum was projected to pick Oklahoma until hours before his decision. He’s an Oklahoma boy and most assumed he’d stay in Oklahoma, even his dad.

“We went down to Texas and we both were like ‘wow,’” Ron Jr. remembers. “We went to other schools and didn’t get that same feeling. I wasn’t expecting much on the visit, but the coaches spent one-on-one time with us explaining their vision and goals for the football team and Ron. Tom Herman is detail-oriented and it showed. It gave us great confidence in Texas.”

Texas holds eight commitments for the 2018 class. It ranks 10th in the nation, per 247Sports’ composite ratings. Tatum is predicting even more fortune for the Longhorns.

“With the way this class is going, it’ll be the best in the nation,” he said.