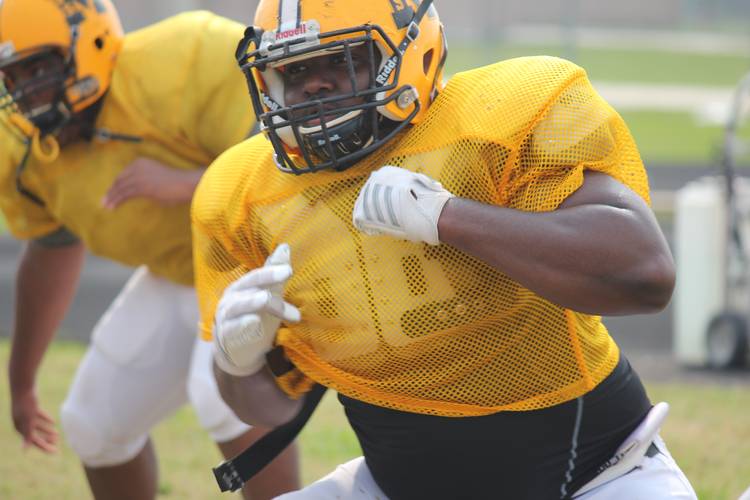 MISSOURI CITY — The football rivalry between Texas and Texas A&M still exists. Instead of the two teams meeting on a football field every Thanksgiving, the Longhorns and Aggies square off for elite prospects around the state.

One of the top priorities for both teams in the 2018 class is offensive line. And Fort Bend Marshall guard Barton Clement — a 6-3, 300-pound four-star prospect and the top-rated interior lineman in the state — faces a tough choice.

“Texas A&M and Texas are the two schools standing out right now,” Clement said after a Marshall practice. “At A&M, I really like the vibe with the players. At Texas, the energy and passion of Tom Herman is infectious. He’s always having fun and energetic.”

Clement is a stereotypical offensive lineman, and he’s OK with that perception. When asked about hobbies outside of football, he’ll say he likes to lift weights. Football and school, he said, are the two most important parts of his life right now, along with his family.

He’s the 192nd-ranked overall prospect in the country, and the No. 7-ranked guard in the nation per 247Sports’ composite ratings, and he’s the No. 8-ranked member of the Fabulous 55.

Clement has always been laser-focused on football. Like most kids, he started playing sports mostly due to boredom.

“I didn’t get serious about football until after my eighth grade year,” he said. “During middle school, I played it so I had something to do after school. Once I met with the coaches at high school and saw the intensity and family atmosphere we have here at Marshall, I knew I wanted to get better and help the program.”

The next program he helps must offer the same type of family atmosphere, he said.

“Team sports are more rewarding than individual sports because it takes us all coming together to achieve one goal. There can’t be weak links,” Clement said. “I’m going to choose the school that offers the same type of family environment I’m used to playing in, as well as the engineering school.”

Clement is one of six interior linemen in the 2018 class holding a UT offer. Marshall’s Chasen Hines committed to LSU this spring. That leaves Allen’s Trey Stratford as the other in-state prospect with an offer, with UT’s other three offers — Jamaree Salyer, Trey Hill and Sione Angilau Jr. — all out of state.

Clement said he’d like to make his college decision before the beginning of the football season. Texas A&M should be considered the leader.