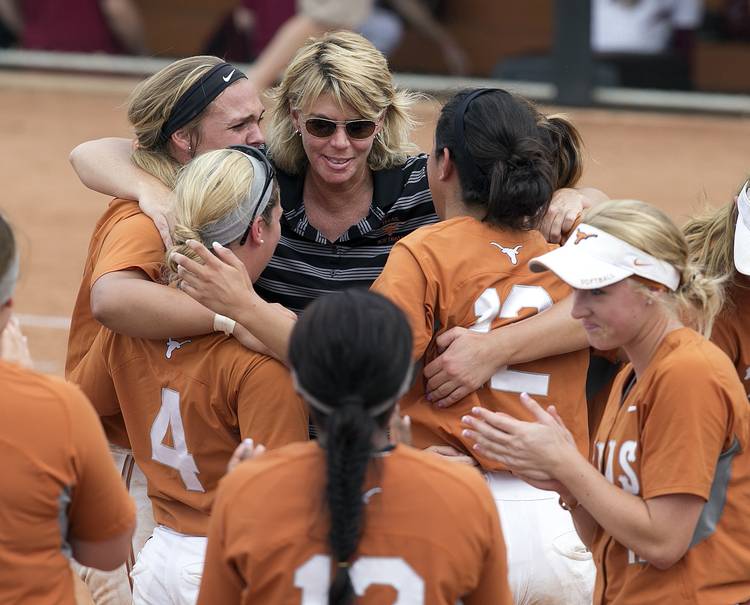 The Texas softball team definitely was nervous as they watched the NCAA unveil its tournament bracket earlier this week.

They were no lock to extend their post-season streak to 13 years, what with a 31-24 record — including being 3-15 against ranked opponents — and a weak showing in the Big 12 tournament. The Longhorns beat Texas Tech to open play, then were shut out by Oklahoma and Baylor to close their time in Oklahoma City.

But the NCAA allowed the Longhorns in. There wasn’t even that much drama since the Longhorns were assigned to one of the first regionals revealed.

Coach Connie Clark said she did the tournament math a week ago and figured Texas would receive the invitation. But there are always nerves, she said, even in the best of seasons.

“We had a little bit of anxiety,” admitted pitcher Erica Wright. “It was a relief when we were called.

“For sure, we really want to go out there and prove them right for picking us and putting us in the tournament.”

The NCAA carved out an all Lone Star regional, sending Texas, Texas State and Texas Southern to College Station with Texas A&M as the top seed. The third-seeded Longhorns meet the No. 2 Bobcats Friday, followed by the Aggies against the Tigers.

On the eve of the NCAA tournament, the goal of each of the 64 invited teams is to be one of the eight survivors to earn a trip to Oklahoma City, the annual site for the Women’s College World Series. But reality suggests that the top programs usually are the ones who thrive in May.

The Longhorns are desperate for a season reboot, hoping the familiarity of a Lone Star regional will help them right what went wrong this year, which is setting up to be their worst, record wise, since 2008. That year the Longhorns were 29-23-2.

“I don’t think this team has been real consistent this year,” Clark said this week. “We’ve talked about that for the last three weeks. At some point we have to move forward and never take a step back. … We’re still playing. You still have an opportunity to move forward and to not take any steps back. I think we’re well prepared.”

The Longhorns have played 32 games against 17 teams that qualified for the post season. They are only 10-22 in those. However, just under half of the losses were one-run affairs.

So fix the consistency issue and maybe the Longhorns can extend their season.

Texas State already has beaten UT twice this season. Both of them were 2-1 victories with Bobcats star pitcher Randi Rupp earning the victories. Cat Osterman, the former Longhorns great, is on the Texas State coaching staff and calls pitches for Rupp, who has 940 strikeouts in her career.

Texas State wins are rare against the Longhorns. They’ve played 48 times since 1997. Texas has won 36 of the contests with the Bobcats collecting consecutive victories only on two other occasions.

Texas State never has won three in a row over UT.

“I know since we did get beat by Texas State twice we’re not looking to let that happen again,” Wright said.

The Longhorns haven’t made it past the regionals since 2013, when they finished in a tie for third in the World Series. They have won their past three NCAA tournament openers and are 4-6 in tournament play in 2014-16.

“In the back of our hearts we know the end is near,” said UT senior Tiarra Davis. “But we want it to end in Oklahoma City.”

T.J. Ford, a famous Texas ex, now can call himself a Texas graduate