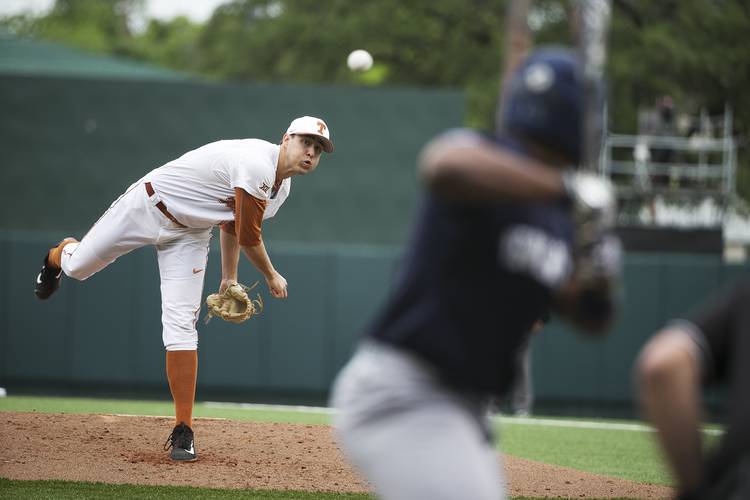 His Eagles open a best-of-three series against Waco Robinson on Thursday in the third round of the Class 4A state playoffs. His sister-in-law, Lindsey Cargill, is a softball standout at Baylor and the Bears are hosting an NCAA regional. At noon on Friday, Cooper’s younger brother — Morgan, a standout pitcher for Texas baseball — graduates from UT and then on Saturday he’s the Longhorns’ starter at home against West Virginia.

“This is the time of the year, it’s so fun,” Kreece Cooper said. “School is winding down but we’re still playing ball. Those two (Morgan and Lindsey) are going to be playing ball. We just hop in the car or truck and go watch.”

Morgan Cooper leads the Big 12 with 89 strikeouts and ranks third in ERA (2.27). Nationally he ranks 48th and 52nd in those categories. The right-hander, who missed the 2015 season with an arm injury, is 6-2 this year. He’s allowed more than three runs only once in his 12 starts. On Thursday, he was named one of 25 semifinalists for the Dick Howser Trophy, given annually to college baseball’s top player.

“As an individual I’ve been successful, but that’s not all on me,” Cooper said. “We have a good defensive team. I wanted to prove that I was better than what I showed last year and that this team that we had, this group of guys, we could win games, and I think we’ve proved that.”

In between the campuses of UT and Salado is Jarrell, the Coopers’ hometown. Morgan, who won a state title with the Cougars his junior year, was a freshman there during Kreece’s senior year. Morgan would play shortstop when Kreece was pitching, and Kreece would play short when Morgan was on the mound.

Morgan recalled that he “was so scared to make a mistake because I knew that if I did, Big Brother was going to kill me in the dugout or after the game.”

Kreece, though, was quickly impressed.

“We were playing Lago Vista at Lago … and it just felt like he was throwing a lot harder than he had in the past,” Kreece said. “I asked the guy with the gun and he said he hit 84, 85 that night as a freshman. That’s when I knew that he’s going to go do something.”

Cooper will graduate with a degree in sport management and a minor in business. He hasn’t committed to any plans for his future, but he acknowledged he probably won’t return to Texas. Cooper was a 34th-round pick in the 2016 draft; he’s expected to go higher this year.

If Saturday is Cooper’s final start at UFCU Disch-Falk Field, his family is at least hoping it won’t yet have to say goodbye to the ballpark. In June, Disch-Falk will host the UIL’s Class 4A state baseball tournament. Salado reached the 4A championship game in 2016.

Kreece Cooper, 25, was an assistant on that state runner-up team. The Mary Hardin-Baylor graduate was promoted to his first head coaching gig over the summer.

Despite losing seven starters, Salado (18-11-1) is back in the postseason’s third round. Pitcher Drew Dobbins is 11-1 with a 1.92 ERA  and senior Cullen Mckinney has caught all but one of Salado’s 189 innings. Offensively, Jacob Wilk and Tate Harvey have reached the 30-RBI mark and Ryan Oakes has scored 35 times.

Morgan Cooper hasn’t gotten to any of Salado’s games this year, but he did help out at an Eagles camp this past summer. Since he has typically thrown on Saturdays for UT, Kreece has gotten to a few of his outings. The brothers, though, don’t discuss baseball much when they get together. If they are discussing a sport, it’s going to be fishing or hunting.

“Not a whole lot of baseball,” Morgan said. “We get enough of that.”

Texas senior Kacy Clemens is hitting .307, but the .305 and .284 batting averages from Todd and McCann rank second and third among the Longhorns. Gonzalez is hitting .318 with 29 runs and 24 RBIs.

Following Texas’ 10-3 win over Incarnate Word on Tuesday, Todd said Gonzalez is “one of our good buddies.”

“Hopefully we can come out with three wins,” said Todd before a pause and a smile, “just like old times at Round Rock.”