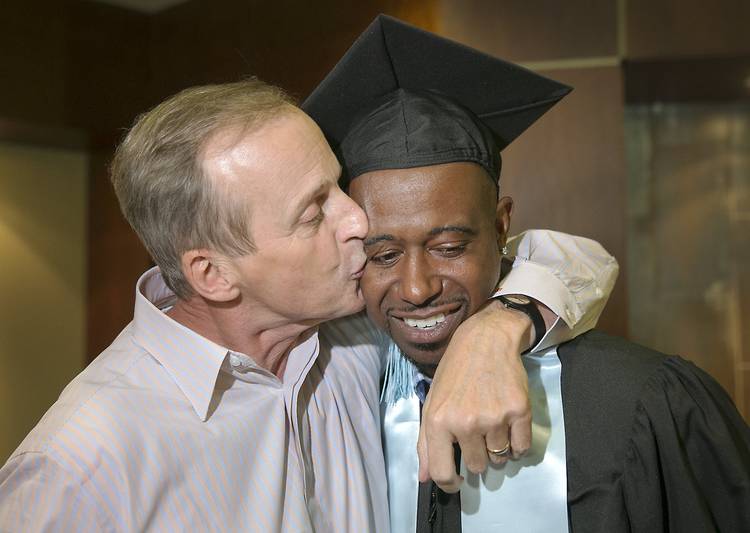 Former Texas star basketball and NBA player T.J. Ford returned to campus to finish his college career and graduate after several long years of work and invited his former coach Rick Barnes to be there. Barnes kisses Ford congratulating him on the long road and hard work it took him to finish his degree. Ford broke down in tears at the close relationship the two have developed through the years. The University of Texas at Austin athletic department held a celebration reception for it's 2017 graduates. RALPH BARRERA/AMERICAN-STATESMAN

There it was Friday, plastered all over T.J. Ford’s face. That magic, mega-watt smile that so many Texas fans fell in love with 14 years ago was on full display again inside Bellmont Hall.

Ford, the electric point guard who lifted the Longhorns to the 2003 Final Four, simply couldn’t help himself. Now 34 and a husband with three kids, he was ecstatic as he crossed off a personal lifetime goal.

One of the most famous Texas exes is finally a UT graduate.

“I’m so happy for him. ‘Proud’ is an understatement,” said former UT coach Rick Barnes, hugging his star guard. “When he called me about a month-and-a-half ago, he said, ‘Coach, May 19, I’m walking and you better be there.’ I said I wouldn’t miss it for anything. I love him. I love him.”

Barnes then pulled Ford in closer, and the two men nearly started crying. He whispered in Ford’s ear, “Really proud of you.”

Rick Barnes came back to #Texas to watch TJ Ford graduate 15 years after he first stepped on campus. Watch this emotional exchange: pic.twitter.com/prkmCPqvpO

Ford was one of 80 current or former Longhorns athletes participating in graduation ceremonies on Friday and Saturday. The athletic department is actively encouraging former athletes to come back and finish their degrees, something 1998 Heisman Trophy winner Ricky Williams did in December.

“Even when I got my acceptance letter back in, I kept it. It just meant a little more to me,” Shipley said. “I think it’s the fact that once you leave the routine of being a student-athlete, especially at Texas, it can get really tough to come back and finish.”

Over the last two years, Ford would drive to Austin from Houston, be away from his family for several days each week to attend classes in the School of Education, and then drive home. “It’s tough, I can definitely tell you that,” he said.

Defensive lineman Cory Redding had a 13-year NFL career after his final season at Texas in 2002. The youth and community studies graduate joked that he looked like a judge in his black gown. Redding said he wanted to finish what he started and finally qualify for a T-Ring, presented by the T-Association to athletes who letter for two years and graduate.

“I challenge all of my brothers and sisters — before me and after me who play ball in any sport — if they haven’t finished, walk across that stage, get their degrees and get that T-Ring, I challenge them to do it,” Redding added. “If they’re any competitors like I know they are, then I will hope they accept my challenge. That’s what family does. We hold each other accountable.

“So I challenge my brothers and sisters to do that. Make sure that’s in the paper.”

Ricky Brown, a former football player who now works for the T-Association, said the school is eager to help all former athletes who want to come back and finish their academics.

“I think there is a public push, but what I would call it is an uprising,” Brown said. “The reason I use that word is that, like Cory, it’s been outside in. People have thought more about the value of the degree and the T-Ring, and it has become a very important symbol.”

Plenty of current UT athletes were participating in graduation ceremonies. “This feels like I really accomplished something,” said senior Kendal Yancy, who posed with teammate Shaq Cleare and current UT men’s basketball coach Shaka Smart for photos. Both are education majors.

Said Miles, a journalism major, “On your worst day, I would look at the Tower and know there was nowhere else I’d rather be.”