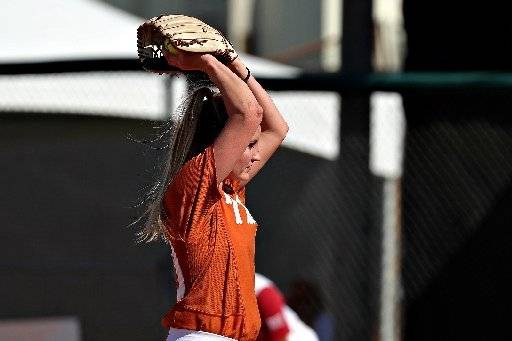 COLLEGE STATION — Sometimes sports karma is kind to those who screw up, yet keep plugging away.

The Texas softball team found itself in an uncomfortable spot Saturday night The Longhorns were hit less at the plate. And for a moment, the defense fell apart as UT floundered to keep their season alive in an NCAA tournament elimination game against Texas State.

The Bobcats (42-17) scored two unearned runs in the top of the fifth. Both were set up on two throwing errors as UT failed to successfully field a sacrifice bunt. Then Texas State padded their lead to 3-0, when Bobcats first baseman Taylor Webb blasted a home run over the left field fence to lead off the sixth.

Yet the two Longhorns (33-25) who had throwing errors on the play _ Celina Felix and Kaitlyn Washington _ came back in the critical sixth inning to knock in a total of five runs and propel their team to a 6-3 victory over Texas State.

UT will meet Texas A&M, the host team  and the tournament’s ninth seed nationally, Sunday at 1:30 p.m. at the Aggies Softball Complex. The Longhorns, the regional’s third seed, will be the home team. If Texas wins, the two teams play again for a spot to the super regionals.

If A&M is victorious in the first game, the Aggies will clinch a spot. The winner of the College Station regional likely will play at Tennessee next weekend.

Earlier Saturday, Texas run ruled Texas Southern, 8-0, clinching the victory in the fifth inning. The Longhorns were forced into the losers bracket because of a 2-1, 12-inning defeat to Texas State, Friday night.

The Bobcats lost to A&M, 3-1, in the first game of the day Saturday, which was delayed 45 minutes because of lightning.

Texas celebrated their Saturday night win in a big way because the Longhorns finally beat Texas State this season after losing three straight.

“They say the third time’s a charm, but obviously it took us four,” said Texas coach Connie Clark.  “It’s been a challenge every time we’ve played them.”

The previous three games between the two teams had been 2-1 affairs, with Texas State pitcher Randi Rupp the victor in all of them.

But Rupp didn’t play against UT Saturday night. She’d pitched 19 innings in 24 hours and Bobcats coach Ricci Woodard said she was hoping to save Rupp for Sunday’s game.

Instead, Quincy Charleston, who’d never played against UT, got the nod, finding out about 45 minutes before the game started.

Charleston befuddled Texas, luring the Longhorns into hitting numerous ground balls. Texas State gave her a 2-0 run in the top of the fifth. Catcher Haleigh Davis walked to lead off the inning. Bailee Carter bunted to move Davis into scoring position. But Felix, UT’s third baseman, threw wildly to first base. Right fielder Washington scooped up the ball and threw towards third to keep Davis from advancing. But no Longhorn was covering third.

Instead, Davis scored an unearned run and Carter was awarded third. After UT pitcher Erica Wright struck out Christina McDowell, Kimberlin Naivar singled to bring in Carter for a second unearned run.

Finally, the Longhorns figured out Charleston. She’d kept them hit less through five, with UT managing only three base runners.

Then the offense exploded.

With runners on second and third, Felix singled up the middle to bring in two runs.

With two outs and the bases loaded freshman Tuesday Dermargosian legged out an infield hit, driving in Felix to tie the game.

Then Washington smashed a double to left field for three RBI.

A heavy rain began just as the Bobcats began their final inning. Wright, who notched the win, retired Texas State in order for a drama-free close of the game.

Wright said the whole game Clark told the team to be positive and make adjustments to adapt to Charleston’s pitching.

“Hitting is contagious,” Clark said. “Soon as we started to open it up, good thinks happened.”

ON TO THE CHAMPIONSHIP GAME!! pic.twitter.com/RNBVLFUWs4