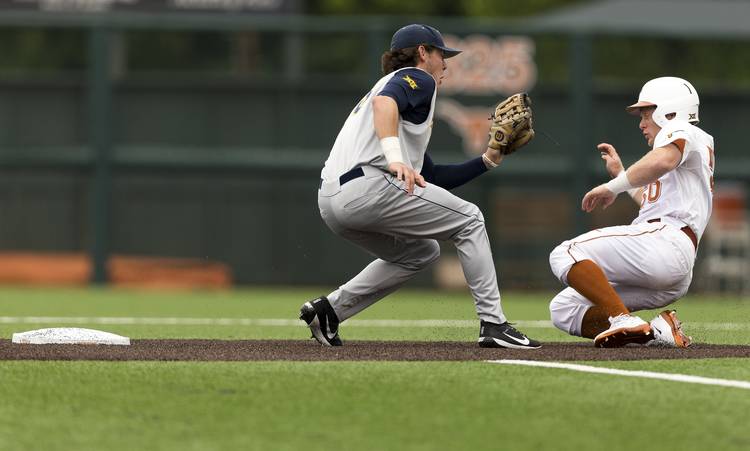 Inconsistency — and another one-run loss — dogged Texas on Saturday.

The Longhorns failed to cash in on several opportunities, and West Virginia never trailed in a 4-3 win at UFCU Disch-Falk Field. The one-run loss was Texas’ 14th such defeat this spring, and nine of them have come against Big 12 opponents.

Texas (33-20) will head into Sunday’s regular-season finale against West Virginia (32-21, 12-11) with a 10-12 record in Big 12 play. The Longhorns have secured their spot in the conference tournament, but their seeding is still in question. Texas trails sixth-place Kansas (29-26, 11-13) in the standings, but the Longhorns could leapfrog a Jayhawks team that has concluded its regular season.

“We went into the ballgame yesterday, and we played as clean as we could play,” said Texas coach David Pierce, whose team opened this three-game series with a 6-2 win Friday night. “Today in a close game, we weren’t clean, and that was the difference.”

Texas stranded nine runners with one-third of them being left aboard by Travis Jones’ fifth-inning strikeout. The Longhorns recorded seven hits, drew eight walks and reached base in all but two innings. Still, the team was held under its season-long average of 5.1 runs per game.

Trailing 4-2 in the final frame, Texas pulled within a run when David Hamilton doubled and scored on Kody Clemens’ two-out single. Tyler Rand pinch-ran for Clemens, but a diving stop by West Virginia third baseman Cole Austin robbed Jones of a potential tying double down the left field line. Austin had moved over to third base from shortstop in the eighth inning.

“We’ve got a few guys that are hot in the lineup and some guys that are cold,” Clemens said. “We just need to stay up there and have a good mind, be tough-minded at the plate and have good at-bats.”

The showdown between Saturday’s starting pitchers could have been held on a basketball court since the 6-foot-6, 260-pound Alek Manoah threw for West Virginia and Texas ace Morgan Cooper is 6-4. West Virginia led 1-0 after the second inning, although both pitchers labored at the beginning.

Cooper struck out five batters over the first two innings, but he needed 47 pitches. Manoah allowed four base runners during the same span. The Mountaineers, though, turned two double plays and caught two Longhorns on the basepaths.

Manoah was lifted in the fifth inning after he hit Zane Gurwitz with a pitch and allowed the Texas outfielder to round the bases on a balk, a wild pitch and an infield single.

Cooper went six innings, and he retired eight straight batters at one point. Braden Zarbnisky snapped that streak in the sixth inning with a two-out single, and he then broke a 1-1 tie on Chase Illig’s RBI hit. In what might be his final performance at UFCU Disch-Falk Field, Cooper struck out seven and allowed six hits.

Rounding the bases: Jackson Sigman, who graduated from Austin’s Hyde Park High, was Saturday’s winning pitcher. Sigman walked three and allowed two hits over his 1 2/3 innings of relief, but one of his two strikeouts got the Mountaineers out of a bases-loaded jam. … As he did on Tuesday and Friday, Nick Kennedy pitched for Texas on Saturday. A starter on Tuesday and a reliever this weekend, the left-handed Kennedy allowed two hits over six total innings. … Texas leadoff hitter Patrick Mathis was 1-for-2 with three walks. …. Scott Wilson, an Austin-based superfan of the University of Texas, said he attended his 1,100th straight baseball game Saturday.