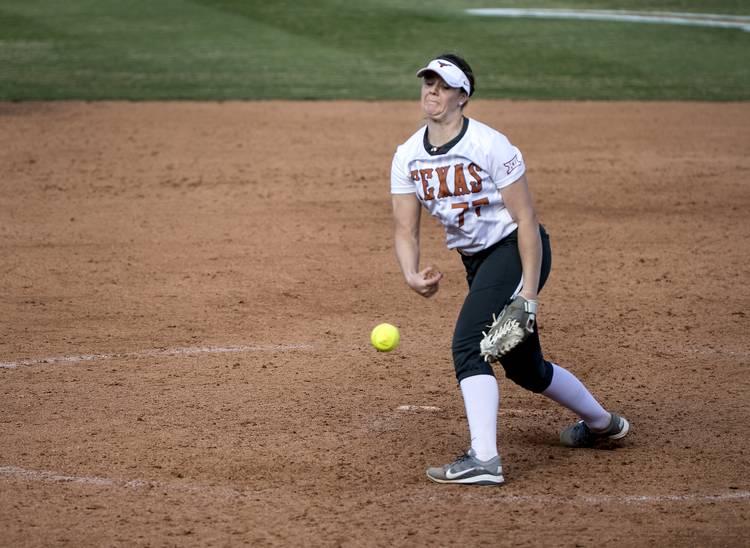 UT's Paige von Sprecken, seen in a game earlier this season, was the winning pitcher Saturday against Texas Southern, giving up only one hit and two walks. LAURA SKELDING/AMERICAN-STATESMAN

COLLEGE STATION — Offense can solve so many issues and even extend seasons.

The Texas softball team, which was on the verge of NCAA Tournament elimination, overwhelmed Texas Southern 8-0 Saturday afternoon at the College Station Regional, setting up a prime-time matchup with Texas State later in the evening. The winner survives to play Texas A&M on Sunday.

The Longhorns, the third seed at the A&M regional, pounded two Texas Southern pitchers. UT had 11 hits, with a home run and three doubles.

The game ended early, with no outs in the fifth inning. That’s when Paige von Sprecken doubled to left field and drove in Kelli Hanzel for the eighth run. In softball, if a team is ahead by at least eight runs through five, the game is called.

Saturday’s game was nothing like UT’s opener Friday at the Aggie Softball Complex. UT fell to Texas State 2-1 in a marathon, 12-inning affair.

Against Texas Southern, Longhorns center fielder Stephanie Wong’s homer pushed UT to an initial 3-0 lead in the second inning. Texas scored in every inning after that.

Earlier, Texas A&M, the top seed in the region and No. 9 nationally, used a late rally to best Texas State 3-1.

The start of the game was delayed 45 minutes because of lightning, which flashed just as the teams were posting their lineups.

The Bobcats took a 1-0 lead in the first inning via a bases-loaded walk. And the advantage stood for much of the game.

Then the Aggies, who run-ruled Texas Southern 14-0 late Friday, tied the game in the bottom of the fifth with shortstop Kristen Cuyos’ two-out single, scoring Keeli Milligan.

An inning later, Sarah Hudek led off with a double. Keeli Milligan’s double scored Hudek with what proved to be the winning run.

Texas State star Randi Rupp, the winning pitcher against the Longhorns on Friday night, was tagged with the loss. It was her 10th of the year. She allowed 11 hits and four walks and struck out five Aggies.