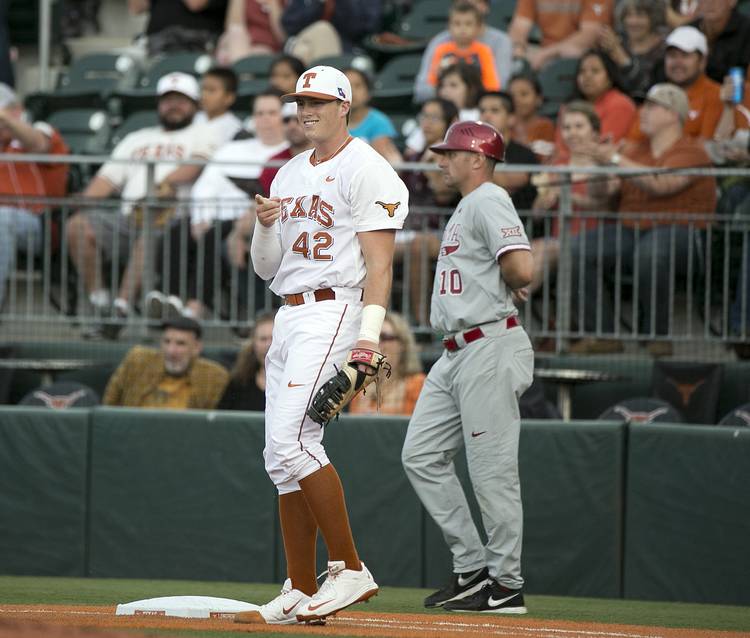 Seniors Kacy Clemens and Zane Gurwitz had memorable moments in their final game at home, and Texas took a three-game series from West Virginia with a 9-4 win Sunday. Victorious in two of this weekend’s three games, Texas shifts its attention to the Big 12 Tournament.

“This game was about gritting it out against a good team and finding a way to win this series no matter what,” Clemens said. “As far as confidence goes, we feel good, and we’re ready to rock.”

Sunday’s success came as Clemens presided over his last meeting as the mayor of UFCU Disch-Falk Field. A season-long favorite of both the local fans and media, Clemens leads the Longhorns in batting average (.308), home runs (nine), RBIs (42) and runs (42). He went 1-for-1 and drew three walks Sunday.

That one hit — Clemens’ 56th of the season — came in the first inning. West Virginia starter Kade Strowd walked two of the first three batters he faced, and Kody Clemens reached base on a bunt single. After a meeting on the mound, Clemens drove the first pitch he saw into West Virginia’s bullpen beyond the fence in left field.

Clemens was greeted first at home plate by his brother, who had been on second base. After the crowd chanted his name, Clemens emerged from the dugout for a curtain call. The Mountaineers also gave Clemens back his baseball.

“That’s basically from a movie; you can’t write it any better than that,” second baseman Bret Boswell said. “That’s awesome.”

Clemens later admitted he had gotten emotional as the Longhorns sang “The Eyes of Texas” after a pregame ceremony that honored the five recent graduates on UT’s roster. The Senior Day performance came during a season-long stretch of games in Austin in which Clemens also made a key defensive play against Texas A&M and hit a grand slam against Oklahoma.

“Special place in my heart for UT,” Clemens said. “We might not ever play here again, but it’s been fun.”

Clemens went on to score twice more as Gurwitz doubled him home during the sixth and eighth innings. Those doubles helped separate Texas from West Virginia, which drew within 4-3 in the sixth. Two of the three seniors on Texas’ roster — redshirt juniors Morgan Cooper and Boswell were also recognized during the pregame ceremony — Clemens and Gurwitz accounted for seven RBIs, five runs and three of the team’s eight hits.

After the game, Gurwitz was asked if he was ready to reflect on his time at Texas.

“I don’t want to reflect until it’s all over, because then it will get me sad again and get me emotional,” Gurwitz said. “Right now, it’s just play baseball as hard as you can and hope for the best.”

Rounding the bases: The Longhorns went 27-8 in games at UFCU Disch-Falk Field in 2017. That .771 winning percentage was Texas’ best at home since a 37-8 showing in 2010. … Kyle Johnston earned the win for Texas after allowing seven hits and three runs over five innings. The Longhorns received three innings of relief from junior Connor Mayes. … Hitless in his previous 20 at-bats, Texas freshman Ryan Reynolds entered the game in the sixth inning and twice drove in Gurwitz with a single. … West Virginia first baseman Jackson Cramer hit two solo home runs, but the Mountaineers stranded nine runners. West Virginia will battle Baylor in its Big 12 opener.