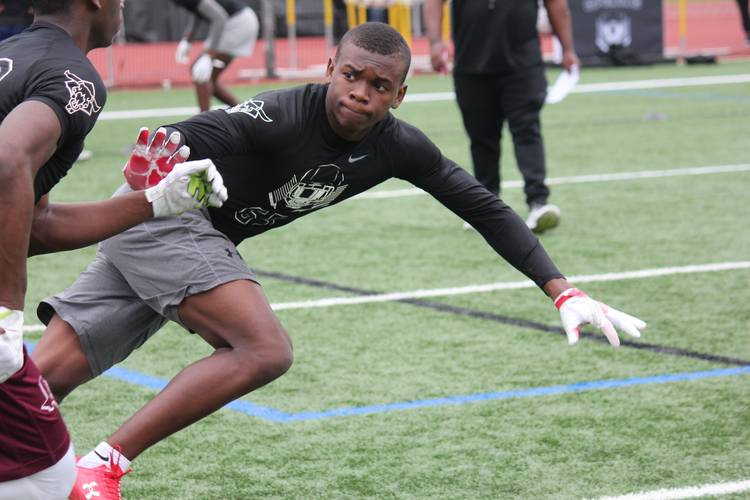 With spring evaluation period ending at the end of May, the recruiting picture around the state is starting to focus. Here are early predictions of where the state’s top 10 players from this year’s Fabulous 55 end up come national signing day. The only committed player on this list – Caden Sterns – flipped his commitment from LSU to Texas recently. The rest of the top 10 is uncommitted.

The reason: The five-star cornerback is Texas’ top priority in the 2018 class. Cook is a dynamic cornerback who is polished beyond his years. His technical ability as a prep cornerback is unmatched in the state. He also possesses a solid combination of length and athleticism. Ohio State is making a major push in Cook’s recruitment and the Buckeyes have a strong shot to land Texas’ top preps player for the second class in a row after signing linebacker Baron Browning in the 2017 class. Cook’s teammates at Houston Lamar, Al’Vonte Woodard and D’Shawn Jamison, hold Texas offers and are each high on the Longhorns. A good season by Texas and commitments from Woodard and Jamison might get Cook into the fold. If not, the state’s top player is headed to Ohio State.

The reason: Foster likely ends the 2018 cycle as the leader of the recruiting class. He’s that much of a Texas lean. Foster visited Texas multiple times in the spring and made a return visit to Texas during UIL track championships. He’s from Angleton, the home of former Longhorn greats Quandre Diggs and Quentin Jammer. Foster is Texas’ to lose and the state’s No. 2 ranked player likely ends up a Longhorn by the end of the recruiting cycle. He plays running back and safety in high school, but projects to safety in college.

The reason: Texas A&M was considered the clear leader for Wright before the Orange-White Game. Since his visit to Austin for that scrimmage, Texas has caught up to the Aggies and the two programs appear ready to battle it out for the state’s top defensive lineman. Wright is a big-bodied defensive end who can play five-technique at defensive end or move toward the center as he continues to grow into his frame. Wright’s main concern with Texas was scheme. Wright plays on an odd-man front in high school and is tasked with taking on double-teams most plays. He wants to be freed up in college and defensive coordinator Todd Orlando has done a great job convincing Wright of his role in Texas’ defense. Texas A&M is still in the game, but the Longhorns are building momentum and are heading toward an eventual commitment from Wright.

The reason: Sterns shocked the recruiting world when he flipped his commitment from LSU to Texas following an unofficial visit in early May. Sterns is considered one of the top safeties in the country, but he’ll begin his career at Texas playing the boundary corner position. At 6-foot-1, Sterns is uniquely suited to play multiple positions in the secondary. He has the coverage skills to play corner or nickel and the size and aggressiveness to eventually play free safety. His range is his best trait and he likely ends up back at safety before his college career ends.

The reason: Preston most likely ends up playing SEC football. The smart money is on Texas A&M, but LSU is making a push. There is not a more physically ready wide receiver than Preston, who bullies people at the position due to his strength. He’s a big, physical player with an edge. Preston is still raw and needs to become more consistent with his hands, but his upside is unlimited.

The reason: The Longhorns are pulling into the lead with Epps, the state’s top-ranked tight end. The long, lanky four-star prospect was committed to Alabama early in the cycle before opening his recruitment back up in February. Epps plays 7-on-7 football with Texas commit Casey Thompson and numerous other Texas targets. Texas needs tight ends and Epps is aware of the opportunity to play early and often in Austin. Michigan is still a force in his recruitment.

The reason: Oklahoma usually finds a way to poach a top prospect or two away from Texas each cycle, and Simpson is likely the best player from Texas in this cycle to head north across the Red River. He’s the only member of the top 10 to not hold a Texas offer. The four-star offensive tackle is a four-year starter and an elite basketball player for his size. He needs to develop a mean-streak before experiencing success at the college level.

The reason: Texas was in the mix with Clement but have backed off his recruitment in recent weeks. Texas wants offensive tackles and Clement is a true guard with his 6-foot-3 frame. Clement is a bowling ball of destruction in the run game. No one is stronger at the point of attack, but he does struggle when he’s given space to block a pass rusher. He’ll need to work on Pass-Pro before making a dent at the college level, but once he does, he could develop into an all-conference guard or center because of his pure strength.

The reason: Texas might miss out on Cook, but it hopes to land Green, the state’s second-best cornerback. Many college coaches and scouts feel like Green has a higher upside than Cook. Green is also 6-foot-1 and is faster than Cook. He’s not as polished at this point in his career, however. Green is a physical freak who simply needs to learn how to play the position after spending most of his time playing quarterback. He didn’t begin playing cornerback until high school, but all the tools are there for Green to make an immediate impact. Herman’s staff recruited Green at Houston and that bond should help the Longhorns when Green picks a school.

The reason: Michigan is chasing Epps, and Muhammad and right now it looks like Muhammad is the best option to leave the state for Big 10 football. Muhammad is a three-down tight end who can line up with his hand on the ground or flexed as a wide receiver. He’s bigger and more physical than Epps, but not as talented in the passing game. Muhammad is a 6-foot-4, 235-pound four-star prospect likely headed out-of-state to Michigan or Clemson.