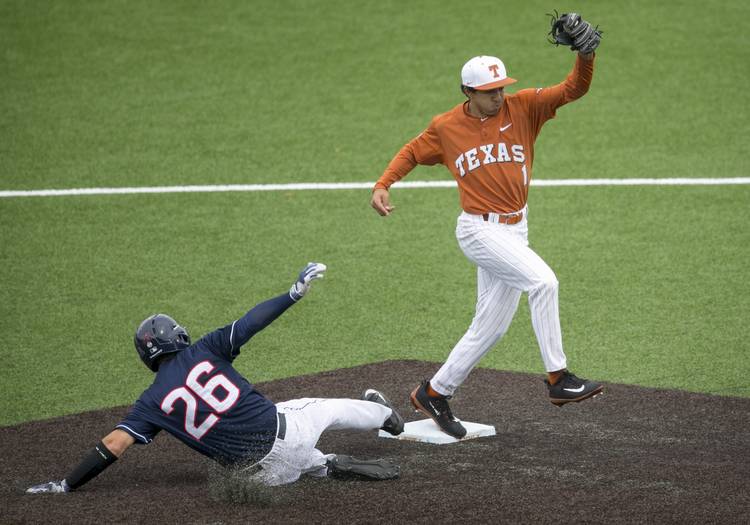 The Longhorns had wrapped up Pierce’s first regular season in Austin with a series win over the Mountaineers. Two of his three seniors — Kacy Clemens and Zane Gurwitz — combined for seven RBIs and five runs on their senior day. And that victory also boosted Texas to the sixth seed at the Big 12 tournament and a postseason opener against rival Oklahoma on Wednesday night.

Pierce, though, wanted to talk about his defense.

“The thing that was most impressive to me, all weekend, we did not make an error,” said Pierce, whose team has committed only two errors this entire month.

If Texas (34-20) is going to make any postseason noise this year, it’ll do so with its defense leading the way.

The Longhorns rank second nationally in fielding percentage; Texas and Illinois-Chicago both are fielding .984, but the Flames break the tie when you stretch that percentage out to the hundred-thousandths. Only six schools have turned more double plays than Texas’ 58.

Holding a spot among the nation’s top defenses has been a rarity recently for Texas, which ranked 207th out of 295 schools in 2016 with a .964 percentage. Texas last finished ranked in the top 20 for fielding percentage in 2011, which was a College World Series season for the Longhorns. That year, Texas ranked third with a .982 percentage.

Coached by Sean Allen, who holds the school record for having been involved in the most-ever double plays at the University of Houston, the Texas infield has been boosted by the play of two freshmen. David Hamilton has been a rangy wunderkind at shortstop and Ryan Reynolds has been steady at third base. Hamilton’s development allowed Texas to move shortstop Bret Boswell to second base. And Clemens has started at first base in 53 of the 54 games this season.

Freshman Austin Todd and sophomore Tate Shaw have found some playing time in a veteran outfield that includes Gurwitz, Travis Jones and Patrick Mathis. Splitting time behind the plate have been Michael Cantu and Michael McCann; opposing base runners are only 29 of 41 on steal attempts.

The Longhorns committed three errors against Rice back on Feb. 18, their second game of the season, but have committed more than one error in a game only six times since. Texas went without an error in 31 of its 54 games.

“I’ve been so pleased with our consistency with pitching and defense, but especially our defense,” Pierce said.

Texas is hitting .251 this season and averaging 5.2 runs per game. The defense, though, has provided many of the team’s memorable moments.

Clemens cut down the game-tying run at home in the eighth inning of a 4-3 win over Texas A&M on March 14. In left field, Shaw has made a home run-robbing catch while Jones lifted Texas to its first win of the season when he gunned down a Rice runner at home plate for the final out in a 5-4 victory. Hamilton’s top play this year may have been a spectacular stop against Baylor, and Mathis made a diving catch in foul territory last week against West Virginia.

The defense has backed a pitching staff that ranks ninth nationally with its 3.14 ERA. Morgan Cooper leads the Big 12 with 96 strikeouts, and only two pitchers have better ERAs. Nolan Kingham, who joined Cooper on the All-Big 12 team on Tuesday, and Nick Kennedy have both won a conference-best eight games. Beau Ridgeway’s 11 saves are the most for a UT pitcher since 2011.

“You look at the arms we have and you should smile because that’s what postseason baseball is about,” Clemens said. “Come crunch time, we’ve got the arms to win ball games. If we can just have some timely hitting and the arms throw like they’re supposed to, we’re going to make a run.”