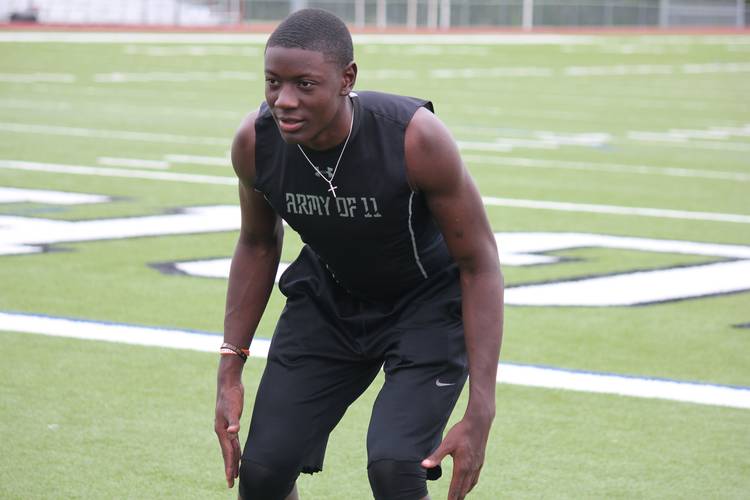 FORT WORTH — Texas defensive coordinator Todd Orlando utilizes defenders’ speed, versatility and aggression to stop offenses. He needs players with a motor and a mean streak. And athleticism doesn’t hurt, either.

He found those traits in Fort Worth Eastern Hills’ Byron Hobbs, the 6-4, 210-pound outside linebacker who committed to Texas on April 7.

“He’s always been a high-strung, active person,” said Natalia Vaughns, Hobbs’ mother. “He was always doing something. That’s why he never gets tired on the field. Byron never runs out of energy, and he never has.”

That trait will Hobbs well in college; he’s tabbed to play the Rover position once he steps on campus. In Orlando’s defense, the Rover is expected to blitz off the edge like a defensive end but also cover opponents like a strong safety. It’s a balance of traits that Hobbs feels he’s perfectly suited to exploit.

“I get to blitz, drop into coverage, play man. The Rover position is for players who can do it all; I am one of those players,” Hobbs said with quiet confidence. “It’s like another safety position, but I get to be closer to the line of scrimmage. I basically get to fly around and play football. That type of freedom was important to me.”

Freedom is an interesting word in Hobbs’ home. Sure, maybe he’s looking forward to the freedom that playing Rover allows, but it’ll be unlike the freedom he does, or doesn’t, enjoy at home. He comes from a close-knit family.

“It’s an unbreakable bond,” Byron said. “I would give my family the world.”

It’s one part laughter, one part toughness and 100 percent love. His mom is the unifying force. She’s also somewhat of a recruiting expert.

“It all happened so fast,” Vaughns said of Hobbs’ recruiting process. “Once he got his first offer from Oklahoma State, we tried to start figuring out who was really interested … look at the scheme and how’d he fit. Some schools try to only recruit the player, but I didn’t even give coaches that option. If you’re recruiting Byron, you’re recruiting the family. I’m constantly on Byron. He’ll understand why when coach Orlando is doing the same.”

She means it, too. Vaughns possesses every password to Hobbs’ social media profiles, making sure he gets back in touch with coaches and reporters who reach out for his time. And, in hindsight, family is the reason Hobbs chose Texas.

“It all makes sense looking back, but I can honestly say Texas wasn’t even on my radar,” recalled Paul Vaughns, Hobbs’ father. “I didn’t really appreciate how the school did Charlie Strong, but we went down there with an open mind and Byron fell in love with Texas on the junior day. We hadn’t taken his younger siblings on other visits, but we took his younger brother with us to Austin. They had stuff for him to do and it made it less formal. The coaches seemed to be genuine.”

Hobbs was Texas’ second commitment for its 2018 class and the first from the state of Texas, after Florida athlete Justin Watkins. Texas holds eight commitments so far, its class ranked 10th in the country right now, per 247Sports’ composite ratings.

“I didn’t want to drag out my decision for extra attention,” Hobbs said. “I knew where I wanted to go play college football, so I let everyone know. It wasn’t planned or anything like that. I just put it out there.”

The way his family enjoyed the visit to Austin made a lasting impression on him. As did how Tom Herman’s staff went about the recruiting process. His mother, who admits she doesn’t follow college football, didn’t understand the magnitude of the Texas offer. But after some research it became clear.

“I did some research and realized this was a big offer,” she said. “Then I looked at the cost to attend Texas and it took awhile to set in.”

“Texas does a good job staying in constant contact. It’s never too much or not enough,” he said. “For the most part, these are older white men trying to build a relationship with young black kids. Texas’ staff does a great job realizing what appeals to these kids and pushing that content. The locker room demolition with the hammer was a perfect example. We live in a viral world and those guys get it.”

Byron felt special at Texas for a different reason. In the era of machine-gun recruiting where colleges across the nation spray offers out to prospects, Texas is picky. Hobbs is one of only three outside linebackers with a Longhorns offer. It meant a lot to him.

“I know Texas wanted me because there weren’t many players at my position offered,” he said. “I knew I could call and commit if I was ready. I’m not sure that is true at every school. It’s also close enough to home for me to get back here and physically touch my family or for them to come visit me when they can.”

Hobbs was a first-team all-district selection as a junior after recording 86 tackles, including nine sacks. He also forced four fumbles, recovered five and made an interception. On offense, he had 312 yards and three touchdowns receiving.

“Every game he played in, he was consistently good,” said Eastern Hills head coach Tracy Simien. “He has special traits about him that a lot of kids don’t. His attitude matches his skill set, and that’s not always true in these top prospects. Once he’s bulked up with college weights and food, he can be 235 to 245 as an outside linebacker without losing his athleticism.

“He does well in space, in coverage and he has length that can be taught. He can develop into a good pass rusher. He’s versatile.”