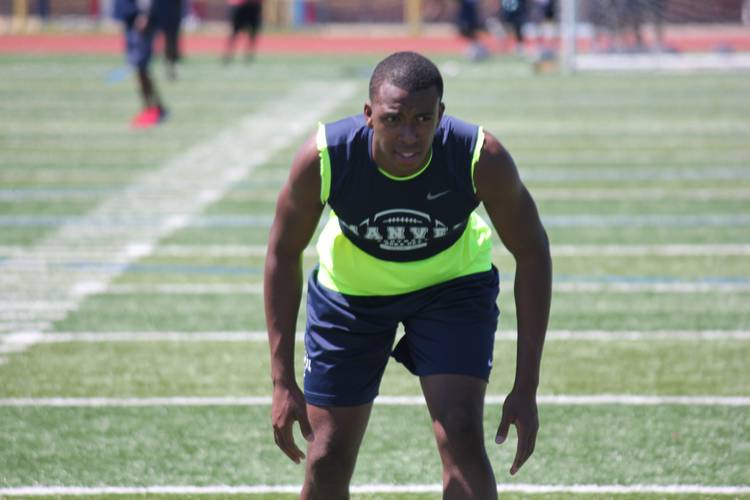 MANVEL — Consider Trent Gordon a late bloomer. Most of the elite athletes in the state point toward elementary school and Pop Warner football as the time they realized sports was a route toward success. Not Gordon. The No. 51-ranked player on the Fabulous 55 fully admits it took him longer to find his footing.

“The end of my freshman season is when football really became a priority and a passion,” said Gordon, a three-star safety. “It was something to do before then, but I can’t say I took it all that serious as a kid. I started to realize I was good at football and my love for the game grew. Basketball was my first love, but I wasn’t any good at that. Track and football became my focus.”

Gordon began his high school career at Conroe Oak Ridge before moving to Manvel as a sophomore. His first season at Manvel was his junior year and he made an immediate impact on a state-ranked Class 5A program known for producing college talent.

“My job is to win football games and get kids free school,” said Manvel head coach Kirk Martin. “Trent is a highly intelligent football player and person, so it was easier for him. His mom is a chemical engineer and he’s not a partier. Trent is about football and academics. Add in his athletic gifts and we knew plenty of schools would come after him.”

Gordon holds 31 offers. He was a second-team all-district player as a junior, finishing his first season at Manvel with 81 tackles, 10 pass breakups, a forced fumble and sack, two fumbles recovered and two interceptions. The 5-11, 172-pound Gordon is the No. 37-ranked cornerback in the country, per 247Sports’ composite ratings.

His recruitment took a turn on March 15 when he and his family took a trip north. The first stop of the day was Penn State, and it ended up being the last stop. Two weeks later, he committed to the Nittany Lions.

“We got to Penn State and they rolled the red carpet out for me,” he said. “All of the coaches were waiting in the lobby and I ended up being there for over 12 hours. I was supposed to leave to visit another school, but I never made it.”

Gordon said feeling valued, academics, football and the overall feel of the college were determining factors for him in recruiting. He felt valued at Penn State, but that’s not all he felt.

“It was terrible,” Gordon said of the snow there. “I didn’t expect it to be that cold or to see all that snow. I know I should’ve known, but I underestimated it. I figured a jacket would be enough. I had on my regular shoes from Texas and all that. It was horrible.”

Gordon could play cornerback or safety in college. He takes pride in that versatility. But recruiting can be fickle. And he openly admits that his future position isn’t the only thing that’s still up in the air, even if a verbal, non-binding pledge was made.

“My recruitment is not shut down. It is completely open,” Gordon said. “I’m going to consider what is said and what is offered, but I am 100-percent committed to Penn State and think that’s where I’ll end up. It’d be dumb not to listen, though.”