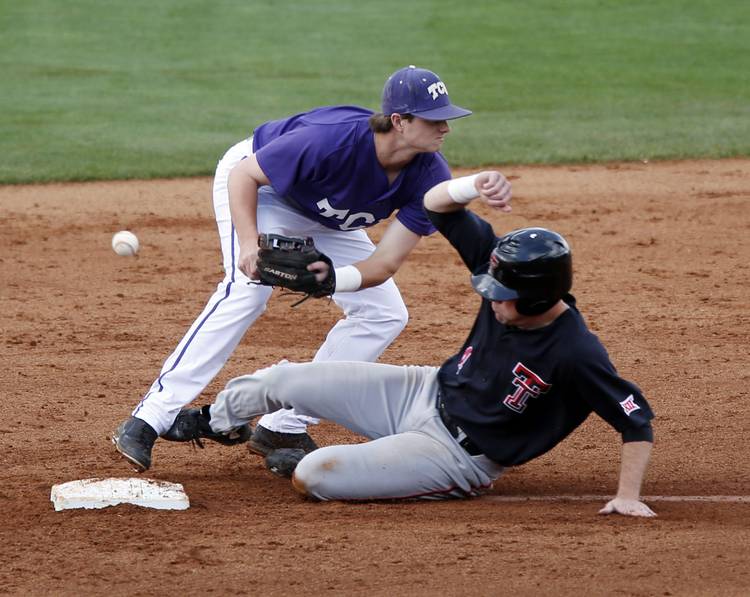 OKLAHOMA CITY — For at least one day, the balance of power shifted in the Big 12.

Thanks to a four-run eighth inning, Kansas earned a 7-3 win over TCU in its opener at the Big 12 tournament Wednesday. TCU’s loss at Chickasaw Bricktown Ballpark came in the game that followed Oklahoma State’s 3-0 conquest of Texas Tech. TCU and Texas Tech shared the Big 12’s regular-season title.

Kansas (30-26) advances to play the winner of Wednesday night’s game between Texas and Oklahoma. TCU (39-15) gets the loser Thursday.

Humphreys scored the game-tying run in the bottom of the seventh, but Kansas quickly responded.  The first four Kansas batters in the eighth inning reached base, and the Jayhawks plated four runs on two run-scoring singles and a sacrifice fly. That scoring spurt was more than enough.

Neither starting pitcher factored in the win. TCU freshman Nick Lodolo overcame a rocky start in his seven-inning performance. Kansas junior Taylor Turski, who retired the first five batters he faced and later strung together nine straight outs,  struck out eight over 6.1 innings.

Still safe: In some cases, officials at the Big 12 tournament will have access to instant replay. Oklahoma State and Texas Tech tested out that replay equipment during the Cowboys’ 3-0 win on Wednesday.

Fantastic play by @colinsimpson30 to put @OSUBaseball in the lead. Now up 3-0 in the 4th. pic.twitter.com/Nv2K0JYHTt

Oklahoma State appeared to break a scoreless tie in the second inning when Colin Simpson beat a throw home on a sacrifice flyout to centerfield. Umpire Doug Williams’ ruling was then upheld after a lengthy delay.

Instant replay can be used for a series of situations that includes plays at home, catches in the outfield and spectator interference. Challenges are left to the crew chief. Coaches can appeal for a replay, but there will be no official challenges from the dugout.

Let’s get it started: Texas was set to start Nick Kennedy on the mound on Wednesday night for its tournament opener against Oklahoma. All-conference pitchers Nolan Kingham and Morgan Cooper anchor Texas’ rotation, but those pitchers also threw this past Friday and Saturday against West Virginia.

Kennedy (8-1; 2.36 ERA) has started in six of Texas’ mid-week games, and the left-handed sophomore has also been used as a weekend reliever. Last week, Kennedy was Texas’ starter and winning pitcher on Tuesday against Incarnate Word. He then threw 18 pitches over two one-inning appearances against West Virginia.

Of note: The Tuscaloosa News reported on Wednesday that Alabama had decided to relieve first-year baseball coach Greg Goff of his duties after the first-year coach attempted to “reduce or revoke scholarships for up to 10 players.” This past June, Goff was hired over a field of finalists that reportedly included Tulane’s David Pierce. Later that month, Texas hired Pierce to lead its baseball program.