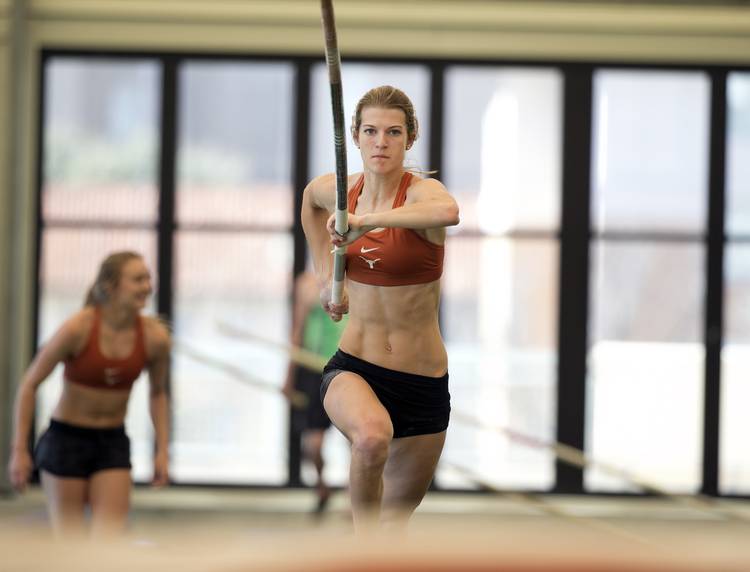 For Kally Long, that has proven to be good and bad. The junior pole vaulter for Texas has endured the bad. Now she’s enjoying the good, and she hopes the best is yet to come.

Long was one of three Longhorns on Thursday to advance to the NCAA track and field outdoor championships next month, joining long jumper O’Brien Wasome and javelin thrower Haley Crouser.

Missing only one attempt at the NCAA West Regionals at Myers Stadium, she was one of 10 vaulters to clear a meet-record height of 14 feet, 1 1/4 inches, punching her ticket to the nationals in Eugene, Ore. on June 8-11 as a top-12 regional finisher.

“This has been a wild ride,” said Long, who was a two-time state champion at Wimberley High School. “I definitely didn’t see any of this happening at the beginning of the year.”

There’s a good reason for that. At an indoor meet in Seattle on Feb. 10, Long suffered the first significant injury of her career.

It was a doozy. On her first attempt of the competition, she missed the pit on the way down and fell about 15 feet before landing on her back.

It certainly hasn’t ended Long’s. Nor did it end her father’s, who went through a similar experience as a high school vaulter in Karnes City.

Mitch Long also missed the pit while training by himself in high school. Kally said her dad spent several days in the hospital following his mishap. But he recovered and went on to also vault for the Longhorns from 1982-86.

“Maybe it runs in the family,” Kally mused.

All things considered, her injuries — a punctured lung and a concussion — could have been considerably worse. And she rebounded faster and better than anyone might have expected, even with a subsequent rib injury during her rehab.

“That was just a nightmare,” she said. “I walked around lopsided for two days, holding my side. I couldn’t stand up, couldn’t breathe.”

But Long not only has persevered, she’s thrived. About a month-and-a-half after her injury, she was back and setting a personal outdoor best with a clearance of 14-5 at the Texas Relays. That ranks her as the No. 2 female vaulter in school history.

“I’m amazed I didn’t break anything,” she said of her mishap in Seattle. “It just blows my mind. I had God on my side that day, for sure. There’s no way I could walk away from that without breaking something.”

What didn’t amaze her was when she rallied to get back on the runway as quickly as possible.

“I definitely think I’m a tough person,” Long said. “I have a very high level of pain tolerance. I think I handled it really well.”

So does her coach.

“I’m very proud of the way she’s been able to compartmentalize that accident,” Sevin said. “It hasn’t been easy every day, but at the end of the day, in competition, she shows up and she’s competitive.”

Wasome, a freshman, placed ninth in the long jump with a leap of 25 feet, 5 1/4 after entering the competition ranked 16th in the West Region. Crouser, a junior, finished sixth in the javelin with a throw of 161-1.

Crouser is the cousin of Ryan Crouser, a four-time NCAA champion at Texas who set an Olympic record at the 2016 Games in Rio de Janeiro. Coincidentally, he also is Long’s boyfriend.