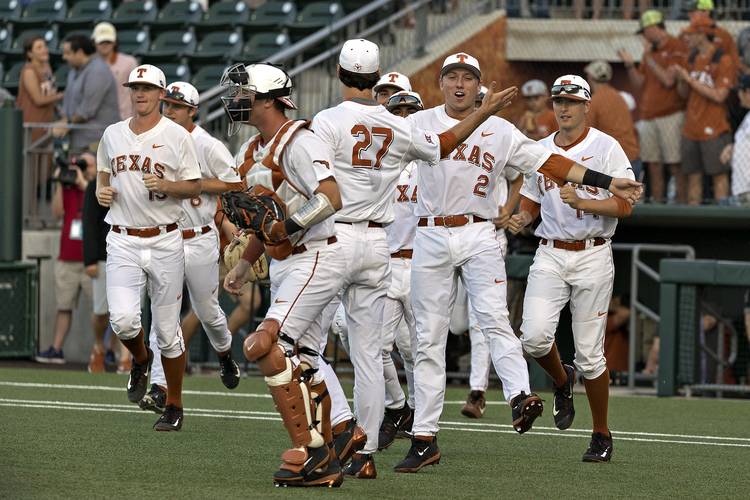 OKLAHOMA CITY — The stakes were raised, but Texas still came out on top in the Red River Rivalry.

Kacy Clemens homered twice and Texas turned to its bullpen in Wednesday’s 8-4 win over Oklahoma at Chickasaw Bricktown Ballpark, the final game of the first day of the Big 12 baseball tournament. The Longhorns, seeded sixth here, beat OU for the third time this season and now advance to play Kansas (30-26) Thursday night.

Earlier this year, Texas went 2-1 against Oklahoma in a three-game series that it hosted in Austin.

With his 10th blast of the year, @KClemens21 🤓 put the Horns ahead. 🤘 pic.twitter.com/ngktGBaGUZ

Clemens gave Texas (35-20) an early lead when he hit a two-run home run with two outs in the first inning.  Batting left-handed, he hit the baseball into the left-field bullpen for the second time in as many games. On Sunday, he hit a grand slam at UFCU Disch-Falk Field in a 9-4 win over West Virginia.

The two-run blast gave Clemens his team-leading 10th home run, a powerful statistic balanced by his 10 steals. With that swing, he also became the first Longhorn with double-digit homers and steals in a single season since Kevin Keyes in 2010.

Texas’ first baseman wasn’t done. In the third, he hit another two-run homer. That shot to left field lifted Texas to a 5-0 lead.

“Every hitter tries to spray the ball around the field,” said Clemens, who later doubled. “Luckily, I got some pitches tonight in and out, and I was able to handle them.”

With a 3.14 ERA that ranks ninth nationally, a five-run lead should have seemed safe for Texas. Oklahoma, however, made the Longhorns sweat a little.

Held hitless over the first three innings, OU finally scored in the fourth before chasing Texas starter Nick Kennedy during a two-run fifth. David Hamilton pushed Texas’ lead back to 6-3 with an RBI double in the sixth. Oklahoma’s Renae Martinez canceled out that score with a seventh-inning solo shot.

“We don’t really press the panic button in those situations, but it’s not ideal,” said Martinez, a senior. “We’re a good bounce-back team.”

After 2.2 innings of relief from Shugart, Texas coach David Pierce called on Morgan Cooper in the eighth. An all-conference ace who made the 13th start of his season last Saturday, Cooper struck out two batters in an inning of work. After Texas tacked on two insurance runs in the ninth, Beau Ridgeway closed out the win.

“Bullpen was great,” Shugart said. “Pounding the strike zone’s really what was working. … The defense was great today, and it panned out for us.”

Rounding the bases: OU recorded its last out well after midnight; on Thursday the Sooners (34-21) will play TCU (39-15) in an elimination game at 12:30 p.m.. TCU and Oklahoma were seeded second and third in the tournament’s bracket. … Having logged six innings last week against Incarnate Word and West Virginia, Kennedy was pitching for the fourth time in eight days. He struck out eight over 4.1 innings. … Hamilton doubled three times against the Sooners. … Oklahoma head coach Pete Hughes was ejected in the ninth inning for arguing a walk drawn by Ryan Reynolds.