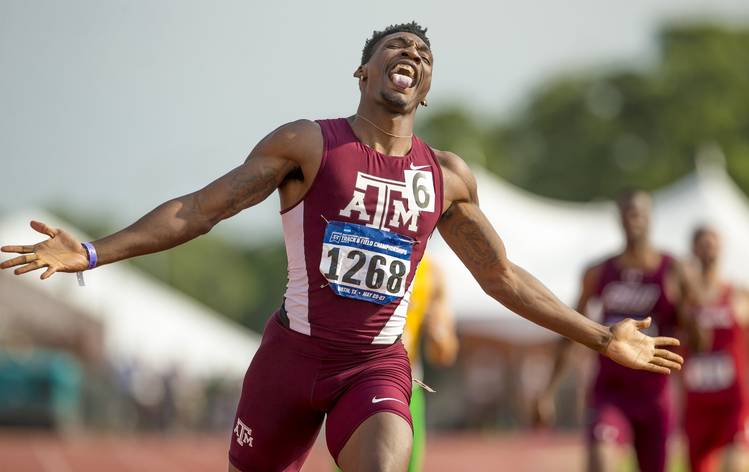 Fred Kerley of Texas A&M celebrates after beating the collegiate record in the 400 Meter Dash at the NCAA Track and Field Championships West Preliminary at Mike A. Myers Stadium on Friday May 26, 2017. JAY JANNER / AMERICAN-STATESMAN

When Spencer Dunkerley-Offor glanced at the Myers Stadium scoreboard after his 110-meter hurdles race Friday at the NCAA West regional track and field championships, he saw a time of 12.6 seconds by his name. That would have been in world-record territory.

“I thought to myself, ‘That’s cool, but that’s definitely not real,’” said the Longhorns junior, whose adjusted time of 13.64 still was the third-fastest prelim time to advance him to Saturday’s quarterfinals.

Many onlookers probably felt the same way a little later when they saw a time of 43.70 by Texas A&M quarter-miler Fred Kerley.

That one was real, however. Amazing, but real.

The Aggies senior from Taylor jolted the track and field world Friday with his clocking in the 400-meter quarterfinals. He did more than earn a ticket to the NCAA championships in June. He also ran the seventh-fastest time in world history and shattered the collegiate record of 44.00 established by USC’s Quincy Watts at the 1992 NCAA championships in Austin.

Kerley obliterated the three-heat field, where the top 12 overall finishers qualified for nationals. The second-fastest time, by Baylor’s Wil London, was a sizzling 45.02. But 43.70 blew it away.

Kerley’s performance overshadowed everything. There were other notable showings, however, and the Longhorns’ high hurdling crew supplied some of them.

Three of four Texas women qualified for Saturday’s quarterfinals, where the 12 fastest finishers will advance to Eugene, Ore. Two of three UT men advanced to the quarters, and the third — Wolf Mahler — also is guaranteed a place at nationals in the decathlon.

Longhorns freshman Rushelle Burton, the nation’s top-ranked collegian, paced the Texas women with a 12.80 clocking, third-fastest of the prelims. Ariel Jones had the fifth-fastest time of 13.02, while Ashley Miller advanced with a 13.27.

“They say we’re one of the best groups in the nation, and I believe it,” Jones said. “I believe in the girls on this team.”

Burton led the UT contingent despite drawing the far outside lane 9 in the random draw. For Saturday’s quarterfinals, the lanes will be seeded by prelim times.

“I’m not pleased,” Burton said of her race. “I guess I’ve got to get used to all lanes because I’m usually not outside. I’m a bit disappointed in that, but I just wanted to advance to the next round.”

In the men’s 110-meter hurdles, Dunkerley-Offor got off to a good start en route to winning his heat. He credited it in part to fellow hurdler John Burt, a quick starter who rejoined the track team recently following his spring practice duties as a wide receiver on the football team.

Burt also advanced to the quarters with a time of 13.86.

“I didn’t feel that aggressive, but I didn’t have to be that aggressive today,” said Dunkerley-Offor, a product of St. Stephen’s in Austin who redshirted last year with a knee injury. “My head’s in the right place. I’m ready to run.”

In an early event Friday, Texas sophomore Barrett Poth became the second Longhorns man to secure a spot at nationals, with a clearance of 17 feet, 6 ½ inches in the pole vault.

Poth, a Klein Oak product, didn’t miss an attempt after entering the competition with the bar at 16-10 ¾. He cleared that height and 17-2 ¾ before also going over at 17-6 ½ on his first try.

Class of 2017: Samuel Cosmi’s journey from Houston to Texas fulfills a dream