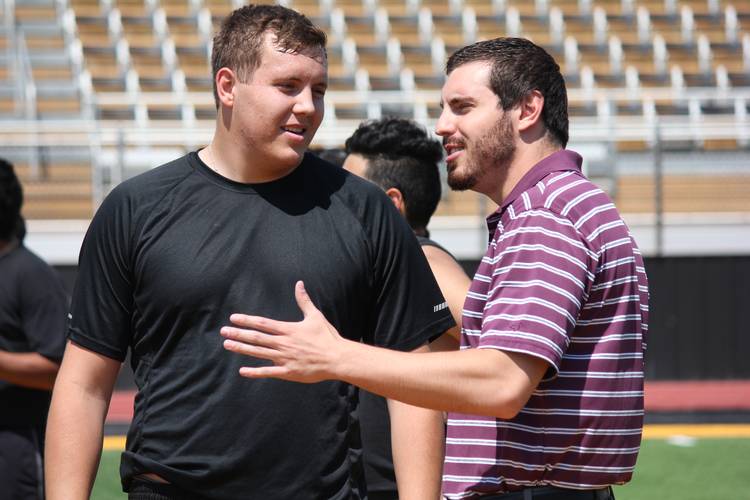 SEMINOLE — Reese Moore extends from the West Texas soil like the oil rigs that litter Seminole and its surrounding areas. Oil, football and family swirl together in the wind to create a unique upbringing for Moore and his teammates. The closest movie theater is in New Mexico. It’s routine to drive an hour up to Lubbock for a bite to eat.

“We just got a Taco Bell, and that was a big deal,” Moore said. There are four stoplights in town, and it’s common to see a tractor driving down the street.

“I’ll miss how simple life is here, but I’m ready for a new experience,” he said. “I’ve never seen anything else.”

Moore was born and raised in Seminole, a town of roughly 7,000 people located about an hour north of Midland. Moore, a 6-6, 265-pound tight end who committed to Texas on April 23. He’s a three-star prospect — as an offensive tackle, not a tight end. He’s the 30th-ranked tackle in the country per 247Sports’ composite ratings. He’s also a basketball star for a team that lost in the regional finals on a buzzer-beater.

“Growing up here, it is hard work. What you get is what you put in,” Moore said. “I’ve been fortunate to have great parents who taught me to do things to the best of your ability and don’t quit. I’ve driven tractors for one of my friends who is a farmer. I do yard work in the summer. It does get tough at 15 when you’re pushing a mower at 105 degrees and finish because you said you would.”

That work ethic was instilled at an early age. Moore was a self-described hothead as a child with a bad temper. Normal punishment wouldn’t work on Moore, who was a big child with a big personality.

So, his dad, Todd, used his fatherly instinct to derive a new plan.

“Reese was sent to the principal’s office for something in the first grade. The punishments we used for his older brother, Tanner, didn’t work, so I had to get creative,” Todd Moore said. “There was a tree stump in our front yard and every day before and after school he would go out there and work on digging it out until it was done.”

Reese still contends that first-grade office visit was a misunderstanding.

He’s the younger brother, a rebel by nature and nurture. Tanner, his older brother, is mild-mannered. The two are best friends, siblings and Tanner is Reese’s head coach in basketball and assistant coach in football. They’re six years apart.

“Tanner is my biggest influence today,” Moore said. “As a teenager I get frustrated with some of the things my parents say. He helps calm me down and play middle-man. He played Division II football. He’s been through the process. He helps me as much as he can. I respect him a lot and I’m glad he’s my brother. I value his word the most.”

Their relationship allowed Tanner Moore a window into his brother’s recruitment that no one else could see. Reese was considering Oklahoma and TCU the hardest before he made a March trip to watch Texas practice. A return trip was made for the Orange-White Game, so Tanner tagged along.

“I could have told you when we left that Reese was committing to Texas,” Tanner Moore said. “I know Reese better than anyone, and I knew what coach (Tom) Herman and coach (Derek) Warehime were selling to the players would resonate with Reese. Reese hates to lose and Herman is building a program of high expectations. He wants to restore Texas to where it should be and being a proud Texan and upholding the state’s university mattered to Reese.”

Tanner Moore may have known that Reese was picking the Longhorns before their parents did, but it was their mom, Kathy, who should be credited for Reese even considering Texas in the first place.

Moore wasn’t pursued hard by the previous Texas staff. He visited Austin for a camp and again to watch the Longhorns face Baylor last fall. He walked away unimpressed and told his mom, “If I never go to Austin again, I’m OK with that.”

But after Moore’s junior season Kathy came home and noticed him on the phone. She figured it was Virginia, since the Cavaliers were expected to offer him that day. Instead, it was coach Warehime. Not only did Texas’ new offensive line coach want to get to know Reese, he wanted to get to know the family. That resonated with the Moores.

“By the time I hung up the phone, I knew almost everything about coach Warehime. It was great. Nobody had taken the time to do that before,” Kathy Moore said. “I know one of the tricks in recruiting is to get the mom on your side, and Texas did that well.”

Indeed, Warehime did win her over and that led to Moore’s unofficial visit to Austin in March. He said he was hesitant about making the six-hour drive, but that his mother — as moms tend to do — won out and convinced him to give Texas’ new staff a clean slate. It worked.

“I think a lot about where I would be if she didn’t talk me into visiting Texas earlier in the year,” Moore admits. “It is crazy how one decision can change the course of a life.”

The decision to pick Texas became easier once California quarterback Cameron Rising flipped from Oklahoma to Texas. The two grew close at Texas’ and Oklahoma’s spring games. Rising had hinted at his eventual flip to Moore and even called the tackle before committing to Texas on April 22. Moore committed the next day.

“When we left the Texas spring game, I looked at my parents and told them that Cameron was a guy I could block for over the next four to five years,” Moore said. “He’s a great guy and a great player.”

Moore will make a position change in college. It’s nothing new for a small-town kid.

“In a small town, no one plays one position. We go play whatever position is needed,” he said. “I’ve played everything from wide receiver to center at Seminole. I’ve taken a snap and run it up the middle. I don’t care what position I play. I knew offensive tackle was likely the position for me in the future, so I’m ready to do whatever is best for the team.”

Class of 2017: Samuel Cosmi’s journey from Houston to Texas fulfills a dream