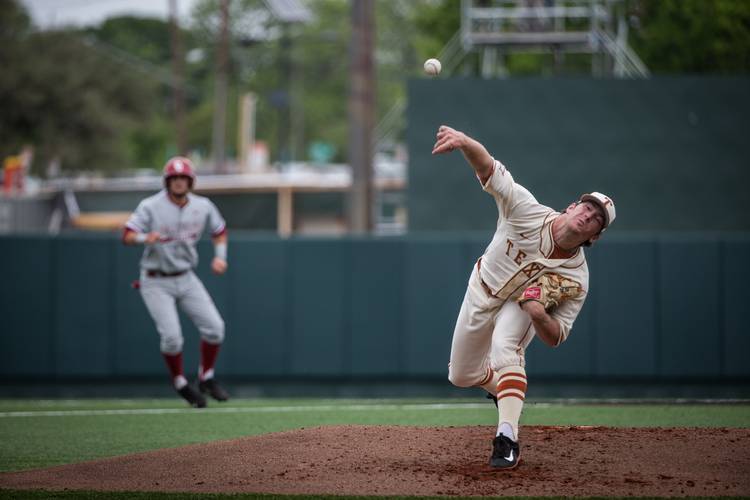 OKLAHOMA CITY — For the fourth time this season, TCU dealt defeat to Texas.

A fifth loss to the Horned Frogs would end UT’s stay at the Big 12 baseball tournament.

TCU pitcher Mitchell Traver handcuffed Texas as the Longhorns slumped to a 9-2 loss Saturday afternoon at the Chickasaw Bricktown Ballpark. The game evened the Horned Frogs with the Longhorns in the loss column at the double-elimination tournament. An elimination game between Texas (36-21) and TCU (42-15) was set for Saturday evening.

For the fourth time in a seven-game span, Texas got on the scoreboard in the first inning. Junior Patrick Mathis, who didn’t become an option atop the Longhorns batting order until mid-April, homered to lead off the game. It was the 12th home run of Mathis’ career but his first at the start of a game.

Because of an uncharacteristic mistake, that 1-0 advantage was short-lived.

Leading off the bottom of the first, Austen Wade smoked a sharp grounder that Texas second baseman Bret Boswell couldn’t handle. The error was Texas’ first since a two-miscue showing against TCU on May 6. Texas, which hadn’t committed an error in its last seven games, was ranked second among 295 NCAA Division I teams in fielding percentage (.985).

Boswell’s error snowballed into a four-run inning for the Horned Frogs. TCU had a triple, a double and a single in the inning, but all four runs were unearned.

TCU then quickly pulled away from the Longhorns.

The Horned Frogs scored again in the second and fourth innings, and they added an insurance run when Evan Williams scored on a wild pitch in the sixth. Wade then tripled home a run in the eighth and scored on the same play on an error that was charged to Mathis in right field.

Taking the loss Saturday was Texas junior Kyle Johnston, the rotation’s bright spot during TCU’s sweep of the Longhorns in early May. In a 4-3 extra-inning loss to TCU on May 7, Johnston allowed two hits and two runs over 6 1/3 innings. Three weeks later, Johnston was responsible in a three-inning start for six of TCU’s 14 hits and six runs.

Opposing Johnston was Traver, a senior who was also the Texas right-hander’s counterpart earlier this month. Traver was sporting a 5.13 ERA, but Texas tagged him for only four hits. Traver struck out eight and exited after the seventh inning with a 7-1 lead.

Rounding the bases: Oklahoma State advanced to the Big 12 Tournament championship game with a 4-3 win over West Virginia. The Cowboys, who blew a ninth-inning lead Saturday before besting the Mountaineers in the 10th, are 3-0 this week despite being the tournament’s eighth seed. … TCU coach Jim Schlossnagle coached in his 1,000th game Saturday afternoon. Schlossnagle is 607-269 in 14 seasons at TCU, and he coached 124 games at UNLV. … In the ninth inning, Texas sophomore Tate Shaw contributed a pinch-hit double before scoring on Austin Todd’s single. … Freshman RHP Blair Henley (3-4, 4.70 ERA) was the announced starter for Texas in the elimination game Saturday evening.