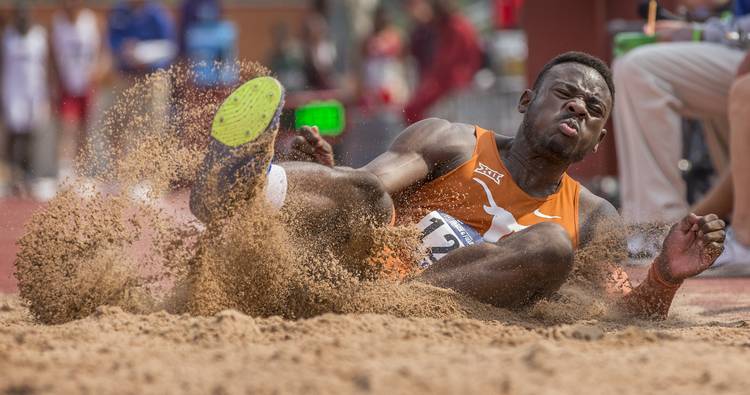 O’Brien Wasome of UT competes in the triple jump at the NCAA West Regional at Myers Stadium. JAY JANNER / AMERICAN-STATESMAN

O’Brien Wasome didn’t have one of his better days on Saturday. But that didn’t prevent his fellow Longhorn sprinters from having one of theirs.

Wasome, who recently had been handling the leadoff leg on Texas’ 400-meter relay in addition to his long jump and triple jump duties, didn’t come out of the blocks at the NCAA West Regional track championships at Myers Stadium. He was held out after he said he felt a recurrence of back pain that has been aggravating him.

The freshman from Jamaica said his back was one reason he surprisingly failed to qualify for the NCAA national championships in the triple jump — his specialty. But his teammates on the relay didn’t miss a beat.

With Carlton Anumnu leading off, Texas won its heat to move on to the June 8-11 nationals in Eugene, Ore. Anumnu, Aldrich Bailey Jr., Charles Anumnu (Carlton’s twin brother) and Senoj-Jay Givans completed the lap in a season-best 39.10 seconds, the fourth-fastest time in the quarterfinals.

The Longhorns consider strength in numbers to be a critical component of their success in the relay.

“It’s very competitive. Everyone’s always fighting to be on the 4×1,” said Charles Anumnu. “It’s not set in stone who it’s going to be.

“We’ve got six or seven people who all want to be on it. That’s what I like about the culture here at UT. It’s competitive. You’ve got to fight. I like that attitude. If you can be competitive with people you know, there’s no problem doing it against people you don’t know.”

The women’s relay was notable mostly for the disqualification of Oregon, which shared the collegiate record with LSU, for passing out of the second exchange zone.

Wasome, who qualified for nationals in the long jump Thursday, never got untracked in the triple. He fouled on his first two attempts when he ran through the pit because his steps were off.

“My back’s been bugging me,” he said. “It’s been an issue, and it gave me a little trouble on my approach today.”

On his third and final attempt, he recorded his sole legal jump. But his leap of 51 feet, 3½ inches was good for only 16th place, out of the running for a berth in the event at nationals.

It was a bit of a topsy-turvy meet for Wasome.

He entered the meet ranked eighth nationally and fifth in the West in the triple jump with a best of 53-6¼. He was considered a long shot to qualify for nationals in the long jump — he came in ranked 30th nationally and 16th in the West — but that’s the jumping event he’ll do in Eugene after a qualifying mark of 25-5¼ on Thursday.

For the Longhorns, there were more bonuses than unhappy news on their home track in the final steppingstone to the nationals.

The high hurdles were a prime example, where UT advanced three women and two men to Eugene.

The men’s hurdles were a surprise. John Burt, a wide receiver on the football team who recently rejoined the track team after spring football ended, ran the best race of his career to win his heat in 13.75 seconds. Texas’ Spencer Dunkerley-Offor was second to Burt in 13.84.

For Texas, the meet also exuded a what-might-have-been vibe as three Longhorns finished in the dreaded 13th place — one spot out of qualifying for nationals.

On Friday, John Rice’s 8:57.29 clocking in the steeplechase was less than a second slower than the 12th-place finish of Illinois’ Dylan Lafond. Also, Mariam Abdul-Rashid missed tying Missouri’s Valerie Thames for 12th in the 400 hurdles by .03 of a second, with a time of 59.12.

Saturday, Brian Peterson joined the club. In the discus, he got off a best throw of 180-1 on his third and final attempt. But that was 18 inches shy of 12th place, held by DePaul’s Trevor Kintyhtt.

Texas qualifiers for the June 8-11 NCAA Championships in Eugene, Ore.