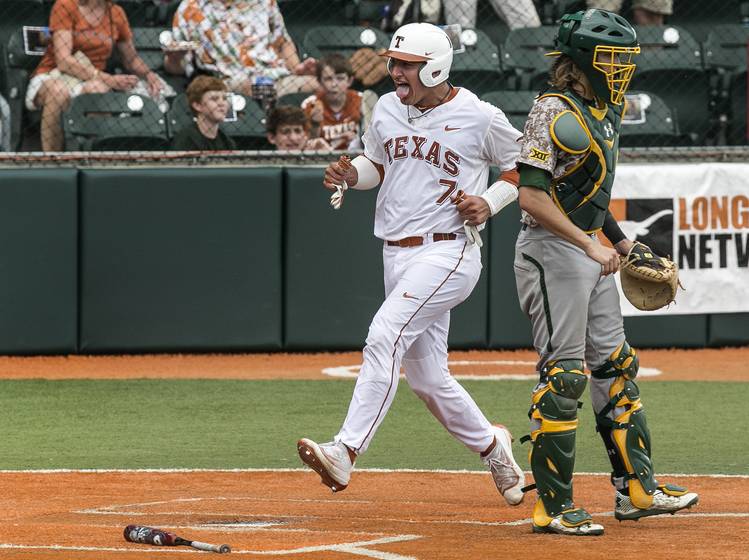 OKLAHOMA CITY – For the record, Texas is 1-4 against TCU this season.

The Longhorns, though, earned the win that matters the most.

Michael Cantu homered and Blair Henley gave Texas six strong innings on the mound as the Longhorns beat TCU 9-3 in an elimination game at the Big 12 tournament on Saturday. Texas had lost its first four games against TCU this year — with one of those losses being a 9-2 defeat earlier in the day — but Saturday’s success advanced the Longhorns into the Big 12’s championship game.

“They’re a good team, and we hadn’t played our best game,” Henley said. “We knew that we had to come back. This was a big game (that would impact) our future. We had to come out and do our job and win the game.”

Added Texas coach David Pierce: “It was a good game to bust a goose egg.”

Given an hour to recoup from that seven-run loss to TCU, a rejuvenated Texas team jumped all over Horned Frog starter Haylen Green at Chickasaw Bricktown Ballpark. David Hamilton crossed home plate first on a first-inning sacrifice fly, and fellow freshmen Austin Todd and Ryan Reynolds quickly extended that lead to 3-0 with RBI singles.

Texas, however, did not stay on its 27-run pace.

After leaving 24 runners on base in tournament wins over Oklahoma and Kansas, Texas stranded Longhorns on third base in each of the next three innings. UT had a runner thrown out at the plate in the third inning, and the bases were left loaded in the fourth.

While Texas was squandering opportunities, TCU pulled within 3-2.

UT found itself in another two-out predicament in the fifth inning, but Cantu pulled Texas out of its rut. With runners on first and second base, Cantu crushed an offering from TCU reliever Charles King over the left field fence.

“I didn’t know if the wind was going to knock it down,” Cantu said. “I knew I hit it pretty well. I was praying it went out, and thank God it went out.”

The hit was the second of the tournament for Cantu, who sat out the postseason’s first 23 innings. Cantu was hitting just .192 this year with five of his 19 hits being homers. On Saturday night, he went 3-for-5 and scored twice.

Cantu and Texas’ 13-hit offense supported Henley, the team’s one-time Sunday starter who was making his first start since April 25. A freshman who has both struggled and shined this season, Henley lowered his ERA from 4.70 to 4.22 by surrendering four hits and two unearned runs.

Henley threw 101 pitches over six innings. His three walks were cancelled out by three strikeouts.

“He’s got great stuff, but as a freshman, sometimes you lose your confidence and I think he just started gaining his confidence back,” Pierce said. “He showed that today.”

Texas was expected to give the baseball to Morgan Cooper on Saturday, but Pierce said the all-conference honoree was feeling “tender” and needed an extra day of rest.  Following last Saturday’s 106-pitch start against West Virginia, Cooper pitched an inning of relief in an 8-4 win over Oklahoma on Wednesday.  Pierce expects Cooper to be available on Sunday.

Rounding the bases: Travis Jones was hit by a pitch for the 21st time in his career on Saturday. That tied him with Ryan Brooks for 10th in the Texas history books, but the junior outfielder probably won’t overtake Jeff Ontiveros’s school-record 74 plunkings. … Texas junior Patrick Mathis hit his second home run is as many games in the ninth inning. … Three errors by Hamilton, the freshman shortstop who committed eight errors over his first 56 games, led to TCU’s three unearned runs. … Texas beat Oklahoma State for the Big 12 tournament’s championship in 2015.