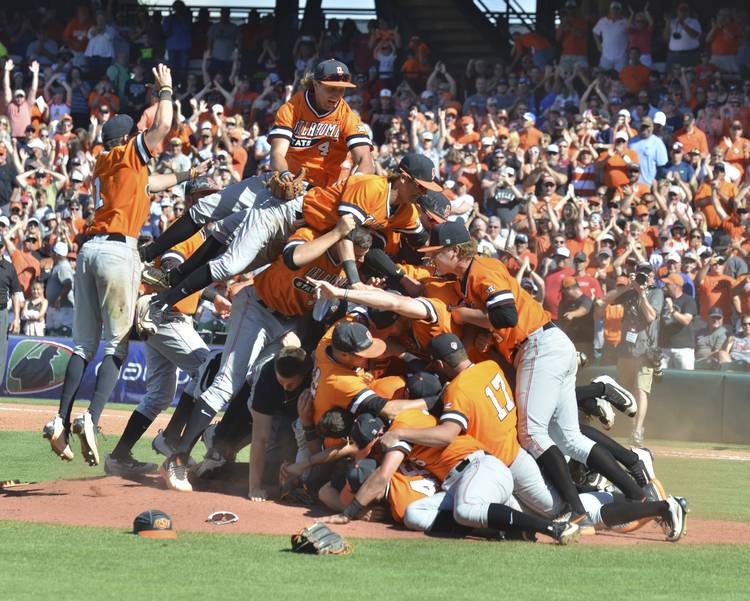 The Oklahoma State baseball team dogpiles on the mound after beating Texas in the Big 12 Tournament championship game in Oklahoma City on Sunday. (AP Photo/Kyle Phillips)

The Longhorns dropped to 37-22 with the loss at Chickasaw Bricktown Ballpark. Wins in six of its last nine games, however, have put Texas in position to snag one of the at-large bids to the NCAA Tournament.

The NCAA will unveil its bracket at 11 a.m. Monday. The selection show will be televised on ESPN2.

“This team has a lot of pride and has grown up together and has matured together,” Texas coach David Pierce said. “I think we still are getting better going into the regionals.”

Texas started Morgan Cooper on Sunday, but the Longhorns’ all-conference ace was working with a pitch count. Cooper needed 65 pitches to get through three innings. He struck out five while limiting Oklahoma State to three hits and a run.

Pierce said Cooper wasn’t going to top 80 or 85 pitches, but his day was done after the third inning. Then the game became a battle of the bullpens.

“For the most part, our bullpen did well,” Pierce said.

Trailing 3-1, Oklahoma State rallied once Cooper was removed. The Cowboys loaded the bases against Mayes and then brought all three runners home once Shugart entered the game. Oklahoma State hit back-to-back doubles off Kennedy in the sixth inning to extend its lead to 5-3.

In the seventh, Fischer took Ridgeway deep for his first home run of the season. The first eighth-seed ever to win the Big 12 Tournament, Oklahoma State (30-25) will head back to the NCAA Tournament after reaching the College World Series in 2016.

“We were pretty much kicked to the curb and left for dead when it comes to having any type of run in us,” Oklahoma State coach Josh Holliday said. “These kids deserve all the credit.”

Over its five games in Oklahoma City, Texas stranded 53 runners. Two of the last three left aboard were marooned on second base during the eighth and ninth innings.

Texas also let a golden opportunity slip through the cracks in the fifth inning. With one out and the bases loaded, Kody Clemens lined a ball that Oklahoma State’s Garrett Benge snagged at third base. After catching the ball, Benge caught Kacy Clemens off the bag for an inning-ending double play.

“It’s tough. Baseball is a game of failure,” Kacy Clemens said. “Kody hits a line drive, and a lot of times that ball gets through. … That’s just unlucky.”

Rounding the bases: Kacy Clemens, a first baseman, and shortstop David Hamilton were placed on the Big 12’s all-tournament team. … When he was hit by a C.J. Varela pitch in the first inning, junior Travis Jones broke a 10th-place tie with Ryan Brooks in the Texas record books. Jones has been hit by 22 pitches in his collegiate career. … Texas is now 5-1 in the Big 12 championship game. Two years ago, UT beat Oklahoma State for the conference crown. … Kacy Clemens and Bret Boswell each scored twice Sunday, and five different Longhorns drove in a run.