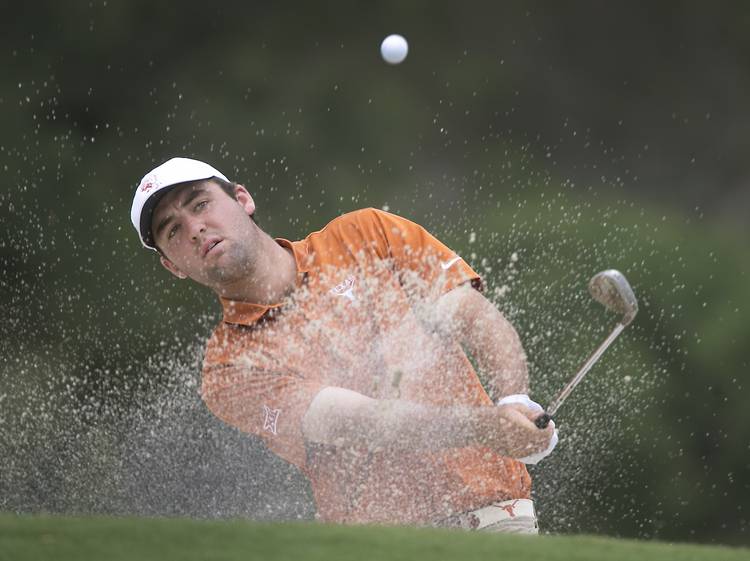 Texas golfer Scottie Scheffler struggled in the final round of stroke play at the NCAA Championship but still finished tied for third. (Ralph Barrera/Austin American-Statesman via AP)

Texas golfer Scottie Scheffler shot a 78 Monday to fall into a tie for third place as stoke play finished at the NCAA Championship in Sugar Grove, Ill.

The UT junior had three 68s to lead after each of the first three rounds, but his 6 over par Monday left him at 6-under 282, five shots behind medalist Braden Thornberry of Ole Miss. Mason Overstreet of Arkansas was four strokes behind Thornberry.

Matthias Schwab and Theo Humphrey of Vanderbilt matched Scheffler’s total, catapulting the Commodores into first place in the team standings at 13 under par — 12 strokes ahead of second-place Oklahoma.

The Longhorns were 12th at 14 over par and saw their season end as the field was cut to eight for match play.

“Today was a mixed bag for us,” UT coach John Fields said. “We knew going in it was going to be a challenging day, simply because the wind was strong and this golf course — the way it’s set up, the rough and the long fescue. If you hit it off line, it’s going to be extremely difficult. Unfortunately, we had several occasions where that happened and we had some big numbers — doubles and triples.”

Senior Gavin Hall had the best round for Texas on Monday, a 74 that left him at 2-under 286 for the tournament, tied for 11th place. Hall finished his UT career as a two-time All-American and a four-time Big 12 team champion. He had two individual titles and 19 additional top-10 finishes.

Scheffler completed his season with six top-three finishes, including a win at the East Lake Cup. He had 11 rounds in the 60s and shot 24 of 37 rounds at par or better.

The Longhorns finished in the top-five nine times, including their fifth straight Big 12 championship.

“There are a lot of teams that would love to trade places with us right now,” Fields said. “We have a lot of great experience going into next year. We are going to really miss Gavin Hall and Taylor Funk, but we are going to keep going.

“We will have a good team next year and keep building.