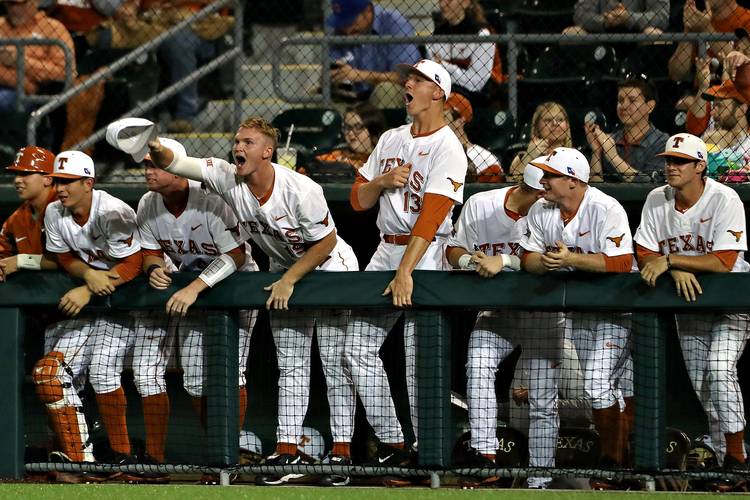 Nolan Kingham bested a highly-touted counterpart on Friday, and Texas opened its stay at Long Beach State’s regional with a 3-2 win over UCLA. The victory was Texas’ first at the NCAA tournament since 2014, and it helped Texas clear two season-long hurdles.

“We’ll take them however they come, whether it’s 10 runs or one run,” Texas senior Kacy Clemens said. “We do like to make it interesting sometimes, but we’ll take the win.”

Texas missed the NCAA tournament in 2016, but Kingham starred in the Longhorns’ return. An all-conference pitcher who was UT’s go-to arm on Fridays, Kingham allowed six hits and a run over 7.2 innings. Two of the right-hander’s pitches hit Bruins, but he struck out five and walked no one.

Kingham only needed 24 pitches to get through the first three innings. Through six, he had thrown 60 pitches. Kingham, who is responsible for Texas’ only two nine-inning complete games, was pulled with two outs in the eighth with a pitch count of 87.

“He didn’t have his normal velocity like we were expecting,” said UCLA shortstop Ryan Kreidler, who hit an eighth-inning home run off Kingham. “One thing good pitchers do is they make pitches when they don’t have their best stuff. I thought he did a good job of locating that fastball, and he kind of kept us on our toes.”

Opposing Kingham was UCLA ace Griffin Canning, who entered the postseason with a 2.34 ERA and 134 strikeouts. Projected as a high pick in this month’s MLB amateur draft, Canning also lasted 7.2 innings. He allowed six hits and two earned runs.

Friday’s duel came almost three months after Kingham and Canning both earned no-decisions in Texas’ 5-4 win in Austin. Kingham gave up five hits and one run over six innings on March 10. Canning surrendered six hits and three runs in a seven-inning stint.

“Everything basically came off my fastball,” Kingham said. “The no walks was huge, that helped me out. The two hit-by-pitches definitely hurt me, it made me bear down and make some pitches. Overall, it was a good outing.”

Texas got just enough offense for Kingham, who improved to 10-4 on the year. After three no-hit innings, Clemens turned a Canning change-up into a solo homer over the fence in right field. In the seventh and eighth innings — in what UCLA coach John Savage called the “two best at-bats they had,” — Bret Bowell and Travis Jones contributed a run-scoring single and double.

“When you have an outing like Nolan had today, as a hitter you’ve got to get him the win,” Clemens said. “You saw him perform at his best today, and that was huge for us for him to set the tone for us getting back to the tournament.”

UCLA (30-26) attempted a comeback in the final inning. Facing UT closer Beau Ridgeway and a 3-1 deficit, UCLA cut it to 3-2 and placed runners on first and second base with one out. After a mound meeting with head coach David Pierce, Ridgeway induced two fly balls to end the game and pick up his 12th save.

Ridgeway also ended the eighth inning with a strikeout of Sean Bouchard, who leads UCLA in home runs and RBIs. Ridgeway had just entered the game with two outs and a runner on second base.

Rounding the bases: On Saturday at 7 p.m. PST — 9 p.m. in Austin — the Longhorns will play the winner of the Long Beach State/San Diego State game. It’s a double-elimination regional. Pierce said junior pitcher Morgan Cooper (6-3; 2.32 ERA) will start for the Longhorns. … Former UT coach Augie Garrido was among those in attendance at Blair Field. … Boswell’s RBI scored Jones, who got to third base thanks to two errors. … Thanks to a sweep in March, Texas improved to 4-0 against UCLA this year.