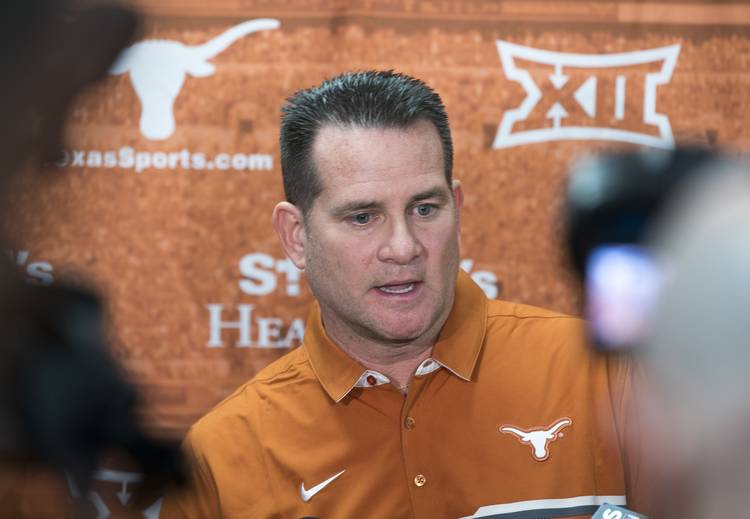 Texas hosted its second min-camp designed to build relationships with younger recruits in the 2019 class. One of the numerous names in the 2019 class to attend was five-star running back Noah Cain. The former Denton Guyer product transferred to IMG Academy in the offseason and is already noticing results.

“It was the right decision for me,” he said. “The academics are the main difference, but that gets me prepared for college. And I get to go against the best defensive line and linebackers in the country every day. We all improve.”

The 5-foot-11, 205-pound prospect is wanted by every major program in the country. A native of Baton Rouge, Cain admits LSU was his dream school for a long time. That doesn’t mean a school like Texas doesn’t have a shot.

“I want to take the recruiting process slow. I won’t release lists until after my junior year and I want to take all of my visits,” Cain said. “I only get to do this once. It’s a blessing to be in this position.”

Cain arrived on the recruiting radar as a freshman. He rushed for more than 1,000 yards and scored 11 total touchdowns. He backed that up with a stellar sophomore campaign, rushing for 1,683 yards and 22 touchdowns. The Longhorns are prioritizing Cain and the Texas staff made a strong impression Saturday.

“From the first time I came down here in March, I knew it would be one of my top schools. Coach (Stanley) Drayton is one of the best running back coaches in America. I spent about three-and-a-half hours with him today going over film,” he said. “(Texas) is only taking one running back in the 2019 class, so they’re making that pitch early.”

Cain plans to enroll early. It will give him a shot to compete for snaps as a true freshman. The Longhorns lack proven running backs and Cain thinks he fits what Tom Herman and Texas wants out of a running back. The lone commitment at the position in 2018 is from Carthage’s Keatonay Ingram.

“They want a complete running back. A guy who can pass protect, run out of the backfield and catch out the backfield. They also want a smart running back and understands the game. That’s why coach Drayton said I was the first 2019 running back they offered,” Cain said. “The thing they like most about me is my vision.”

Joining Cain on the trip to Austin was Allen High School quarterback. The 6-foot-1, 204-pound quarterback already holds more than 10 offers despite not yet becoming a starting quarterback at the varsity level. That will change in his junior season and the Longhorns are waiting to offer until the staff sees him compete.

Allen is one of the top programs in Texas high school football. Tisdale is ready to lead the largest school in the state.

“It is pretty exciting to get my chance,” he admitted. “You’re handed the keys to maybe the best program in the state. It is a lot of pressure, but it’ll be fun. I need to play my game, play relaxed and trust in my teammates and coaches.”

Tisdale is a dual-threat quarterback. He participated in drills during the camp, providing an up-close for Herman and offensive coordinator Tim Beck, who Tisdale is familiar with from Beck’s time at Ohio State. It was also an opportunity for Tisdale to meet Herman in person and continue building a relationship with the staff.

“I felt good about how I did. It was a great opportunity and I learned a lot,” he said. “The Texas staff is great. Building a strong relationship with the coaching staff is always important.”