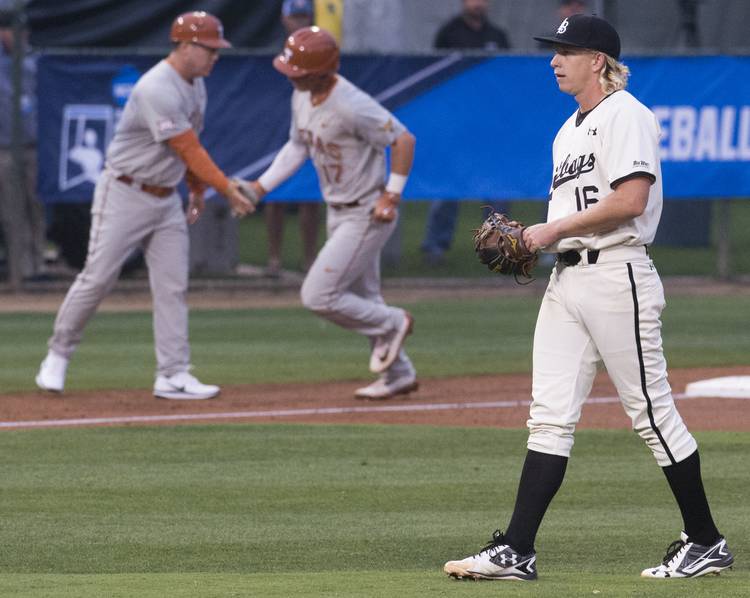 LONG BEACH, Calif. — David Pierce has been coaching baseball for nearly three decades, but Texas’ 5-3 win over Long Beach State on Saturday night was something the UT coach said was the “best ball game I’ve ever been a part of.”

Texas junior Bret Boswell has been associated with the sport for less time than Pierce. Still, Boswell diagnosed the 39th win of Texas’ season as the “craziest thing I’ve ever seen.” Teammate Travis Jones seconded that sentiment.

Descriptions aside, Texas 12th-inning triumph over the Dirtbags came in its second game at the NCAA tournament. The win keeps Texas undefeated in a four-team regional hosted by Long Beach State. Texas (39-22) will play either Long Beach State (38-18-1) or San Diego State (42-20) on Sunday night for the regional’s championship.

If Texas loses, the two teams must play again to see who advances to the super regionals.

“We’re kind of in control,” Boswell said. “We go into tomorrow, and we know that we just need to win one more and we’re in a super (regional). We’re looking forward to it.”

Saturday’s game had something for each of the fans in attendance at Blair Field. Dig the long ball? Texas hit three home runs, and Long Beach State’s Brock Lundquist also went deep. Prefer pitching? All-Americans Morgan Cooper and Darren McCaughan earned no-decisions but performed admirably. How about defense and drama? Then the ninth and 10th innings were for you.

Let’s start with those defensive plays.

Patrick Mathis with a GAME SAVING SNAG for Texas in the bottom of the 9th! #RoadToOmaha pic.twitter.com/q5SmaSgvCH

Long Beach State twice had chances to walk off with a win, but Texas was bailed out by its defense. With a runner on second base in the ninth inning, Texas right fielder Patrick Mathis made a diving catch to end the threat. One inning later, the drama intensified.

Barehand relay executed to perfection and Texas cuts down the would be walk-off run!! #RoadToOmaha pic.twitter.com/UqPQXFPWJA

UT pitcher Chase Shugart threw an errant pickoff throw to first base with one out, but Luke Rasmussen was gunned down by Bret Boswell as he attempted to take third. Long Beach State leadoff hitter Jarren Duran then hit a ball to left field that was misplayed by Austin Todd. Instead of settling for an easy triple, Duran rounded the base and went for the knockout punch. Texas third baseman Ryan Reynolds, however, bare-handed the relay throw into the infield, and he fired a strike to beat Duran’s head-first slide to the plate.

Those defensive plays overshadowed three Texas errors, an uncharacteristic effort for a defense that still ranks second in the NCAA in fielding percentage. Two of those errors led to Long Beach State’s third run. The Dirtbags also scored on a delayed steal in the first inning.

“We don’t want to look back,” Pierce said. “When you make a mistake, you’ve got to get over it, you’ve got to clean-slate it. That’s what we’re doing, that’s why we’re able to make those plays. Their minds are clear. They’re just out there competing and having fun.”

Texas tied a season-high with its three home runs, all of which were solo shots. Boswell hit homers in the second and seventh sessions, and Zane Gurwitz’s eighth-inning blast forced a 3-3 tie.

Those three home runs, however, did not end up being the biggest of Texas’ nine hits. After Long Beach State retired 11 Longhorns in a row, Texas loaded the bases with one out in the 12th inning. Texas chose not to send Reynolds from third base on a flyout to center field, which set the stage for Jones. Facing a 1-1 count against Dirtbag reliever Chris Rivera, Jones drove in two runs with a single to left field.

The two-run hit gave Texas its first lead of the evening.

“I think a lot of things go unnoticed just because I had two winning RBIs,” said Jones before lauding Boswell and Gurwitz’s homers. “I feel like I did my part, but a lot of things have been overlooked by what happened in extra innings.”

And finally, let’s not forget about the pitching. Cooper and McCaughan were overshadowed by the late-game theatrics, but the Collegiate Baseball All-Americans did not disappoint in their duel.

Cooper threw 100 pitches over eight innings, and he allowed six hits and two earned runs. Cooper struck out seven, and he had a string of 10 straight outs between the third and sixth innings. McCaughan allowed five hits and was just as solid during his seven-inning outing.

Rounding the bases: Gurwitz hit his first home run since April 28. … Long Beach State and San Diego State, which needed 13 innings to beat UCLA on Saturday, will meet at 1 p.m. PST on Sunday. Texas awaits at 7 p.m. … After earning a save in Friday’s 3-2 win over UCLA, Beau Ridgeway was the winning pitcher against Long Beach State. Ridgeway threw two innings of one-hit baseball. … Thanks to Cal State Fullerton’s taking of Stanford’s regional, Texas could be in line to host a super regional if it survives this weekend in Long Beach.