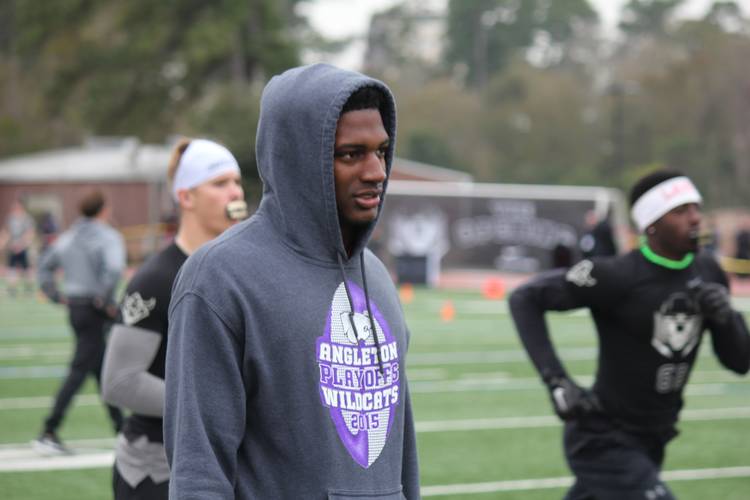 Texas is building the best secondary class in the country for 2018. The Longhorns already held commitments from four-star safeties Caden Sterns and DeMarvion Overshown. Tom Herman’s program added a five-star prospect when Angleton’s B.J. Foster announced his commitment on Monday.

Foster is a dynamic two-way player, starring at Angleton at running back and in the secondary. He missed a bulk of the 2016 season with a knee injury, yet is still ranked No. 2 on the Fabulous 55. The 6-1, 190-pound defender is the No. 1 ranked safety in the nation and the No. 16 overall prospect in the country, per 247Sports’ composite ratings.

Skill set: Foster is a dynamic prospect with unlimited potential. His high school head coach, Ryan Roark, said the only players he’s coached with Foster’s ability have ended up playing in the NFL. That’s Foster’s goal. He’s a unique blend of size, length and raw athleticism. At 6-foot-1 and nearly 190 pounds, he’s ideally built to play free or strong safety. His range in the secondary is unmatched in this cycle and it’s why he’s the No. 1 ranked safety in the country.

Foster made an impact as a sophomore, earning all-district honors as a running back and a defensive back, ending the year with 1,032 yards and 16 touchdowns. He added two interceptions and was named District 24-5A’s utility MVP in 2015. He only played five games as a junior due to a knee injury. Durability is Foster’s only concern as a player.

Immediate impact: Foster wants to play as a freshman. He’ll get that opportunity because Texas hasn’t exactly played stellar defensively in the secondary the past few years. The Longhorns need long, fast safeties to cover ground against the pass-happy spread offenses in the Big 12. Foster is ideally suited for the role and will make a push toward Texas’ two-deep once he arrives on campus. His commitment also helps in recruiting; Herman is known for recruiting Houston and Foster is the first domino to fall from the area. Texas is moving up the recruiting ranks and now has a headliner in the fold by early June.

Fitting into the program: Foster can play multiple secondary positions, which gives him added value to new defensive coordinator Todd Orlando. Foster possesses the range to play free safety and is physical enough to play closer to the line of scrimmage as a strong safety. He’s the rare safety who’s big enough to cover tight ends and athletic enough to cover elite receivers. He’s the biggest recruiting win for Herman since taking the job at Texas.

Recruiting at the position: The future of the UT secondary is in good hands. The 2018 class now consists of Foster, four-star safety Caden Sterns and four-star safety DeMarvion Overshown. Foster, Sterns and Overshown look set as safeties; Overshown also could grow into an outside linebacker, while Sterns has indicated he’ll start his career at cornerback. The Longhorns should be done at safety with Leon O’Neal appearing to be a long shot.

The focus in the secondary now shifts to cornerback and elite prospects like Anthony Cook, D’Shawn Jamison and Jalen Green.

Loss to Dirtbags puts baseball season on the line for Longhorns