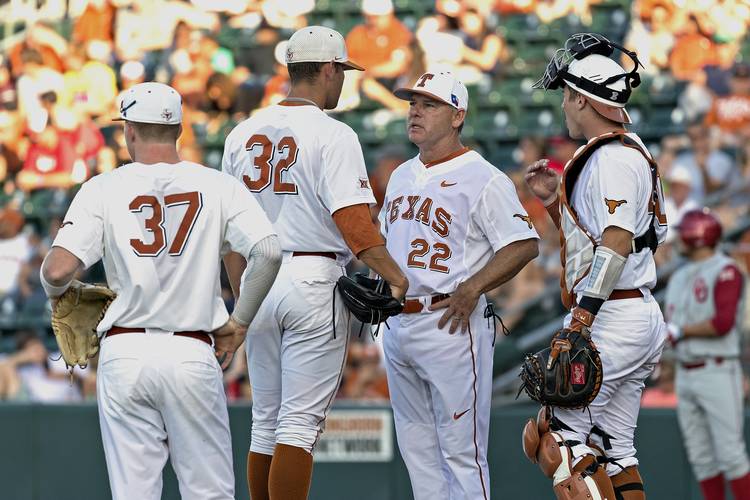 LONG BEACH, Calif. — On Monday night, the postgame celebration was for Texas to watch. The congratulatory handshakes were given by the Longhorns, not received.

Texas was held to four hits by a potluck of Long Beach State pitchers in a 2-1 loss at Blair Field. The loss in the seventh and final game of the Long Beach State-hosted regional ended Texas’ season, its first under head coach David Pierce. After missing the NCAA tournament in 2016, Texas closes out the spring with a 39-24 record.

“We just didn’t get a clutch hit or make a play when we needed it,” Pierce said. “Hats off to their team, we had a great season.”

Neither offense got going on Monday as both teams were gifted their runs. After the striking first on a Longhorn error, Long Beach State increased its lead to 2-0 on a third-inning play that saw Lucas Tancas successfully break for home while a teammate was caught in a rundown. Two innings later, Texas scored its only run on a wild pitch.

Limited to 12 runs over its four games at the NCAA tournament, Texas had its offensive woes highlighted in the sixth inning. A one-out double by Travis Jones pushed Zane Gurwitz to third base and forced a pitching change. The only left-hander in the Long Beach State bullpen, Zak Baayoun cleaned up the mess by retiring Kacy Clemens and Bret Boswell on called strikeouts.

“The ball kind of jumps out of his hand. So you’re looking for that fastball and then when he throws a slider, sometimes it’s hard to pick up,” Boswell said. “We weren’t able to get it done, and that was probably the biggest point of the game right there.”

Baayoun was one of six pitchers that Long Beach State coach Troy Buckley threw at Texas. With his team playing its fifth game since Friday, Buckley said he had mapped out a pitching plan that featured a three-inning start from Dave Smith, two-inning relief appearances from Connor Riley and Eli Villalobos and one-inning stints for Josh Advocate and Chris Rivera. Baayoun would be called upon if needed.

“I love these guys to death and I’ll take a bullet for anyone of them,” Smith said. “The least I can do is go out and pitch.”

Texas countered with the trio of Nick Kennedy, Chase Shugart and Beau Ridgeway. Kennedy was credited with both runs and the loss, but Shugart limited the Dirtbags to three hits over 3.2 innings. Kennedy maintained the score during Texas’ final five outs on defense.

“Chase and Beau did a great job of pitching in and utilizing their slider away,” Pierce said.

Texas had won its first two games at Long Beach State’s regional, with one of those successes being a 12-inning victory over the Dirtbags this past Saturday.  Following its 2-0 start, Texas needed only one win to secure its first trip to the super regionals since 2014.

The Longhorns instead lost 4-3 and 2-1 decisions to Long Beach State. The losses were Texas’ 16th and 17th one-run defeats of the season.

“Looking back, we felt like we had the advantage,” Jones said. “They did a great job battling back and really fighting with us. We fought back, but at the end of the day we lost.”

Rounding the bases: Gurwitz, who was one of three seniors on Texas’ roster, collected two of the Longhorns’ hits. He broke up Long Beach State’s no-hit bid in the fourth inning. … Long Beach State improved to 41-18-1. … Thirty-nine wins gives Pierce the most wins for a baseball coach in his first year at Texas. Augie Garrido won 29 times in 1997. … The Big 12 had seven representatives in the NCAA tournament, but Texas became the conference’s sixth team to get bounced in a regional. Only TCU reached the super regionals.