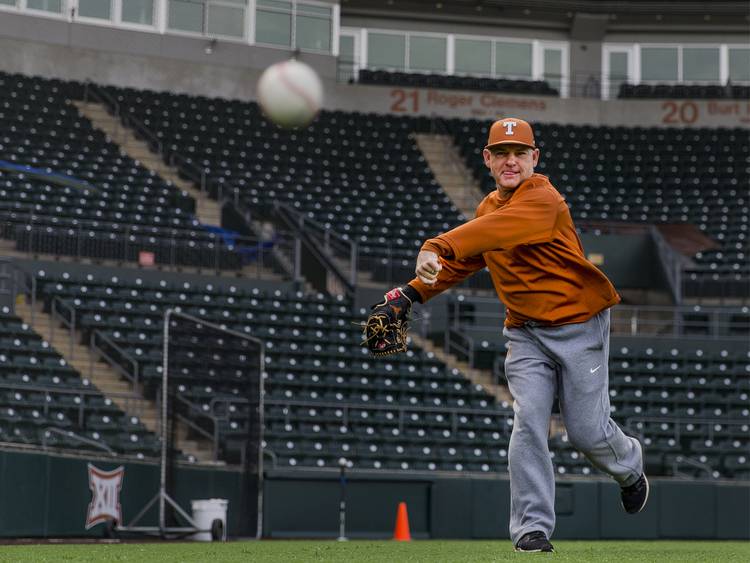 In all likelihood, Texas’ 2017 baseball season was going to end with a loss. Unless the Longhorns won it all — a six-time feat for the program — the last edit to Texas’ record would be in the loss column.

That was the case on Monday, when a 2-1 loss to Long Beach State eliminated the Longhorns from the NCAA tournament.

For a team that missed the 2016 tournament, though, the one-run loss to the Dirtbags was better than the alternative.

“When you end in the postseason, you’re going to end with a loss unless you win the national championship. It’s that simple,” Texas coach David Pierce said. “I’d much rather be in this position than not making the postseason. It leaves a bitter taste in your mouth, but that’s what we can build on. That’s how we grow.”

Texas wrapped up its first season under Pierce with a 39-24 record, a 14-win improvement from Augie Garrido’s final year. The Longhorns reached the championship game of the Big 12 tournament in May, and UT won its first two games at the Long Beach State-hosted regional.

The Longhorns were backed throughout the season by their pitching and defense. Texas ranked fourth among 295 Division I teams in fielding percentage and double plays. And the Longhorns’ 3.15 staff ERA is the nation’s ninth-best.

Right-handed pitchers Morgan Cooper (6-3, 2.32 ERA) and Nolan Kingham (10-4, 2.84) both earned all-conference honors, and Cooper was a Collegiate Baseball All-American. Beau Ridgeway’s 12 saves were the most for the school since 2011. Kyle Johnston posted a 3.56 ERA as Texas’ third starter. Nick Kennedy developed into a reliable hybrid that could both start and relieve.

Seventeen of Texas’ 24 losses were one-run games; the Longhorns went 9-15 in them. Texas also went 12-16 away from Austin.

Despite the hitter-friendly renovations that were made at UFCU Disch-Falk Field, Texas struggled to hit in 2017. UT’s .252 batting average ranked 263rd in the nation, and only one Big 12 team scored fewer runs. Texas averaged 5.1 runs per game, and it was held to 12 runs over its four games in Long Beach.

The Longhorns had only two seniors who contributed, but will still keep an eye on next week’s MLB amateur draft. Expected to be a high-round pick, Cooper has said he’s unlikely to return to Texas. Junior infielder Bret Boswell told reporters last month that he’s unsure about his future, but he also has already graduated so there’s less incentive for a return to campus. Players like Johnston, Jones and outfielder Patrick Mathis are also draft-eligible.

Even if it gets dinged in the draft, Texas can be optimistic about its future thanks to the play of a quartet of freshmen. Shortstop David Hamilton tied for the team lead in steals, and his 213 defensive assists were the ninth-most in school history. Third baseman Ryan Reynolds also was solid defensively, and the team’s only switch-hitter hit five home runs. Austin Todd appeared in 48 games as an outfielder, and pitcher Blair Henley beat super regional qualifier TCU at the Big 12 tournament.

Pierce hesitated to use the word “culture” when he reflected on his first year at Texas. He did describe the Longhorns’ buy-in to his coaching as “refreshing” and said his tenure was off to a “good start.” The former Tulane coach was hired to replace Garrido — who had been at Texas since 1997 — in June 2016.

Oklahoma coach Bob Stoops, long a thorn in Texas’ side, steps down in Norman