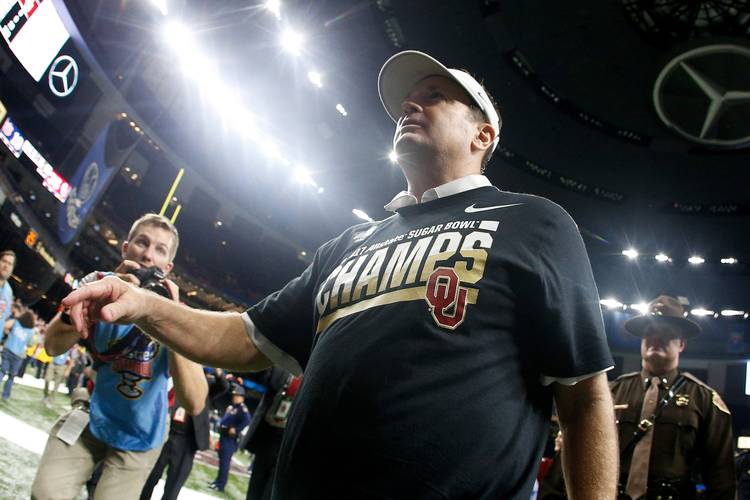 On a sweltering August day in 2005, Oklahoma coach Bob Stoops was drenched to the bone, his visor dripping sweat and a little bruised from being violently thrown in disgust.

Stoops met with reporters on the practice field, as was custom then. He was shown a folded piece of paper — a stunning image of a “Texas Monthly” cover featuring an ornery Mack Brown. “Let’s go kick some O.U. butt,” read the tagline. At the time, Stoops was riding a five-game winning streak over the Longhorns. He looked at the image and sniffed.

“You tell ’em,” Stoops said in his unmistakable Midwestern staccato voice, “we’ll get off the bus.”

The Longhorns did get the upper hand that season, winning 45-12 in Dallas en route to their national championship. But Stoops was a thorn in Brown’s side and the Longhorns’ for 18 years, posting an 11-7 record against UT and winning 10 Big 12 titles from 1999-2016.

The Cotton Bowl will have a much, much different feel this season. Stoops announced Wednesday he was stepping down and was indeed “the luckiest, most fortunate guy in the world.”

RELATED COVERAGE: Bohls: Who are the winners and losers from Bob Stoops’ retirement?

RELATED COVERAGE: Golden: Bob Stoops’ departure is a blow for OU, the Big 12 and college football

But Wednesday was all about Stoops, a Youngstown, Ohio, native who played defensive back at Iowa and learned how to coach while working for taskmaster Bill Snyder at Kansas State.

“The coaching life, I equate to it a relay race,” Stoops said. “I really am grateful for the opportunity to run the race I have.”

Stoops led the Sooners to the 2000 national title in only his second season, the key driver of the nickname “Big Game Bob” that he alternately relished and loathed. But it burned him greatly whenever outsiders crowed that Stoops did it all with Blake’s players.

The fire-breathing defensive coordinator from Florida used that as fuel. The Sooners played in the Cotton, Rose, Sugar and Orange Bowls from 2001 to 2004, thumping the Longhorns and just about everyone else along the way.

“Our rivalry game became a focal point of college football every year and was great for both schools, the Big 12 and college football as a whole,” Brown said in a statement. “He leaves Oklahoma with a long track record of success and will be remembered as a Sooner legend. I wish him the best.”

Stoops got the Sooners back to the national stage in 2006 but lost to Boise State in one of the biggest David-vs.-Goliath matchups in college history. OU played for another national title in 2008 but lost to Florida.

More bowl games followed — 18 in all, going 9-9 in the process. OU’s fan base grew accustomed to such outrageous success that there was real disgruntlement when the Sooners went 8-5 in 2014. A sizable chunk of the fan base wanted Stoops out. All Stoops did was go 22-4 the next two years.

So why now? Even OU legend Barry Switzer was stunned. “It just doesn’t make sense,” the coach known around Norman as “The King” said on Oklahoma radio station WWLS.

Was health an issue? Stoops’ father Ron, another coaching lifer, collapsed on the sideline, gone after a massive heart attack at the age of 54. In a statement, Stoops, who’s 56, said his health “was not the deciding factor in this decision.” He expanded at the press conference by saying, “When is the right time?”

“We’re in a cycle yearly that never stops,” he said. “There isn’t a good time, that’s the bottom line. Here in the last week-and-a-half, I knew it was the right thing to do for me personally.”

“He’ll be sorely missed at Oklahoma, in the Big 12 and on the landscape of college football,” Herman said in a statement.

Stoops leaves the Sooners with a career record of 190-48 (.798). It’s the most wins of any Power Five school over the last 18 years. He has the résumé of a first-ballot College Football Hall of Fame member.

“Very few people make that decision about when it was time to go,” OU President David Boren said. “I would say that I have never seen it made with greater unselfishness. … He has decided to hand on this program to new leadership at a time when it’s never been stronger.”

So, in the end … That’s one of Stoops’ favorite clutch phrases. But that’s where he is, it seems. Stoops said he and his wife Carol and their three children will remain in Norman. The couple recently bought a $2.25-million house in Chicago, but this family is now Oklahoman through and through.

As Boren said, “We’re going to be talking about his era for many years to come.”