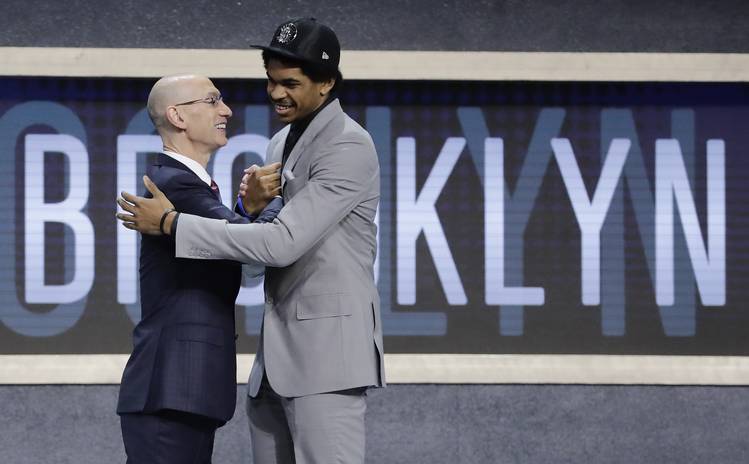 Over the past seven months, Jarrett Allen has scored 20 points and learned his NBA fate at the Barclays Center in Brooklyn.

Soon, that venue will become his home.

On Thursday, the Brooklyn Nets chose Texas’ freshman center with the 22nd pick of the NBA Draft. The draft was hosted by the Barclays Center, which was also the location of the fourth and fifth games of Allen’s collegiate career. The Nets play their home games at the Barclays Center.

“Yeah, I’m excited about being here,” Allen told reporters in a post-pick press conference. “It’s a busy city, busy life.  I mean, personally I could do with a little more trees, but I’m happy to be here.”

Another longhorn in the league. Salute that man. #JarrettAllen

The selection of the 6-10 Allen marked the 43rd time that a Texas player was taken in the NBA Draft. Sixteen of those Longhorns have been first-round picks. Indiana center Myles Turner — the 11th pick in 2015 — was the last draftee claimed by UT.

A product of St. Stephen’s High, Allen is also the first graduate of an Austin-area high school to get drafted in 17 years. Chicago took Westlake’s Chris Mihm, who spent three seasons at Texas, with the seventh pick in the 2000 NBA Draft.

From Texas to the NBA Draft's first round

Allen played only 33 games during his brief stint at Texas, but he started in each of those contests. Allen averaged 13.4 points, 8.4 rebounds and 1.5 blocks per game. Even though he didn’t make a three-pointer, Allen connected on 56.6 percent of his shots.

An All-Big 12 third-team honoree, Allen finished third in the conference in rebounds. He placed fourth in the Big 12 in blocks, and only Kansas State forward D.J. Johnson (62.3 percent) boasted a better shooting percentage.

“I’m super excited for Jarrett and his family,” Texas head coach Shaka Smart said in a press release. “This is a life-changing day. I truly believe he will continue to make explosive growth. He has all the attributes of a player who will get better and better with time.”

Allen joins a rebuilding Nets team that had a league-worst 20-62 record this past season. The Nets lost Thursday’s No. 1 overall pick because of a 2013 trade with Boston, but it still had two slots in Thursday’s 60-player draft. Earlier in the week, Brooklyn reportedly picked up D’Angelo Russell — the second pick in the 2015 draft — in a trade with the Los Angeles Lakers.

The Nets allowed 112.5 points per game during the 2016-17 season. Among the NBA’s 30 teams, only the Phoenix Suns surrendered more (113.3). Allen, though, thinks he can help on that end of the court. The first-ever Longhorn drafted by the Nets went with a defensive answer when asked about the skills he’d bring to the NBA.

“Like blocking shots, guarding pick-and-rolls, just doing everything on that end,” Allen said. “And then on the offensive game, I have a pretty basic skill set, just kind of back to the basket, trying to work on my face-up game and shot.”

Allen’s big night comes 32 years after the Dallas Mavericks used a third-round pick on San Diego State’s Leonard Allen. Jarrett’s father, who was the 50th selection in 1985, never appeared in an NBA game but did play overseas.

“He was just really proud,” Allen said. “He’s always been really proud of me, but to see me finally picked, walk across that stage and shake his hand meant a lot to him. He couldn’t stop smiling.”