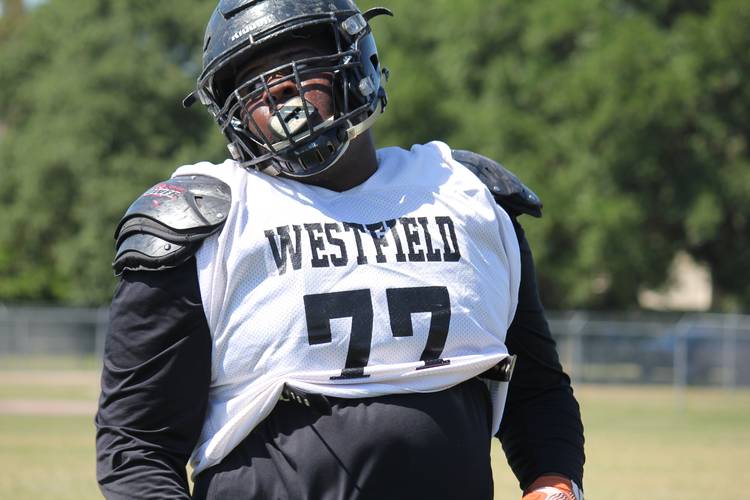 Texas needs at least one defensive tackle in 2018 and Coburn is the top target on the board. The 6-1, 325-pound tackle is familiar with the Texas coaching staff. Assistant coach Corby Meekins was his high school head coach before taking a job under Tom Herman at Houston. Meekins’ brother is now the head coach at Westfield and Daniel Young, a 2017 running back from Westfield, signed with Texas in February.

Coburn is a bull. His low center of gravity gives him an advantage staying low and using leverage to his advantage. He lacks ideal arm length for a defensive lineman, but he makes up for it with a strong motor and unusual athleticism for a prep player carrying well over 300 pounds. Coburn can play in multiple gaps at tackle. His strength allows him to shade the center and take on double teams while his athleticism also allows him to create havoc with penetration when shading the guard.

Coburn is considered a Longhorns lean.

Wright is the best defensive lineman in Texas for 2018. He recently committed to Texas A&M, but that won’t stop the Longhorns from pursuing the 6-4, 270-pound four-star talent. Wright is a versatile end with a chance to grow into a defensive tackle by the end of his college career. Wright plays in a 3-4 system in high school and is asked to take on double-teams nearly every snap. He’s looking for freedom as a pass rusher in college. It’ll be hard to sway Wright away from the Aggies.

Ossai’s stock continues to rise in recruiting circles. The 6-4, 217-pound athlete can play defensive end or rush linebacker at the college level. He’s incredibly athletic and naturally gifted for his size. He didn’t start playing football until middle school when he discovered the sport at his uncle’s house after moving to America from Nigeria. Ossai now holds more than 30 offers from Power Five programs around the country. It looks like Texas A&M and Texas will battle for his signature. The defensive end is on record saying A&M is his dream school, so the Aggies should be considered the favorite at this stage of his recruitment.

Another defensive tackle Texas is monitoring. The 6-4, 275-pound four-star prospect has the ideal build for a defensive tackle. He’s long and has the frame to add 30 pounds once he steps on a college campus. Brown is raw, but his upside might be larger than any other defensive tackle in Texas during the 2018 cycle. He also plays at the same school that produced Texas quarterback Shane Buechele. If Texas takes two tackles in the class, Brown will be the top target following Coburn.

The Opening Final preview: 14 Texans set to compete in Oregon