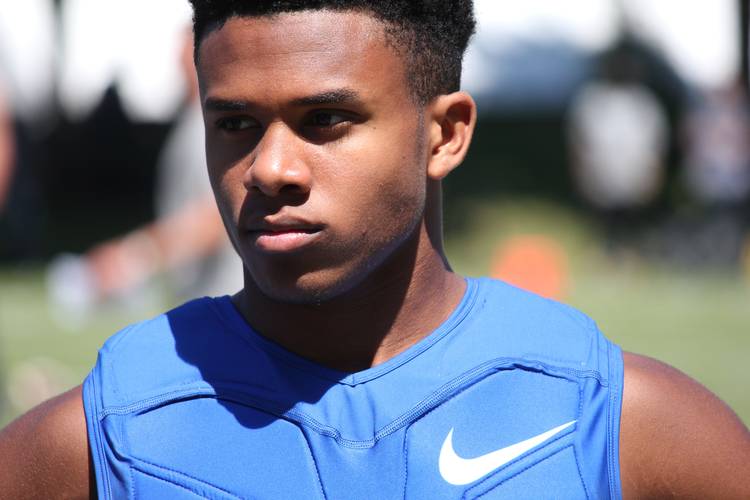 BEAVERTON, Ore. — The newest Texas commitment participated Thursday in the first day of The Opening Final event hosted by Nike. Rondale Moore, a four-star slot receiver out of Trinity High School in Kentucky, pledged to the Longhorns on June 25, a week after visiting the campus with his uncle.

“Austin is a great city to live in, first and foremost,” Moore said. “Secondly, (Red) McCombs Business School. It stood out to me when I got there. Also, how I’ll be used in the offense.”

Moore stands just 5-8. He’s a speedster who posted one of the best SPARQ scores in the nation, a measurement The Opening uses for overall athleticism. Moore predicted he’ll record a 4.29 in the 40-yard dash. It’s a trait Texas understands and is ready to deploy.

“Coach Tom Herman is very intelligent, a guru on the offensive side of the ball,” he said. “I like the way he’ll move me around and put me on guys who don’t want to guard me by moving me around.”

Moore will play slot receiver for the Longhorns, more specifically a position Texas calls the H. It’ll allow Moore to line up in the slot, in the backfield and to go in motion on jet-sweeps and fakes. The position calls for a versatile player with game-changing speed who can catch like a wide receiver and run like a running back.

“I’m very versatile. I believe with the jet-game I can help get other people open because defense’s get so focused on the jet-game. It leaves verticals open by moving the safeties and linebackers,” Moore said. “And the return game, which is something I specialize in.”

Moore is one of 166 prospects from around the nation expected to compete in the week-long The Opening Finals. The first two days consist of just quarterbacks, wide receivers and tight ends. Eventually the groups will split apart and compete in 7-on-7 games starting over the weekend and concluding Monday.

The state of Texas is well-represented with 14 players in attendance. Moore is one of three prospects set to participate, along with elite safeties B.J. Foster and Caden Sterns. Herman’s program is also in hot pursuit of four-star wide receivers Al’Vonte Woodard and Brennan Eagles. Moore, Eagles and Woodard are already building a bond, and it started before the three arrived Wednesday in Oregon.

“They are the two dudes I talk to the most. We talk four or five times a day on a group message,” Moore said about Woodard and Eagles.

Texas lost one slot receiver to de-commitment in Florida’s Justin Watkins. Longhorns fans are sure to worry about the same for Moore. He wants to put the fan base at ease.

“I’m 100-percent committed,” he said. “Before I committed I heard from Ohio State every day. After I committed, I called all the teams in my top six and thanked them for offering me a scholarship and believing in me.”

Moore plans to visit Austin with his parents before the start of the season, but he’s not sure on the possible dates.