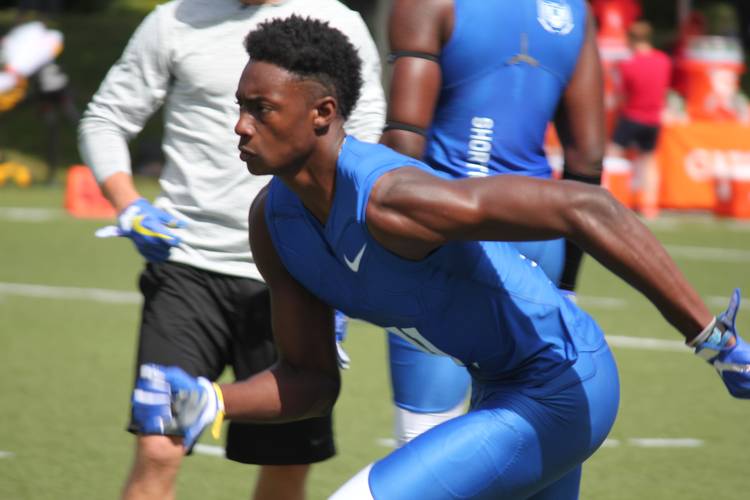 BEAVERTON, Ore. — The initial day of The Opening Finals is tedious. Quarterbacks, wide receivers and tight ends are the only position groups at practice and the day is spent working on fundamentals and route concepts. It’s not always exciting.

And then you notice the legendary faces, specifically Jerry Rice, dressed in workout clothes and running routes with teenagers.

All four are in Beaverton, learning and watching from Rice.

“I’m watching his every move,” said Woodard, the No. 13-ranked prospect on the Fab 55. “I’m hoping to be a visual learner and then approach him if I’m not understanding something.”

It’s easy to get lost in recruiting hype. Rankings and stars tend to dominate the headlines at events like The Opening. We focus less on the process and more on the future. At the end of the day, the goal for the athletes is to learn and improve.

“It’s a great experience with legends helping us learn the game. I just try to take their advice, soak it all in and have a great experience,” said Bush, No. 55 on the Fab 55. “It’s not about proving I belong as much as learning new things. I have a chance to do something a lot of athletes don’t get to do and I want to enjoy it and come back to school with new routes and a mindset.”

Texas wants at least four receivers in the 2018 class and there’s a chance those four might all be in Oregon at the same time. Moore is committed. Woodard and Eagles are considered heavy Texas leans, with Woodard set to announce July 15 and Eagles two days later.

“Building relationships with people here is important because you can know how it would feel to play in college together,” Woodard said. “Texas has recruited me well with coach Drew Mehringer and Tom Herman.”

Moore said Thursday that he, Eagles and Woodard chat multiple times a day in a group text, which is another good sign for Longhorns fans.

The wild card becomes the fourth receiver spot. Texas could opt for a second slot option like Jaylen Waddle, or it could concentrate its efforts on an outside player in Bush. It’s likely the Longhorns would find room for both, if necessary. Bush received a UT offer June 17. It was his 44th.

“The late offer didn’t hurt Texas’ chances. Now that it came, we have to take Texas a lot more serious,” Bush said. “We visited there with Heat Wave and I talked with the coaches. It was more of a family type talk at first, but then it got down to business. They explained the situation and why it took so long. It’s a big offer for us because it is right down the road.”