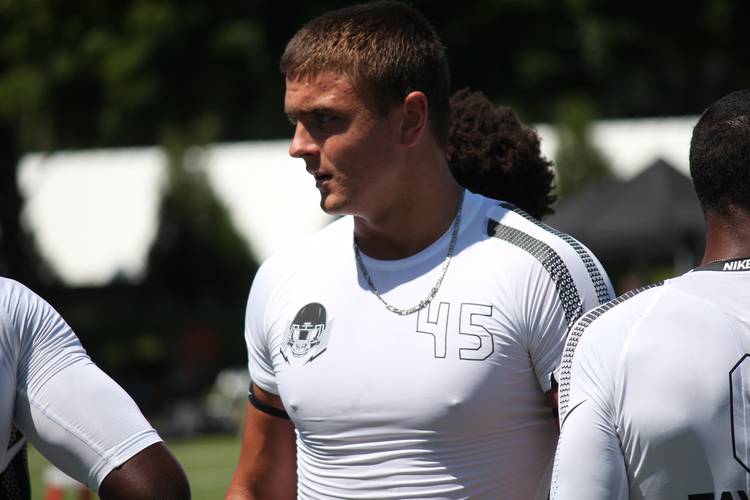 BEAVERTON, Ore. — Tight end is a coveted position in Tom Herman’s offense, and it’s a position the Texas staff made a priority in 2017 by signing two players late in the cycle. The Longhorns have yet to land a commitment from a tight end for 2018, though it remains a priority; Texas plans to sign two if possible.

In-state options Malcolm Epps and Mustapha Muhammad are still on the table, as is junior college target Dominick Wood-Anderson, who has said he will announce his decision Dec. 1. Another name fans should follow as the summer progresses is Carterville, Ill., four-star prospect Luke Ford.

The 6-6, 248-pounder is one of six tight ends in the 2018 class with a Texas offer. Ford holds 28 offers and listed Alabama and Auburn as his favorites during day two of the Opening Finals in Oregon. But that doesn’t mean he’s not aware of the Longhorns.

“I want to make a well-informed decision,” Ford said. “Arkansas is still in the race, Texas, Georgia and more schools. Tight end coach Corby Meekins Facetimes me all the time. He’s a funny guy, a nice guy. We’re building a good relationship.”

Ford, who plans to visit Texas in July, is aware of the momentum Herman is building.

“I’ve noticed (Texas’ class), and it is crazy. He’s going to turn the program around,” Ford said. “Texas wants to use me as a traditional tight end. Half the time I could be flexed out and half the time I would be lined up like a regular tight end, a do-it-all type of position.”

Ford doesn’t plan to commit until after his senior season. He said he wants to watch the programs interested in him and how each uses the tight end. The No. 4-ranked tight end in the country also is interested in depth charts, which makes Texas a legitimate option.

“Alabama and Auburn would be my top two schools right now, but one of the things I like about Texas is the depth chart,” he admitted. “My goal is to play. I’m not sure I want to wait until my junior or senior year to get on the field. A lot of factors play into picking a college.”