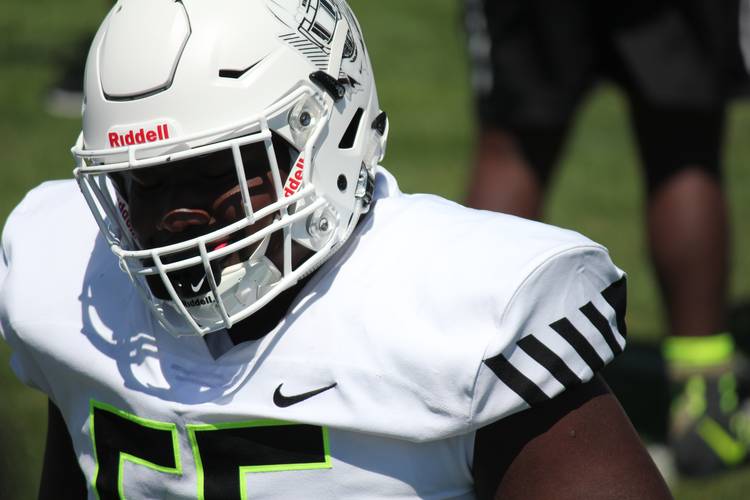 Both are at The Opening and hold Texas offers. Each also plans to visit UT before the end of the summer, giving Tom Herman’s program a reason for optimism. Texas already holds four out-of-state pledges for 2018, more than a third of the 11 total.

Hill plans to visit Austin this month, though he isn’t sure on an exact date. The 6-3, 345-pound four-star guard out of Houston County High in Warner Robins, Ga. is the No. 29-ranked overall prospect in the country and the No. 2 guard for 2018 cycle, per 247Sports’ composite ratings. Texas is one of 26 schools that have offered Hill.

“The vibe with coach (Texas offensive line coach Derek) Warehime is great on the phone,” Hill said. “He seems like a great guy and I want to go see what Texas has to offer. I’m not too familiar with Texas, but I know it is a top-notch program and a great school.”

Hill plans to decide in December and sign during the newly improved early signing period that same month. He also plans to take all his official visits, with USC being the only school he knows for sure will be included.

“I play tackle in high school, but I know with my body type I’ll be best at guard and center,” he said. “I think I’m one of the best in the nation.”

Perkins is a 6-3, 250-pound defensive end out of Lutheran North High in St. Louis, Mo. The four-star prospect is ranked the No. 115 overall prospect in the nation and the No. 5 weak-side defensive end in the 2018 class. Perkins is close friends with Texas linebacker commitment Ayodele Adeoye, and plans to visit Texas July 21.

“I’m excited to get to Texas and talk to coach Herman and coach (Oscar) Giles more,” Perkins said. “Texas is building a great recruiting class and I want to experience the culture down there. I want to see what all the hype is about.”

Perkins said he remains in constant contact with Giles, and that the new scheme the defensive coaches at Texas are installing is something he enjoys.

“Coach Giles thinks I can play in multiple spots, and versatility is something I pride myself on as a player,” he said. “I can stand up and play on the edge or as a three-technique inside the offensive tackle. He sees me moving around and making an impact.”

Defensive backs lead the charge of Texans during The Opening Final