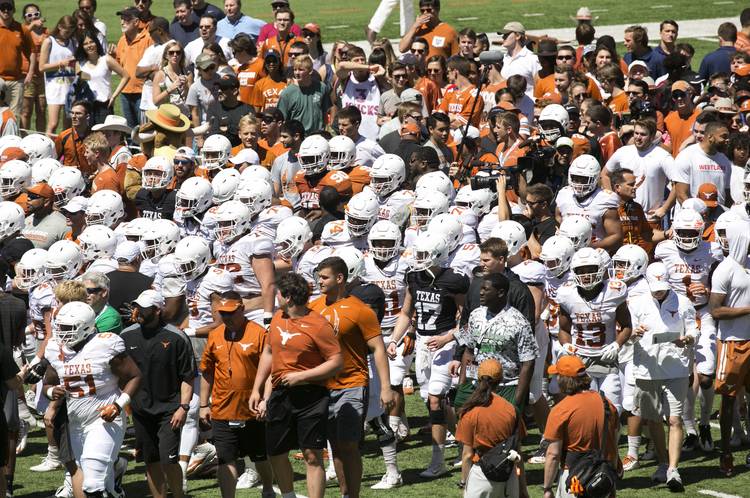 Texas students stand on the field to get an up-close look at the Longhorns football practice at Royal-Memorial Stadium on Saturday March 25, 2017. JAY JANNER / AMERICAN-STATESMAN

Preseason polls make excellent summertime fodder as we fritter away the days waiting for football season to begin. They’re forgotten by Labor Day.

That being said, what to make of Texas?

Bank on the Longhorns showing up in several preseason polls despite three straight losing seasons and no real high level of success since 2009.

Remember last year? Texas started the season unranked, upset Notre Dame and jumped to No. 11 in Week 2. Then the Longhorns stumbled, fell out of the poll by October and finished 5-7.

Will some Texas fans be unabashedly optimistic? Yes, of course.

Is there long-term promise with new coach Tom Herman? Absolutely.

This feels like a program that should be receiving votes, however a spot in the preseason Associated Press Top 25 poll may be a tad much at the moment. Here are some reasons why:

Herman has been a dynamo since taking over for Charlie Strong. His brief-but-stunning record in two years at Houston (22-4) and 6-0 mark against ranked opponents is impressive. He’s energized virtually everyone inside the athletic department.

But the 2017 season is all about how Herman manages Strong’s roster. Like it or not, the national pundits remember this program lost to Kansas last season — 24-21 in overtime, for those who forgot.

Can Herman coax greatness from quarterback Shane Buechele or linebacker Malik Jefferson? Is Connor Williams truly one of the best left tackles in college football? Can P.J. Locke III lead the charge in the secondary? These players came to Texas to win. Now’s the time.

Will UT have one healthy running back?

Worries about the injury-plagued backfield were brushed aside during spring practice because … well, it was spring practice. Chris Warren III suffered a hamstring injury and ankle problems slowed Tristan Houston and newcomer Toniel Carter. Kirk Johnson also had a knee issue. At least in one practice, sophomore Kyle Porter was the only scholarship running back on the field.

Herman never had a running back amass more than 1,000 yards in his two seasons at Houston. Quarterback Greg Ward Jr. was a huge running threat. That’s not Buechele’s forté. The Horns need plenty of ballcarriers. Healthy ones, too. No running game increases the pressure on Buechele exponentially.

One of the most searing visuals from that Kansas loss was watching Charles Omenihu sitting on the field shouting, pouting and slamming his helmet. Right now, that’s his most memorable moment as a Longhorn. Naashon Hughes took a step backward last season too, with only 3.5 sacks after getting 5.5 in 2015.

Herman praised Poona Ford’s tenacity during spring drills. But Jordan Elliott transferred out in surprising fashion and Marcel Southall departed, too. Does this unit have enough playmakers?

Who is Joshua Rowland?

Herman blew off a question about UT’s special teams at the spring game. “The kicking game? It’s fine,” he said flatly. Um, is it?

Strong simply wanted a kicker who could convert from 40 yards and in. Senior Trent Domingue was 5 for 9 on field goals from 30-39 yards. Blocked kicks also were embarrassing moments against Notre Dame, California and Oklahoma State.

Transfer Joshua Rowland (Mississippi Gulf Coast Community College) connected from 36, 28 and 31 yards in the spring game. He will land in some intense pressure-cooker moments this fall.

Can this staff manage the Longhorns’ psyche?

Texas’ problem isn’t a lack of athleticism. It’s between the ears. It’s a program full of men who were highly successful in high school but haven’t won big at the college level. That’s not to say these are losers; they simply need to rediscover winning.

This is by far Herman’s biggest issue, it would appear. Think about this: Last year’s freshman and sophomores — half the roster — have never even played in a bowl game.

Herman’s biggest achievement at Houston was to get those players to believe. He can do that at Texas. That’s what makes the USC trip on Sept. 16 so intriguing. If the Longhorns can show out in September, then it’s likely they will rocket up the top 25 far faster than anything imaginable.