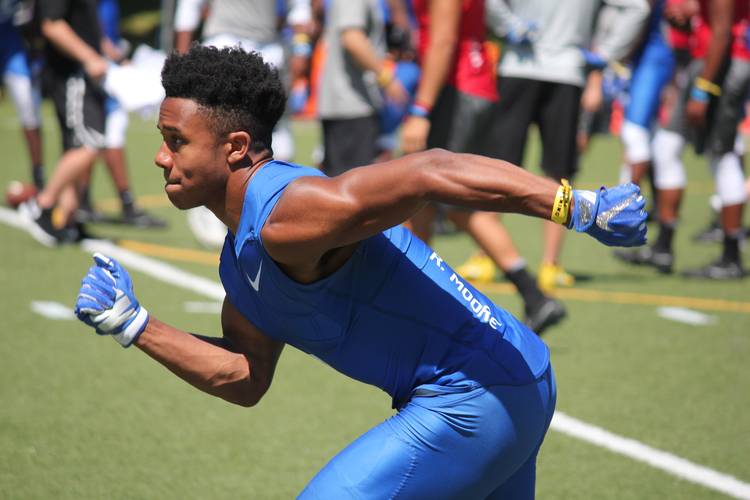 This is how the Longhorns would like to finish their 2018 class. We’ll start with the offense.

Others to watch: Tanner McKee

Texas’ big to-do at quarterback is to hold on to its two four-star pledges. Thompson, who’s from Oklahoma, and Rising, from California, are both potential all-conference prospects and each fits the mold of what Herman and Tim Beck prefer at quarterback. Rising is ranked No. 151 overall nationally, while Thompson checks in at No. 267.

The lone name to remember outside of the committed pair is McKee, who will serve a two-year mission after high school graduation and then enroll as a freshman before the 2020 season.

Others to watch: Harold Joiner

There’s young depth on the roster at running back. That made quality more important than quantity in 2018 after signing Toneil Carter and Daniel Young in 2017. Odds are Texas keeps Ingram and ends up signing only one running back this year. Ingram, a four-star prospect from Carthage, is the top-rated running back in the state and is the No. 157-ranked overall prospect in the country.

Joiner, from Alabama, listed Texas among his finalists, but expect him to end up elsewhere.

It’s a strong year for in-state wide receivers and Texas is in pursuit of a few. The lone commitment right now is Rondale Moore, a four-star slot receiver from Kentucky. Moore is a speedster who nearly won the 40-meter dash event at The Opening Final earlier this month.

Woodard is set to announce his decision on July 15; the Longhorns are considered the leaders for the four-star prospect out of Houston Lamar. Eagles was set to announce July 17, but moved that date back at The Opening. Still, Texas should feel secure in landing both Woodard and Eagles unless something changes between now and those commitment dates.

What will Texas do if it enters the season with Moore, Eagles and Woodard all pledged? My guess is the Longhorns would pursue in-state slot receiver Jaylen Waddle and chase Tommy Bush as well. Terrace Marshall has listed Texas in his top four, but the Louisiana native is expected to choose LSU.

Others to watch: Luke Ford

Texas signed two tight ends in 2017 and wouldn’t mind pulling off doing that again in 2018. The best in-state option is Malcolm Epps, a four-star tight end from Dekaney. He’s a long, lanky tight end with wide receiver abilities. The Longhorns need instant help at the position, so JUCO target Dominick Wood-Anderson is the priority at the position. He’s set to announce Aug. 1 with Texas competing with the likes of Oregon and Alabama.

Luke Ford is one of the top prep tight ends in the country and he’s set to visit Texas in July. Alabama and Auburn are his leaders, but Texas would happily find room for the 6-6, 248-pound four-star prospect who’s the No. 4-ranked tight end in the nation.

Texas went to West Texas to snatch Reese Moore early in the recruiting process. Moore, who plays football and basketball for Seminole, is an all-district tight end in high school but will transition to offensive tackle at Texas. That leaves the Longhorns in search for one more tackle and an interior lineman. If Texas can’t find the right fits, it could move to the JUCO ranks or wait until 2019 to load up in the trenches. Ghirmai, a four-star prospect from Frisco Wakeland, is the top target at tackle with out-of-state four-star prospect Trey Hill planning a visit to Texas in July.