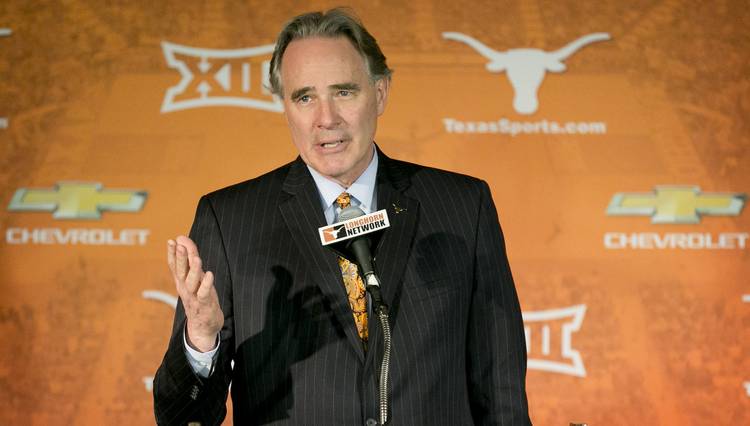 Steve Patterson’s next adventure involves requires a cool touch in one of the hottest cities in America — serving as the president and CEO of the NHL’s Arizona Coyotes.

“It’s a new day dawning out here, a lot of excitement around where we’re headed,” Patterson said in an interview with the American-Statesman. “Great future for all of us.”

The former Texas athletic director should be far more comfortable in the pro ecosystem. He certainly sounds recharged. As chief executive, Patterson will help oversee a reboot of the hockey franchise that hasn’t made the Stanley Cup playoffs since 2012 but wants a new arena for long-term viability.

“I think for me personally, we love the marketplace,” Patterson said. “Yasmin (his wife) and I kept our house. We love the Valley of the Sun. I think we need to figure out an arena solution. We need to grow the business side. Those are all things that fit my skill set.”

Patterson tried to use his professional “skill set” during his 22 months at UT. As athletic director from 2013-15, Patterson overhauled UT’s ticket operations, pushed beer and wine sales and hired coaches Charlie Strong and Shaka Smart. But some found his bruising style unacceptable.

UT President Gregory L. Fenves fired him in September 2015. At the time, both sides signed a non-disparagement agreement as part of the settlement. Patterson’s replacement, Mike Perrin, has been in charge of UT athletics ever since.

“I’m proud of what we got done in the short period of time,” Patterson said. “I’m really focused on moving forward. I hope (the Longhorns) do well. But I don’t spend a lot of time looking backward.

“We’re excited about being in Arizona again,” he added. “It’s a great state. Great community here … We’re going to have a lot of success with this franchise.”

Patterson is an NBA guy at heart, working with the Rockets and Blazers over the years. But he also served as the president, general manager and governor of the Houston Aeros hockey team. He won the 1995 Andy Mulligan Trophy as the International Hockey League’s executive of the year.

The Coyotes are going through a complete overhaul. Last month, Andrew Barroway bought out all minority owners and owns the team outright. Forbes put a $240-million price tag on the franchise. The magazine also estimated the franchise has $250 million in debt.

The Coyotes were 30-42-10 last season, finishing 12th in the Western Conference. The team just parted ways with coached Dave Tippett, who had worked in Phoenix for eight seasons. The team hired NHL lifer Rick Tocchet, 53, to take over coaching duties in what serves as an overall franchise reboot.

Patterson said the franchise will stick with 28-year-old general manager John Chayka. Asked about having a GM so young, Patterson said, “Hey, I was one of those once.”

It’s unclear how the arena situation will play out. In March, NHL commissioner Gary Bettman threatened to move the franchise out of Arizona if the state legislature did not approve $225 million in new funding for an arena. At the moment, there is nothing viable on the table.

The NHL contends the struggling franchise cannot survive financially in Glendale, Ariz., the Phoenix suburb that’s also home to University of Phoenix Stadium. The NHL would prefer a new arena in downtown Phoenix.

The arena issue will be front and center for Patterson going forward.

“I think the key for us is to make sure that we connect more broadly and deeply with the community as a whole,” he said. “Grow interest in the game of hockey, make sure they have a great fan experience, make sure they go away excited and engaged with the team.”