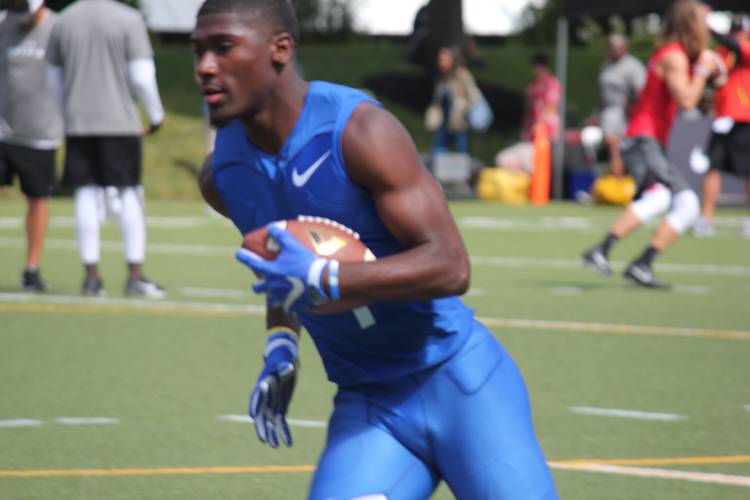 Here’s a closer look at Woodard.

Skill set: Woodard is a 6-1 outside receiver who held 31 offers. He ranks No. 13 on the Fabulous 55 and No. 68 nationally, per the 247Sports composite. Woodard became an impact player at Houston Lamar as a sophomore. He was named first-team all-district in 2015 after posting 25 receptions for 503 yards and five touchdowns.

The four-star improved his numbers as a junior. He was the District 18-6A MVP, recording 35 catches for 792 yards and 14 touchdowns. His production earned scholarship offers from elite programs like Ohio State, LSU and Texas A&M. Woodard raised his recruiting stock with a consistent performance at The Opening Final in Oregon earlier in July.

Woodard is a quick, explosive outside receiver with unusual strength for a prep wideout. He’s the best vertical threat in the state, excelling when he’s in 1-on-1 situations with cornerbacks. He makes up for his lack of ideal height with an excellent vertical. Woodard is also a physical player who will not shy away from blocking.

Immediate impact: Texas is stocked with young wide receiver talent. Woodard won’t be asked to immediately push for starting snaps. He’s still raw as a pass-catcher, relying on his body more than his hands. As he improves his route-running and receiving skills, he has the athleticism and physicality to make an impact by his second or third year. It’s not easy for young receivers to make immediate impacts in college.

Fitting into the program: Texas found the right recipe in Woodard. He’s an athletic player who’s competitive and football-focused. Woodard wants to be successful and he’s willing to play anywhere on the field. Woodard doesn’t mind working and we’ve learned Herman and his staff value that in football players.

Woodard likely won’t make an early impact because of the depth and nature of the wide receiver position, but he’s the type of player Herman wants in the ranks for the future of his program. Woodard is also one of three Houston Lamar prospects with a Texas offer. The Longhorns are in active pursuit of his teammates Anthony Cook and D’Shawn Jamison.

Recruiting at the position: Woodard joins out-of-state four-star prospect Rondale Moore as wide receiver commitments for 2018. Moore is a slot receiver, while Woodard can play outside or inside because of his 6-1 frame. The Longhorns aren’t done recruiting receivers. Texas is still in the running for Fab 55 members Brennan Eagles, Jaylen Waddle, Tommy Bush and Jaquayln Crawford. Texas wants to sign four in the cycle.